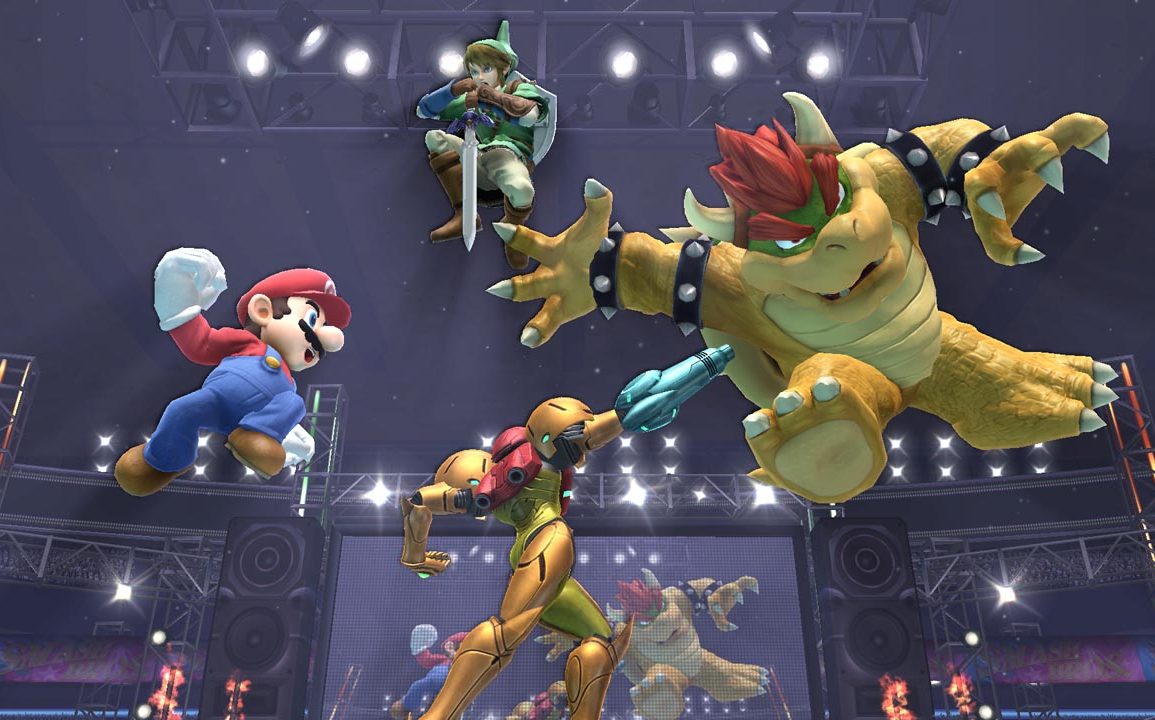 As Super Smash Bros. fans, we have truly been spoiled this year with not one, but two versions of Nintendo’s multi-mascot, all out brawl. If you’re a multi-platform gamer, you have truly been spoiled with some Triple-A titles hitting each system this month, but none greater than Super Smash Bros. for Wii U. Nintendo have brought the competition to it’s knees this month, with software sales for this title trumping not only the competitor’s exclusive, but the cross platform titles, with only the power and popularity of Smash Bros. It’s been a long 6 year wait for some, but Smash Bros. has finally returned, and it’s gorgeous. Nintendo’s mascots, duking it out in beautiful HD/60FPS? Yes, please. And we here today on DashGamer.com, have the review that will convince you to go and buy yourself a Wii U, just for this game alone. So, here is the DashGamer.com Review of Super Smash Bros. for Wii U.

Super Smash Bros. has always kept it’s tradition with characters keeping their movesets basic, yet effective. Fans will always scream out for the same balancing that Melee had, but Nintendo will always move forward with it’s series and try to “re-invent the wheel” somehow. While the gameplay may have not changed too much since it’s Wii predecessor, there are the general tweaks and upgrades that introduce itself within this wacky fighter. I found the new structure of Classic Mode refreshing, yet keeping true to the series roots, while being much more flexible to players choice. Being able to choose your opponents, from a group of four choices on screen is a refreshing spin on the stale random opponent, from previous entries.

Super Smash Bros. for 3DS introduced us to a unique mode “Smash Run”, the Wii U has upgraded this feature, naming it “Smash Tour”. While this mode may not be for the casual Smash Bros. player who wants to jump in and play, the mode turns Smash Bros. into a digital board game, almost derivative to Mario Party, and has your Mii’s attempt to collect as many power-ups and trophy’s on the board, as possible. Each item that it collected on the board will be put up for grabs if players bump into eachother, which will generate a random-rules match, with the winner earning the prize pool. 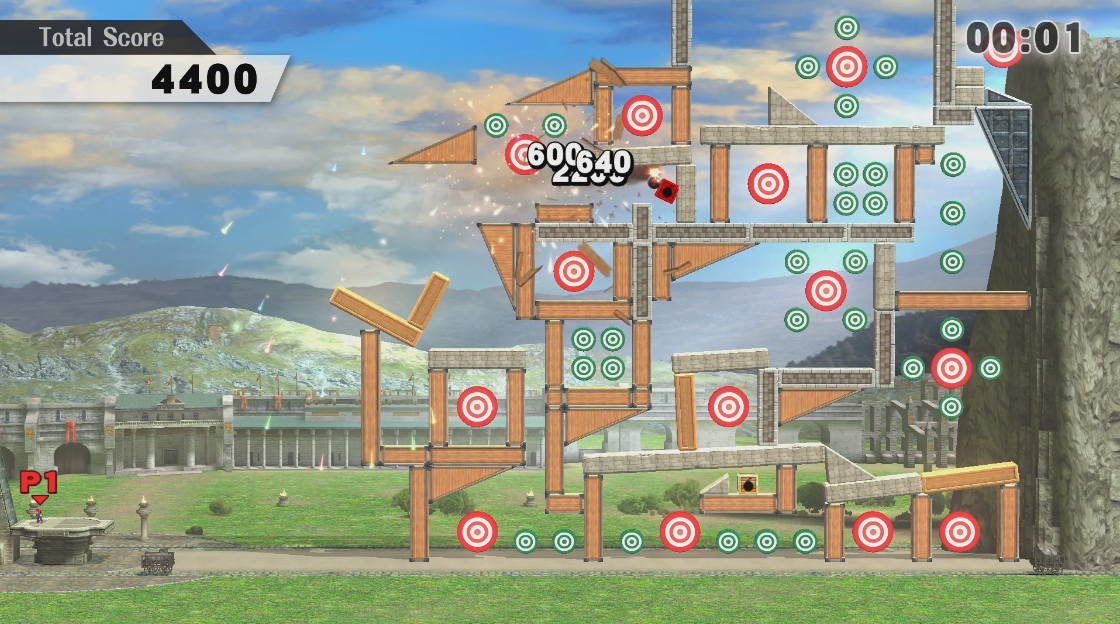 All-Star mode, Home Run Contest, and Multi-Man smash make their return here with minor cosmetic tweaks in each mode. Target Blast, takes Home-Run Contest, Break-the-Target’s and Angry Birds, blends them altogether and totally puts a new, refreshing, and quite addictive challenge infront of Smash Players. This mode does return from it’s debut from the 3DS, however this time with upgrades and tweaks. Now with a larger, and much heavier bomb, you will have to damage the bomb at almost double the percentage to launch it into the Angry Bird’s-esque structure, for it to take any damage.While stage builder does make it’s return to the Wii U, it’s hard to say whether there has been any upgrade here. While being much more flexible in how you may design your levels, the level will still set a limit on how much you actually put into it. There are a limited amount of themes, and styles you may choose once again, and when it comes to customisation, there isn’t much to go by. A minus here, there is no depot or hub for you to share, or download any custom levels… yet. There has been no confirmation from Nintendo on whether this is in the works, but I wouldn’t count on it. Nintendo have shown how protective they are of their product image in the past, and obviously would not want any custom “penis” levels made available for download. And yes, people have already made these type of levels, and have uploaded them to YouTube, for your viewing pleasure.Online? Forget it. At least for now. It’s Impossible to get a stable connection at the moment with the thousands of Smash players trying to not only play with friends within their region, but internationally. I found playing friends in the U.S. impossible, with an almost five second delay between what I pressed on the gamepad, and what was actioned on-screen. Until the hype dies down, I don’t see any use of jumping online anytime soon. The lack of in-game trend does not come to a surprise, as it has become a custom to Nintendo online titles. Much like Mario Kart 8, you will have a limited amount of time to taunt your friends in the lobby, before getting launched into battle, where your mic will awkwardly cut you off. 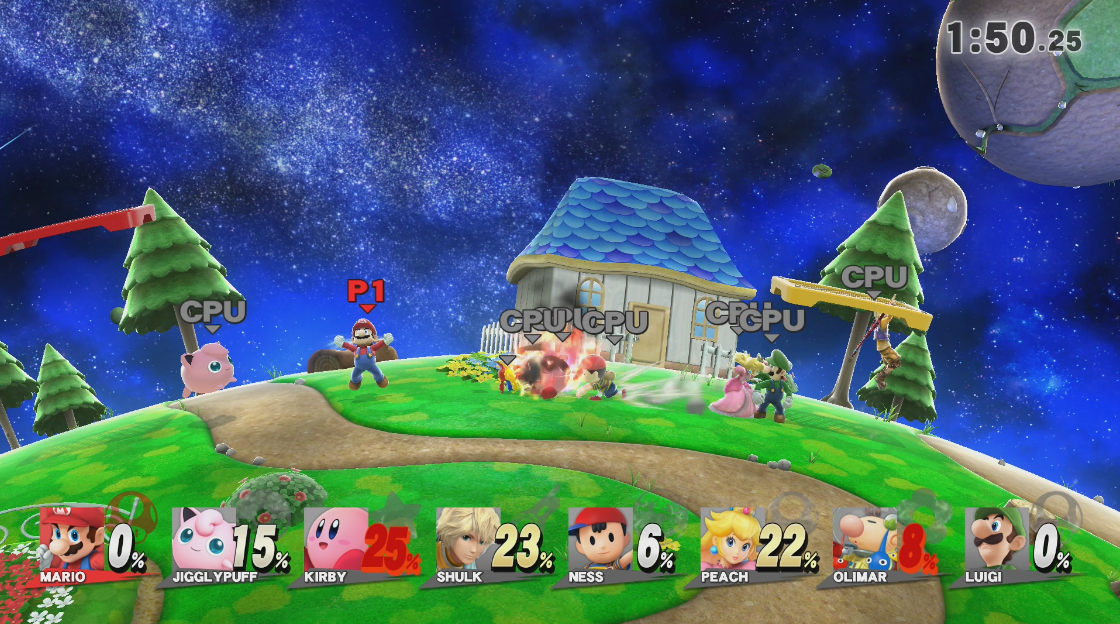 All those modes may seem cool, but here’s the cold hard facts. If you are purchasing, or have already purchased Super Smash Bros. for Wii U, you’re in it for one thing. The fight. So, jumping into Smash mode, playing up to 8-Player Smash, and having various ways of controlling your character, including the now rare GameCube adapter, is simply amazing. If you remember having a blast with your friends in traditional means of playing Multiplayer Smash, well you’re in for double the fun. No doubt though, that it can be a little overwhelming at first, especially with minimal selection of levels to play eight players with, but you will find it comfortable the more you play. Almost hard to go back to four players. Nintendo really are pushing the traditional means of in-house multiplayer, which gaming seriously lacks these days. It’s cool for guys like myself who grew up on Smash, to bust out those potato chips, gather a few beers, and play some awesome rounds with friends. Just seems right.

Amiibo integration is a cool novelty within the title, but may ware thin after a while with players. While being cool to own, training your Amiibo’s to be the ultimate Smash fighter may backfire on you. Reaching level 50 on your Mario figure will only enable your Mario figure to beat you into oblivion. As your Amiibo figure upgrades, you will find it almost impossible to play with. Nintendo may not se this as a problem, but it will eventually turn off the casual player, spoil it’s sales (which are on fire by the way), and will have fans turning back to Skylanders. Gamer like myself, who only buy Amiibo to collect, don’t see the appeal in using Amiibo’s in-game, unless you unlock exclusive DLC, much like Link’s figure unlocks exclusive content for Hyrule Warriors. None-the-less, it would have been cool if Nintendo had that feature in-built for launch.While this may seem like a negative spin on the Amiibo figures, they are awesomely manufactured, fantastic collectables, and takes nothing away from the experience you get from the game. No minus points here.

When it comes to making the promise of having full HD 1080p/60FPS these days, you can definitely rely on Nintendo keeping that promise. Super Smash Bros. for Wii U is stunning. The crisp graphics, and beautiful amount of detail put into characters, maps, and presentation definitely shows that Nintendo are willing to lift their game, and show their competitors that they can hang with the big boys, too. Nintendo knew they had to bring the big guns with Smash Bros., even with out-dated hardware. While Super Mario 3D World and Mario Kart shine on the Wii U, and definitely show what the hardware can truly do, Smash Bros. shows off the great gameplay, and interactivity that Nintendo bring to the table in 2014. In a world where gaming has gone online, Nintendo still strive for that “gather your friends and family” approach, which truly shines through in Smash. It may not be the absolute prettiest game on the Wii U thus far, but it certainly is the best Smash Bros. game to date. 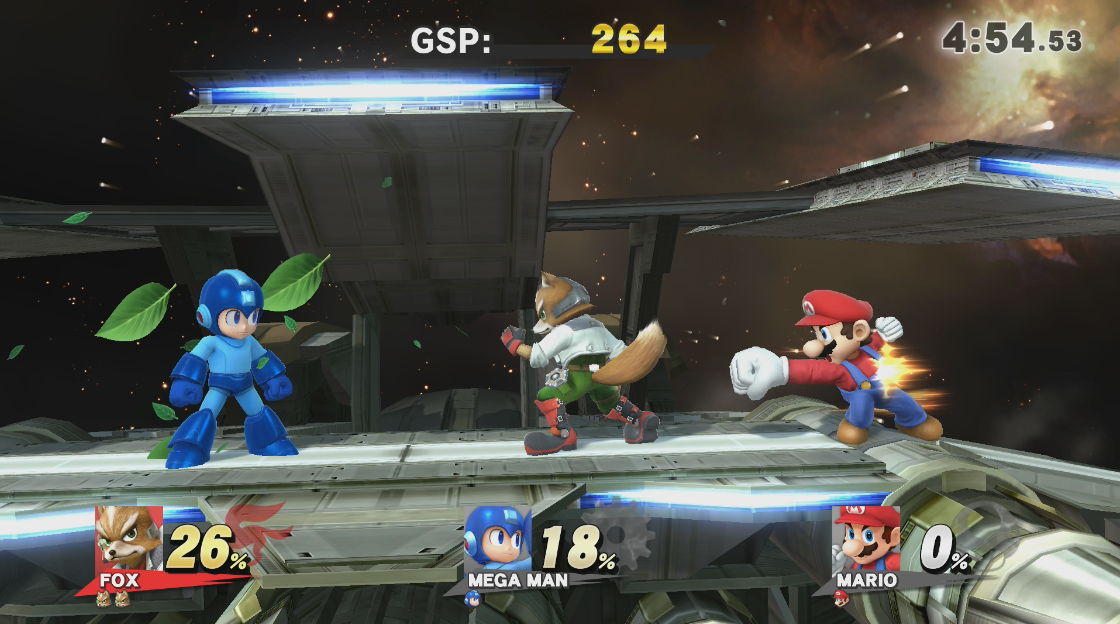 Music is a pivotal point to this title. While introducing new tracks to the franchise, we see some of our old favourites from the past surprise us. Heck, the first time I booted up the game, I expected to hear the brand new menu music, but was surprised by the memorable Super Smash Bros. BRAWL menu music. Once again, much like BRAWL, you can adjust this so that you can have randomised music play throughout your menu selections, levels, and maps, or just one specific track for each. You can once again, unlock classic and new tracks as you play. And there’s a whole lot of music to unlock.

As we mentioned, Eight player Smash can be a little overwhelming to begin with, but becomes much more comfortable as you play on.

However, we once again run into the problem of characters getting too small on-screen. Maps are gigantic, and can cause frustration for players who are on two opposite ends of the map. This causes the camera to pan way too far out, and causes characters you be completely shrunken down to almost dot sized ants, jumping around on screen. It’s a minor problem that you will notice at first, but you will barely notice as you continue to play. Almost to the point where going back to four player Smash will seem a little boring, and characters looking gigantic themselves. So it’s more of a 50/50 point. Not everyone will love it, but that’s cool.

Much like the 3DS Counterpart, menu’s are once again a headache. Nintendo had their better days back in Melee for Smash Bros Menu structure. Just finding “Classic” mode is a quest of it’s own. Different modes are spread out in different places for the game. It would be great if they trashed the whole big button menu scheme, and bought black the classic menu selection scheme that was introduced in the original Smash, and improved in Melee. It’s just too much of a time waster trying to find certain modes in menu’s, among menu’s, among menu’s. 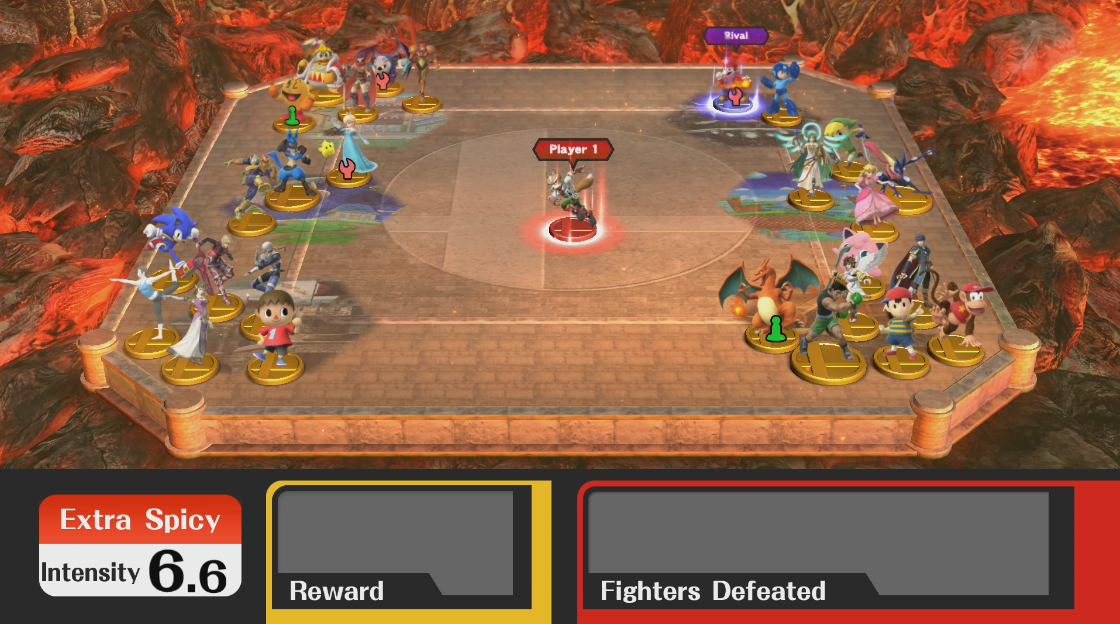 Level design is great in Smash for Wii U. While there’s nothing completely extravagant, it’s great to see some brand new levels to play on, and to the soundtracks that match, just makes it a whole lot better. Personally, Mega Man 2’s title theme remix just meshes well with the Smash environment, and make’s a Smash battle a whole lot better. While we do see some great original levels, Nintendo really do push the classic levels in this installment. I feel that it almost overpowers the new levels in a sense. Almost like there’s something to expect from Nintendo. DLC maybe? We can only hope here.

Nintendo are really pushing their big IP’s now, and the time is right. With Playstation 4 dominating the Market, Wii U is trailing behind now, with the XBOX One in dead last. Nintendo are now showing that they can be in this race to win again, and it’s with games like this that they can really do that. It should be noted though, Nintendo don’t push Triple-A titles out as often as the XBOX One or PS4, but when they do, it’s always developed to be a winner. Captain Toad: Trasure Tracker may not be a system seller, but will have people smitten over it’s cuteness when it launches in PAL regions next month. But Super Smash Bros. for Wii U is the system seller. And now with over 5 big name titles out on the system, there’s no excuse for why you should get a Wii U for Christmas this year. Parents who are complaining about Grand Theft Auto V, take notice. This is the game for you kids, and the system for them too. But not only for kids, but for gamers all round. Super Smash Bros. for Wii U is the ultimate Super Smash Bros. installment into the franchise. It’s compelling, it’s amazing, and it’s simply unadulterated fun. And that’s all we want in a video game. I mean, come on… it’s Smash Bros.