Let’s be honest, this was the last thing we expected Nintendo to unveil back in January’s Pokemon Direct. The question that lingered was, how many hours am I about to sink into another Pokemon game? Pokemon Mystery Dungeon: Blue/Red Rescue Team first released in September 2006, to a skeptical reception. Many advocates of the prime series were questioning Nintendo’s motives in turning the series into what could be only compared to as a Rogue-like Dungeon Crawler. With Chunsoft at the helm, there was no doubt that we were in for quite the narrative that explains why our hero mysteriously wakes up one day as a Pokemon. If there is one thing Chunsoft have always taken pride in, it’s their incredible story telling and they sure delivered with the original entries into the Mystery Dungeon Saga. So it came to no surprise how delighted many faithful fans were to see a Pokemon cult hit return. To give some perspective, in 2005, I was in the penultimate year in high school at 16 years old. I was deep into playing anything and everything Nintendo at the time, with every bit of me excited for the impending “Nintendo Revolution” on it’s way the following year. With that, when this title was released I was assured to pick it and play it non-stop, in which I did. I believe my first playthrough of the title was around 130+ hours.

So you bet I was ecstatic to see a remastered version of Mystery Dungeon hitting the Nintendo Switch. My excitement could not be contained from it’s reveal once upon learning that it’s original developers, the now Spike Chunsoft, were once again taking the reigns of this project to not only remaster, but rebuild the title’s entire engine from the ground up. As a fan of JRPG’s and Dungeon Crawling this had me salivating at the thought of diving right back in and revisiting each dungeon with the prospect of brand new mechanics, possibly some new Pokemon I’ve never heard of, and a fresh lick of paint applied to this masterpiece. While I did have some trepidation towards some elements making their return to the remaster, such as recycled dungeon design and lack of UX/UI during boss battles, I must admit the remaster pulls this off with ease almost making the features seem passe’ in some regard. While this may vary from person to person, I think having additional UI in regards to boss battles is still a must.

If you are unfamiliar with the core gameplay and plot, the title starts off with choosing your protagonists gender, which in turn becomes almost irrelevant as you wake up one morning as a Pokemon. Suffering from “Pokeduced” Amnesia (That’s not even a real word), you begin to traverse through a world devastated after cataclysmic events that all happen while you were sound asleep. Pokemon are heavy sleepers after all, right Jigglypuff? With your mission set to save the world from impending doom, you buddy-up with a group of friendly Pokemon and form the Rescue Team. It is your duty to save other Pokemon from peril. Your antagonists throughout the story, dubbed “Team Meanies” consist of notorious Pokemon Enkans, Gengar and Medicham who seek to world domination. Their path parallel’s the Rescue Team, while destroying everything that gets in their way. Our protagonist is informed of a legend known as Ninetales, who had hexed a curse on a human who had wilfully decides one day to foolishly to grab onto their tail.

Ninetales then stated that the human would be re-incarnated into the world as a Pokemon, so it would shift the balance of the universe, ultimately aggravating it. Now, it is up to our Rescue Team to recover our lost memories and train ourselves to become the ultimate Pokemon Party. From the menu screen, you will be given a random personality quiz with a flurry of questions that determine your character, which matches you up with a random Pokemon (Bulbasaur, Squirtle, Charmander, Cyndaquil, Totodile, Chikorita, Treecko, Torchic, Mudkip, Pikachu, Eevee, Machop, Cubone, Psyduck, Meowth, and Skitty). You will be given the choice to tag-team with a partner Pokemon from the list stated. From there, you are given a copious amount of objectives to complete. These are either initiated through plot events, placed on the bulletin board, a mail request, or will be given once a Pokemon has been rescued. Delivering items and escorting Pokemon are also tasks that are given, and if successful, you will receive rescue points at the end of each mission to rank-up your team.

Missions mainly take place within each dungeon, with each layout randomised every visit. One concern I did have was while each map may have been different, they actually were the same. There was repetitive use of level design once again, much like the original. My thought process here would have determined that due to hardware limitations on the NintendoDS, we would not experience the same design in it’s Switch incarnation. I do have to say, keeping it faithful to the original gives an authentic vibe which is appreciated. With each layout pending entry, your mission is to finish each job presented, scurry through multiple floors of the dungeon and then find its exit. Of course, this is a Pokemon title so it goes without saying that you will encounter hostile Pokemon who are ready for battle. This is where the title shines with its incredible turn-based mechanics and unique fighting skills. Your Rescue Team consists of four physical attacks, or using projectiles with other items.

Of course, revitilising your Pokemon’s health is crucial to your survival so it’s best to purchase food before entering each dungeon. With that said, you may find scraps laying to regenerate health within dungeons but are scattered infrequently, and spread quite thin. Much like any modern turn-based JPRG, if your team leader (which is your protagonist) falls, your entire team will be defeated. If any party members fall, they will return to base in which you may retrieve them afterwards. Playing this in handheld felt very natural, almost a homecoming to the original entry on the NintendoDS. There was nothing like popping that lid open on the dual screen handheld and jumping into the mystique of Mystery Dungeon. The title feels quite solid, and right at home on the Nintendo Switch. I must say that I was certainly impressed with how fluid and natural it all came back as an experienced player. I expected to re-train myself into the entire experience, but it was like “riding a bicycle”. For newcomers however, I could see how it may discourage you from your experience and dedication to the main series.

My message to you is, don’t fret. It’s still an amazing Pokemon title that surely deserves your attention. It’s presentation is incredible with a vibrant almost “Painterliness” art style that pops. Each Pokemon’s emotion shines through its bubbly atmosphere, with incredible terrain design that will leave any beloved fan of this historic franchise in awe. My only disappointment is docked mode. This title should not be displayed on a large screen, it takes away the beauty of the entire experience. It honestly felt like the image was up-scaled from the display’s pixel density. It did not feel natural at all, so I would avoid it and just appreciate the title as it was meant to be played, right in the palm of your hands. From booting to the title’s menu screen, right when that first note hits, you know that Keisuke Ito was set to put all his love and attention into remastering Arata Iiyoshi’s incredible compositions from it’s original soundtrack. Hearing the echoes of Run away, Fugitives was like going back in time, with its intrinsic old school chiptune riffs; completely mesmerising. For anyone that is familiar with how great this soundtrack is, you will fall in love with the remastered arrangements added into the complete experience.

Pokemon Mystery Dungeon: Rescue Team DX is a love letter to its cult following. Don’t get me wrong, its purpose does serve for people who are intrigued by its legendary status amongst Pokemon fans, and gamers within the community. Sure, it was met with a mixed reception due to its outlandish contrast in gameplay from what is expected in the mainline series, but it delivers promise in quality. You are given a glimpse into the world of Pokemon from their perspective. It was such a unique feeling to traverse many parts of the world as a Pokemon, rather than a human protagonist and to revisit that experience once again had me giddy. I am no doubt impressed with Mystery Dungeon’s remaster. From its initial reveal, to its stunning redesign, its core gameplay and improved physics, right down to every bit of detail that remains faithful. Pokemon Mystery Dungeon: Rescue Team DX is an essential experience for any Pokemon faithful, and one they will treasure for years to come. 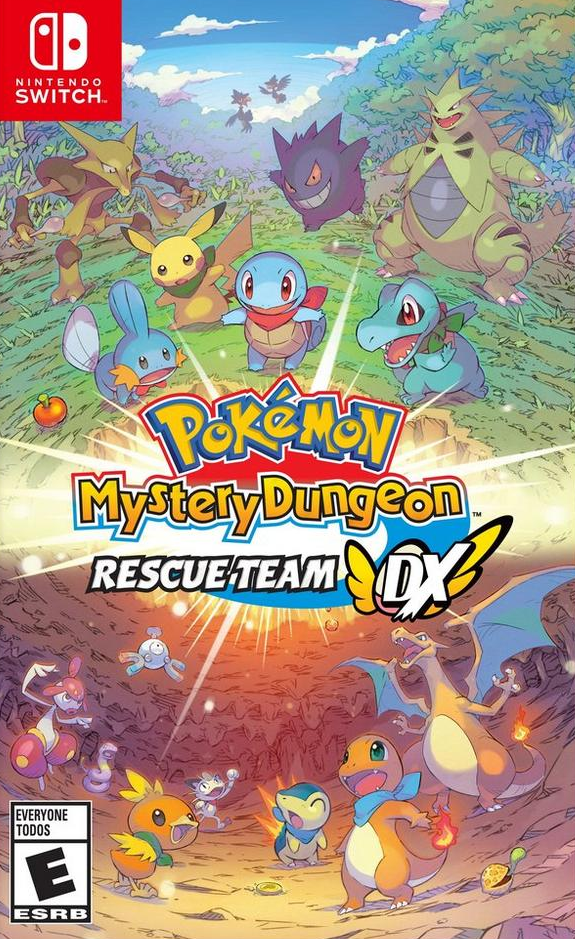