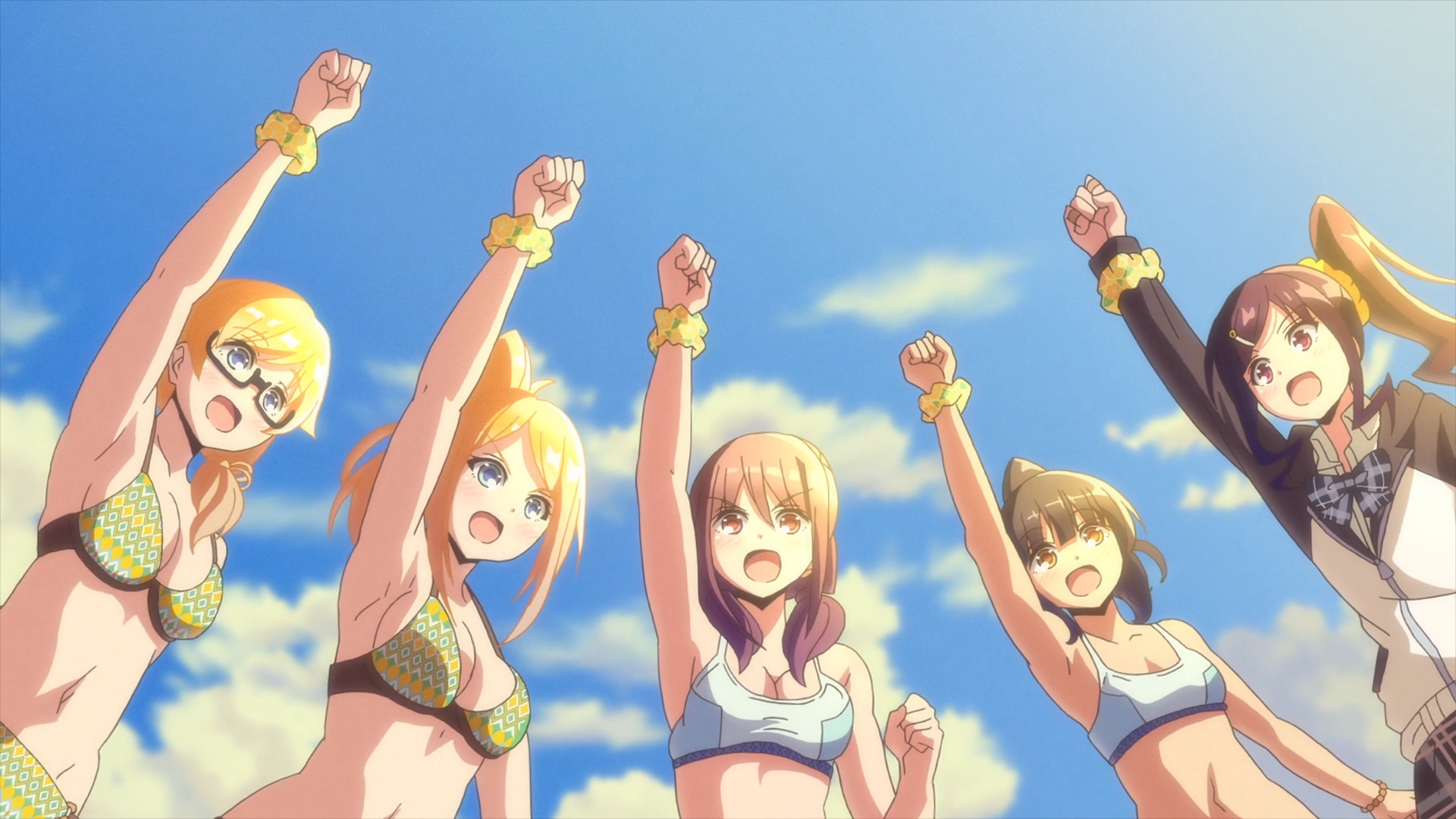 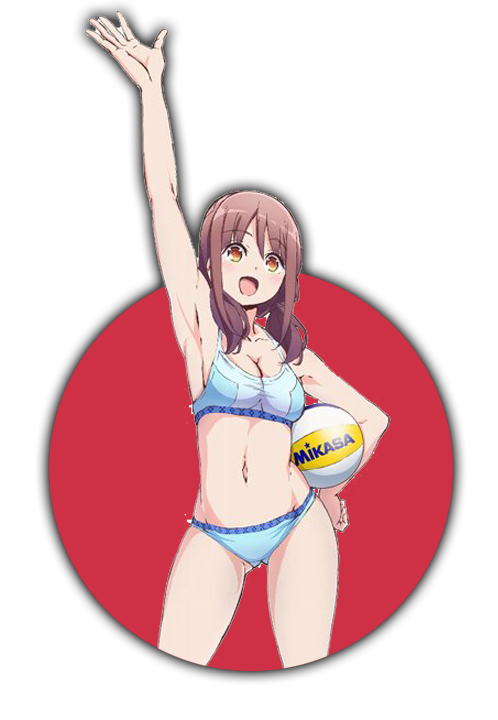 Ah yes, the notorious - as ever controversial - fanservice anime. Well, it's not really a genre, but a fan labelled category in itself. Rightfully, Harukana Receive falls into the Sports Anime genre, with its prime focus on Beach Volleyball. Again, not in my wheelhouse of common shows I dabble in, but we're trying some new stuff this year and I thought that this was a far deviation from the norm. But it begs the question, does fanservice type anime actually reveal charm? Do we feel an attachment to these characters through the risque imagery it imposes? Let's be honest here, the general consumer of this style content is not looking for a solid storyline. It's like the cliche' male buying a Playboy magazine for the "plot". However, Harukana Receive does infact have a solid premise that had me gripped. By the series climax, I was cheering on our team of steadfast, ambitious athletes, as they went about proving themselves as the best of the best in the urban sport.

After the success of Silver Pole Flowers, Nyoijizai (a pseudonym used by the anonymous mangaka creator, meaning "free staff") began penning the plot for the sport style Manga in early 2015. Their first chapter was published in Houbunsha's Manga Time Kirara Forward magazine's October 2015 issue and continued its run until November, 2020. A tankobon novelisation of each respective chapter was released later on after all 10 Volumes were licensed by Seven Seas Entertainment, and had been localised for a North American Release. Upon hitting critical acclaim and garnering a cult following, the series had been commissioned for an industry standard 12 episode Anime adaptation, with Japanese Studio C2C heading up production. Toshiyuki Kubooka (Beserk, Nadia: The secret of Blue Water) was assigned Series Director of the Anime, along with Touko Machida (Yi-Gi-Oh!, Pokemon) as Lead musical composer and Takeshi Oda supervising the character animation department.

Uprooting to Okinawa to live with her Grandmother, Haruka Ozora aspires to be an ace Beach Volleyball player. The young teen loves the great outdoors, and an athletic lifestyle to match. The outgoing highschooler is quite sensitive towards her tall height, and compares herself to others her age with smaller physiques. Her cousin, Kanata Higa, shares her cousin’s ambition in becoming a volleyball player but her small stature weighs heavily on her mindset. Having second thoughts on joining her cousin’s team, Haruka convinces her cousin to help lead the pair as vice captain, as they scout other talent from Umuru High Beach Volleyball Club. While traversing the sandy shores of bayside Okinawa, Haruka is confronted by two highly skilled players practising. The gazing competitor watches on and makes a quip regarding her skills being “ace”. Offending the participating pair, Narumi Toi and Ayasa Zachibana challenge both Haruka and Kanata to a sudden death match.

Having history with Narumi, Kanata insists on Haruka backing off, but the confident captain coerces her cousin into the challenge. Unprepared, Haruka’s serve is immediately retorted with such ferocity. Narumi tries to explain to the pair that without synergy, they would have no hope in becoming ace beach volleyball players, especially within the Okinawa region. Expecting the tall brunette to be completely heartbroken, her words light a fire underneath the bubbly protagonist, exclaiming her excitement towards teaming with her cousin and taking on others within the town. Baffled by Haruka’s enthusiasm, Narumi and Ayasa offer to help train both Haruka and Kanata. The younger of the pair hesitant as we learn that Kanata’s former Beach Volleyball partner was Narumi. After a falling out between the pair, Narumi went on to become high school champion of the club, leaving Kanata behind.

After Ayasa reveals this to Haruka, she then downplays Kanata’s skills telling the confident captain that her cousin had an issue with concentrating on her mark, completely avoiding the ball. Haruka doubts her opponents, defending Kanata. Elated from overhearing Haruka, Kanata is encouraged to face her fears and suddenly appears in her old beach volleyball team uniform, the same attire she wore while training with Narumi. The pair set forth in their challenge against the champions in hopes of proving them wrong. Up for the challenge, the duo topple expectations and are quick to stay on par with the experienced volleyball team. Breaking a sweat, Narumi tries to dispel the amateur team of their determination by unnerving Kanata. With Haruka and her cousin planning their cut shot, she tells Kanata to receive the ball and not to be afraid. Narumi returns the pair’s offense, aiming directly towards her former partner, with Kanata catching Narumi completely off guard and scoring the point. The pair celebrate their win, with the champions left shocked. Narumi apologises to Kanata for her past behaviour. Haruka explains to Narumi that there was no reason for apologies, as she helped Kanata overcome her fears, once and for all. She was a better partner than they anticipated. 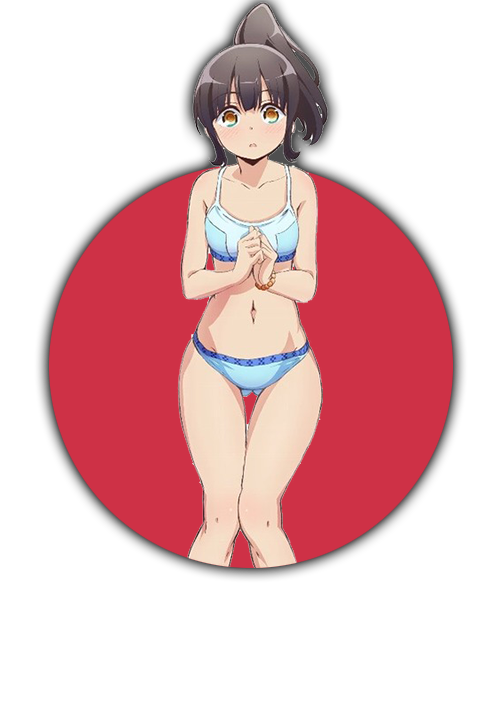 Okay, real talk. This is not an Anime series that will have you encapsulated over its intense story. If anything its narrative is quite barebones. The animation however, is absolutely stunning; a prime example of exemplary magnificence. A Frame-by-frame, silky smooth delivery from a wholly vibrant atmosphere, personifies you purview. Other than the character design, the environment is art. Truly a gorgeous overlay surrounds each scene so the eye-candy is additional, but again the series does not hide the fact that its truly fanservice. There are a ton of Japanese animation that like to demonstrate this with subtlety, but Harukana Receive proudly boasts its sex appeal from start to finish. It’s not Ecchi levels of innuendo, but it is heavily implied that you’re watching a bunch of teenage girls in skimp bikini’s, sweat and play beach volleyball. So sure, above its attempt to charm the audience with an encouraging story of triumph, its filled with gripping set pieces and sequences that do have you cheering for our team of favourites.

Haruka’s resolve does diversify the series’ overall presence, with her will to be the best along with her infectious enthusiasm. Her personality does assist in heightening each episodic fallout, making for a binge worthy season of mindless fun. I would describe it as the equivalent of “Anime junk food”; You know it’s not the best, but it’s still so good. I did enjoy the assortment of protagonists and antagonists delivered throughout its quirky plot, each showing a lofty cavalcade of diverse personalities. Revealed later in the series, Haruka’s backstory sheds light in why the youngster was made to move across the country to live with her grandmother, and does make an emphatic impact on the way you perceive her personality and promise in life.

Would the series had benefit from a narrative as equally strong of its visual imposition to balance out its viewership dividing fanservice? Possibly. But again, its a sport anime. Traditionally, sport anime’s depend on its action rather than its plotline, and here we have two very polarising categories combining forces, placing itself in an ambitious attempt to be an effective comedy-drama. I give Harukana Receive its due diligence however, as its plot makes an attempt to encourage its leading group of young females to lay claim of the toughest, strongest and supportive team. The show tries to teach the importance of sportsmanship; a tried and true delivery in fair exhibition and how everyone, no matter their size or stature, their fears or fantasies, their dreams and aspirations, all deserve a fair go. This premise alone furthers the entire plot’s resolve, leaving for some memorable moments. Reflecting on Harukana Receive, I would not label it a complete wash-out of eye-candy, nor would I say that its story has no value towards its overarching purpose. Sure, it’s controversial for its depiction but its quality of life is ensured by its gorgeous animation, zany cast, and Haruka’s own inspirational tale. Harukana Receive is pretty solid, and most certainly worth the watch.

In beach volleyball, there is no room for aces. To achieve victory, each player must find their one, irreplaceable partner that they can rely on in the court of sand. At least, that is what Haruka Oozora learns on her first day in Okinawa after moving in with her grandmother and her cousin Kanata Higa. 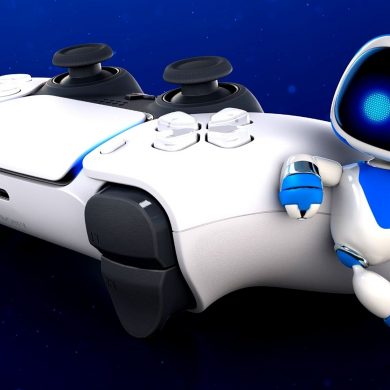