Can Anime relax you? Well, it’s an odd feeling. They call it “Body Transfer Illusion”. Manipulation of of sensory signals which correlate with one’s own body. While it’s usually induced via displays of “Body Ownership”, there are cases where emotional feelings are translated through visuals shown, whether they are real people, CGI, or animated. It’s also similar to when a Movie or Television show connects with us emotionally, whether it makes us sad, happy, disappointed, or elated. Sitting down and watching the very first episode of The Helpful Fox Senko-San (Sewayaki Kitsune no Senko-san) at night, made for a very relaxing experience. This series actually aims at doing this, while telling a great tale almost inspired by old school childhood book-like stories. Now, there are moments here that are totally not innocent at all, because it’s Anime of course. And while the series may emulate a “Slice-of-life” style in genre, it’s slated as a Comedy. And while being adapted by a newer Manga, the series tries to correlate with what an older style “Slice-of-life/Romedy” Anime would be like. Now, to compare this to such classic Slice-of-life series like Fruit’s Basket, is out of the question. This series unequivocally knows that it’s not to be taken seriously. It’s definitely “weeb junk food”, that you turn on for mindless viewing, and for some reason it had it’s hook. I believe the reason I kept returning to this series was due to it’s unique nature in plot, even trying to get an agenda across to it’s audience to always take care of yourself first, relax, and enjoy your time in life. Something I try to do on the daily, but when living life in the fast lane, it gets hard.

None the less, Senko-San follows it’s titular character Senko, an 800 Year old Fox demi-god, who has been sent to earth to ease life’s stresses of an average working-class man known as Kuroto Nakano. Nakano works for an exploitative company, that occupies most of, if not all of his free time. Over time, he develops stress and depression which the Anime characterises figuratively as “darkness”. An aura that overtakes Nakano, that visibly is killing any motivation and happiness he has. Senko has been given the task to pamper, and care for Nakano in any of his free time, to relieve any of life’s responsibilities. Wow, what a reality we all wish we could live in right? Of course, we’re talking about Anime here, where the imaginable tries to defy all possibilities. We would all love to ditch all of our responsibilities once in a while. But of course, this is not entirely the message that they are trying to convey here. Life’s stresses may get you down, but down let it overtake you.

Throughout the series, there are important points that are thrown across such as socialising, and meeting new friends. Along the way, Senko and Nakano befriend Yasuko Koenji, the young, aspiring manga artist who currently is a university student living in the same apartment complex as Nakano. While Nakano works all day and experiences the around the clock, Nine-to-five work life, Koenji stays at home, mostly spending her time at her working station, drawing and writing manga. She leads a lazy lifestyle eating microwaved meals, and is quite messy. This is where we also meet Shiro, a far more conceited fox demi-god who has come to earth looking for Senko to return to their home and cook for her. Shiro later befriends Koenji, but also adopts her lifestyle of almost sloth, while eating and watching Anime all day, while waiting for prepped meals made my Senko next door.

So while I would like to talk about the animation of the series, I would like to address design first. Adapted from the original manga series, the character design in the Anime is a little different to standard Anime character design. Using sharper shapes, and lighter tones to display the series relaxed vibe, and it’s unrealistic plot line. Of course, the series displays the standard tropes in Japanese animation, but it’s designed beautifully to separate itself from your standard, run-of-the-mill Anime. Fluid animation, and great design stand out entirely here. While the series centers itself almost entirely in three to four settings, that being Nakano’s apartment, his workplace, Koenji’s apartment, and sometimes the street they live in, it’s rare that we see other settings in the series, but when they are shown, they’re quite beautifully animated.

With that, the series light-heartedness is it’s selling point. There is not a point in this series where you will leave frustrated from anything. The only thing I found myself questioning is Senko’s motives, as to why she felt compelled to help Nakano relieve his stress, and pamper him. Was it love? Was it a task set? I wasn’t entirely too sure to be honest. None the less, you forget this entirely, and just enjoy the series for it’s mindless fun, it’s lighthearted plot, it’s message of wellbeing to it’s viewers, and understanding of how life’s stresses should not hold you down. I believe there is a callout here for a specific audience that can’t find the supposed “light at the end of the tunnel”. The everyday folk who deal with life’s hardship, and the stresses that come with it. To roll with the punches, because everything will be okay. While it’s not necessarily an agenda, it’s definitely a strong message, and one I truly appreciate.

Now, Euphemisms and sexual traits do make for some uncomfortable, and hilarious moments depending on the situation. There is the ongoing gag that Senko’s tail give Nakano complete relief, to the point of passing out. While there are moments where Senko’s referred to as a little girl, due to her character design and appearance being made of that, but downplayed as she constantly reminds Nakano that she is over 800 years old. It does play on an “Ecchi” side of the Anime genre a little here, while maintaining it’s Slice-of-life style genre entirely. It does not throw anything in your face here, while trying to sell it’s story, and not be boring at all. The Slice-of-life genre is a risky one for Anime culture, as it’s a 50:50 shot of being a success or failure. Personally, I can say that Senko-San is intriguing enough, at least for myself to watch the whole series entirely, and enjoy.

The Helpful Fox Senko-San, was an interesting experience. It’s soothing tones, calming resonance, and complete self-awareness made this series and easy one to be attracted to. I personally found myself watching this series, week by week late Thursday Nights just before bed, as almost an ASMR like session. Almost a meditating experience. While it may try to enrich one’s state of relaxation, it’s quirky characters, interesting plot, and beautiful animation makes it a great series in itself. While once again, it may not be a Fruit’s Basket, or a top tier Anime series, Senko-San really is just worth a watch if you have some spare time, and are an Anime fan. It’s just great mindless fun, and I personally enjoyed this. And I think you will too. 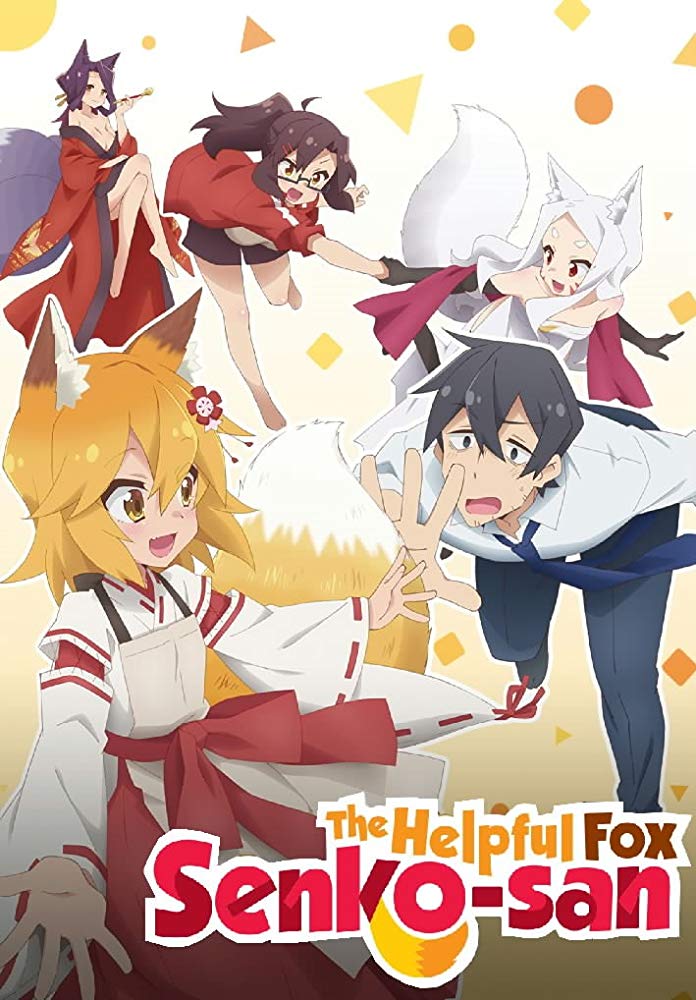 The everyday life of Nakano, a salaryman working for an exploitative company, is suddenly intruded upon by the fox, Senko-san (800-year-old little girl). Whether it be cooking, cleaning, or special service(?) – she’ll heal his exhaustion with her tender “care.”