Lack of of offline unlockables

Little to no customization

Team work makes the dream work, as they say. Team Sonic Racing implements everything that has been great about the Sonic Racing series thus far, adds a whole lot more to it, then throws a multitude of different ways to make sure your strategically playing a team kart racing game correctly. It’s not always about reaching the finish line first, it’s all about making sure you have your team mates with coming across with you. It’s always a tough one reviewing a kart racer, as most kart racers these days aim to become greater than the gold standard in the Mario Kart series. However, I can say with full confidence here, that Team Sonic Racing has hit it’s stride here, with its wacky and zany ways of tackling and improving on what we see in the standard on track kart racer. As someone who has been pessimistic on the series for some time now, it was refreshing to complete this campaign and come off completely satisfied with what I played here. Now, the game is not perfect, much like any kart racer out there, but with what SEGA has to offer here as an alternative to Mario Kart, fans of the genre should be happy with the unique styles offered here. Of course, we’re greeted with the cast of our lovable Sonic crew that will take us through this somewhat straight-forward campaign.

You will select your character at the selection screen, with your team automatically chose for you based on which character you do decide to choose. As soon as you start here, there is an immediate difference in the way you would play your generic kart racer, as you’re introduced to multiple paths in different tracks, where Items and rings may be scattered in different locations, so you may have to choose wisely here, not for just yourself, but your team. Having to make sure your rankings stay near the top, you will have to base your racing on complete strategy and use your items carefully to take out any of your opponents that not only get in your way, but your teammates. An additional feature here to help boost not only your speed, but your position and ranking, is the sling-shot. All members of each team will leave behind a glowing yellow trail, essentially what Mario Kart has with the “speed streams” where you mimmick your team mates path in front of you to gain momentum, and sling shot ahead. It can somewhat be cumbersome and detrimental at times to use this, but it definitely will help you, and your team to reach first place here.

The amazing presentation here in track design, is refreshing and original. Something that hasn’t been seen in kart racing for quite some time. It’s been a bold move here by SEGA to release a kart racer right before the remastered Crash Team Racing, but I believe that they really do have something on their hands here for fans of the Sonic franchise. Jumping in and choosing from a multitude of tracks offered to you from the Sonic the Hedgehog universe, is truly a gamers buffet. From top-down you can definitely tell there was love, not only put into the track’s layout but graphically immense detail, into every inch. It’s something I put on par with the initial reveal of Mario Kart 8. I also put the game play on par with Mario Kart 8. I mean, it’s honestly hard not to with a formula that’s not so hard to emulate, or re-create. The one thing that does worry me here though, is how remarkably re-designed Vicarious Visions Crash Team Racing’s Remaster already looks here, and how visually appealing it may sell over Team Sonic Racing. Team Sonic Racing is as visually stunning, and well crafted kart racer as you will find any on the market today, but it definitely is a risk here to put it up against possibly the biggest kart racing release this year.

Team Sonic Racing’s is Sonic, through and through here. The up-beat tempo that presents itself perfectly paced here is certainly welcome, and reminds me of a whole lot of past arcade racers that SEGA have published in the past. You definitely get the feeling of being in an arcade with the soundtrack blaring in the background with it’s fast tempo heavy beats, the announcer telling you each item in your inventory, which lap you’re in, and every time you get a boost. It’s somewhat welcome at first, but the welcome does wear off near the end of the campaign, as it does come off repetitive. It’s still a fresh take, but nothing that’s completely new to the series. Still, tugs a string in my nostalgic heart, as it takes me back to playing racers in arcades. Character voices however, repetitive is a bold understatement here. Characters will constantly tell you that they’re falling behind unless they are in first place, or that they need a hand, even if they honestly don’t. Somewhat poor AI implemented there. A lack of lines given to each character as well, as the CPU’s own repeated lines that aren’t subtle, but pretty much in your face and heard multiple times in each race can be real annoying, but once again, this comes in form of old school arcade racers, but not totally sure that this can be excused though.

Team Sonic Racing’s a welcome addition to the Kart Racing genre. Sure, it’s not perfect by any stretch of the imagination. But for what is offered here, is amazing. From an original and unique take on the kart racing genre, with it’s team work style, it’s amazing layouts, cast of lovable characters from it’s historic franchise, and it’s incredible presentation and beautifully crafted world, it would make a welcome addition to anyone’s kart racing collection. I did play this on the PlayStation 4 for this review, but did get my hands on the Nintendo Switch version of the title as well. I must say that they are totally on par with each other in terms of everything I have listed above. Gameplay, Graphics, Design, and Sound. If I were to pick this up, I would totally recommend grabbing this bad boy on the Switch. Having this title on the go is much more appealing, and would definitely get more of a kick out of playing this game on a lunch break, or even trips on transport. As a fan of the kart racing genre, I totally love what they have done with this title, and am now excited to see the prospects of what’s to come in the future for the Sonic Racing series. 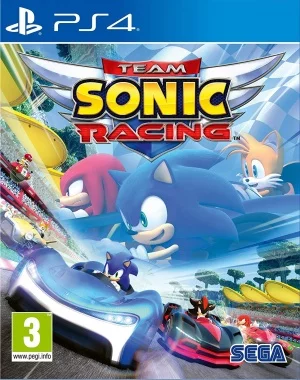 Team Sonic Racing is a 2019 kart racing game and a spinoff from Sega’s Sonic the Hedgehog series. Controlling one of 15 characters from the series’ cast, players compete in races using sports cars. They view gameplay from a third-person perspective while performing tricks, drifting, and collecting power-ups.