I’m a huge fan of One Punch Man. It is critically acclaimed as one of the best Anime/Manga series of all time. ONE‘s premise behind such a creative franchise has left an everlasting impression on Otaku’s worldwide. It presents itself differently from various seasonal Anime, with it’s dynamic presence, original character design, and randomly paced plot-line. It’s a bold risk to assert such a scattered story, yet One Punch Man tell’s it’s tale in solid fashion. With this said, Mob Psycho 100 follows in-suit with such machination. While it’s tough to gauge this series from simply watching it’s first two episodes, it latched into me with such resonance as it’s creator’s predecessor. It’s impressive animation that defies logic in all sense of the word, it’s zany characters that echo what we have seen from ONE’s creation’s beforehand, and an action-comedy that will have you absolutely joshing at how gullible some unearthly characters really are.

Mob Psycho 100 (Mobu Saiko Hyaku) began publication on April 18, 2012 on Ura Sunday, Weekly Shonen’s Sunday magazine, and Shogakukan’s MangaONE mobile app. After claiming critical success, it had it’s first independent volume published later that year on November 16, 2012. The Manga had garnered acclaim, due to it’s creator’s established reputation amongst the community and was fast tracked to become one of Japan’s biggest Manga series of 2013, where it currently has published 16 volumes as of September, 2019. Due to the localisation, and popularity of the Anime adaption, the manga has only just began translation in the western hemisphere, with the license recently being acquired by Dark Horse Comics. There have only been 3 volumes translated thus far, with the fourth volume scheduled for release in the new year. Anime Studio Bones, currently produce the Animated Television series, where there have been two season’s commissioned. AnimeLab currently have the first twelve episodes of the entire series run, readily available on-demand.

Shigeo Kageyama, or better known as Mob, is our gullible protagonist through this nonsense. An eighth grade telekinetic, wonder-boy that contrasts his abilities with his insanely lax personality. He shares a similar vibe from our favourite super hero, Saitama with his blank stare, yet incredible power. While he understands his powers, he finds them to be an intrusion to who he really wants to be… just your ordinary average high school student, trying to make his way through life. But this all plays in part with Mob’s ability, to self destruct and unleash his full potential. Mob keeps his personality and emotions in-check, suppressing and habouring these abilities at a minimal rate. This is all metered throughout the series, with Mob’s power tracked by the percentile. When he reaches 100%, he becomes uncontrollable, almost psychotic with his natural ability to obliterate any of his surroundings. Get it? Mob. Psycho. 100.

Mob work’s as an apprentice and understudy of Arataka Reigen, a self-proclaimed psychic and mentor, who in-turn is essentially, a con-artist scamming his clients’ into solving their supernatural problems, with his “amazing skill”. His business, “Spirits and Such”, operates on the basis that his clientele pay upfront for his services, only to be delivered and performed by Mob, in which Reigen disguises as his own abilities. While Reigen may pay Mob poorly, he does genuinely seem to care for Mob, and guides him to harness his powers, and only use them for good. Reigen carries out his overly-dramatic, fraudulent exorcisms, while convincing Mob that his powers exceeds any “Espers” and that even Mob himself, may need to be weary of his phony ability.

Initially, Mob Psycho 100’s first episode was a tough one to gauge. While trying to grasp the main plot-line, it was quite easy to understand the characters and their place within this universe. From the moment Reigen appeared on screen, I knew that we were dealing with a smooth talking con-man who was stealing people’s cash in-turn for false-forwarded favours that were ultimately being delivered by this young yet gullible introvert, who was simply scraping by in school, with no certain goals or aspirations. While the plot itself may not be at all unique, it’s presentation certainly melds itself well with it’s scattered story. The abstractness of it’s delivery presents itself a particular style that is rarely seen from many seasonal Anime. While we are treated to some amazing animation, and vibrant composition, Mob Psycho’s introductory paces itself quite dispersed. This does play in part of it’s all-round design, however. Yes, there were moments where I did question why certain plot-points were taking place, and how Mob even got tied up in this mess, but I knew that this was going to be part of the fun.

While the first episode boldly showed why the series has become a global phenomenon, I still sat and questioned how it was any different from the plot of One Punch Man. There were many similarities between Mob and Saitama, that certainly played out. A young, talented, yet complacent hero, with the supernatural ability to annihilate any threat with one blow. While I may be gullible myself in only judging this from one angle, and not experiencing the entire series just yet, the franchise was obviously designed to entice those dedicated to ONE’s most beloved franchise. However, Mob Psycho’s individual execution is perfect. For those who impatiently awaited the return of our red and yellow-beclad hero, Mob Psycho’s delivery of it’s action-comedy certainly delivers the same spirit as it’s predecessor, in it’s initiation. While much of this “review” has compared the ONE’s two franchises, it’s hard to differentiate how different they actually are with it’s similarities being so close.

In saying this, Mob Psycho’s animation is beautiful. It’s fluent, it’s vibrant, it’s overly flashy however (anyone who is sensitive to flashing lights or certain patterns may want to stay away from this one). While I can understand the appeal of gaining one’s attention with a vibrant, colourful display, it’s rapid colour changes during action scenes had me almost confused as to what was happening on-screen in moments. Saying this however, I am hooked. This series presents something that I have personally been seeking since the season finale of One Punch Man. Yes, we do have the second season available at our disposal, but Mob Psycho 100’s potential at displaying a uniqueness is certainly present, and one I am definitely keen to experience. 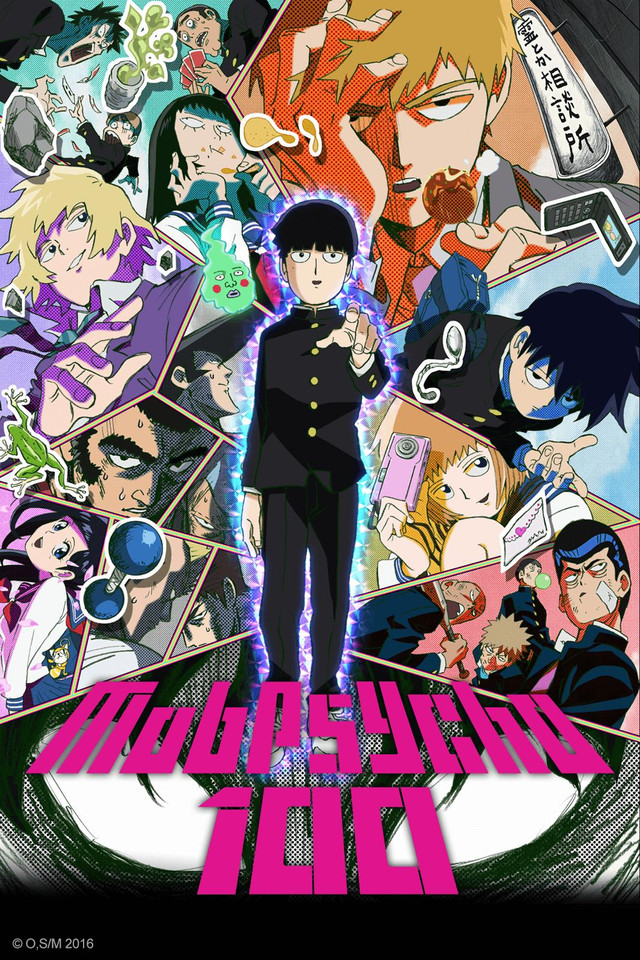 Mob is an 8th grader with powerful psychic abilities who wants to be normal. When not exorcising evil spirits he attempts to suppress his powers, causing stunted emotions. But when he hits 100 percent, his pent-up feelings unleash a dark power.

DASH Gamer Playlist #17 - The Comfort, Silverstein, I The Mighty, Hands like Houses & More