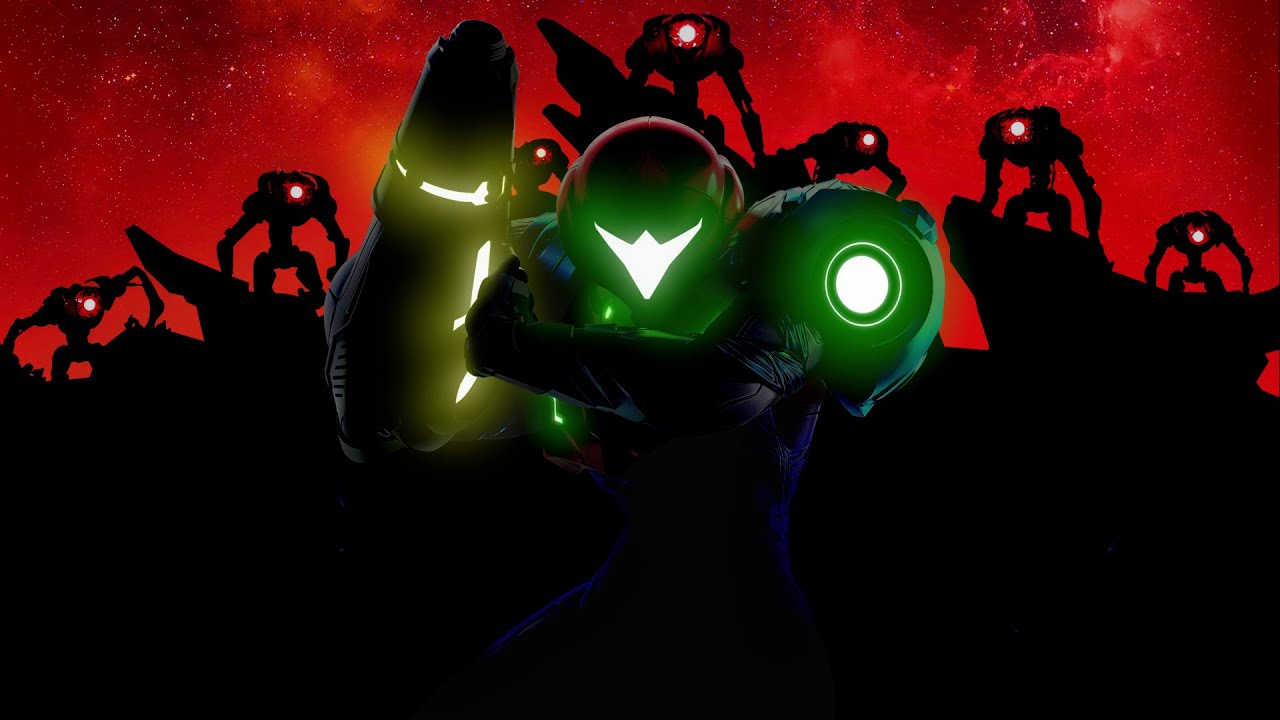 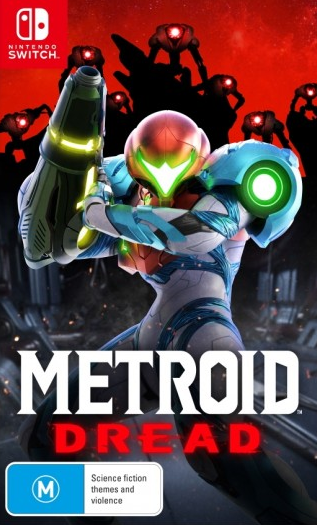 In one of our last Nintendo reviews for DashGamer – at least for a long while – Metroid Dread is one I’ve personally been waiting on for years. I’m talking since rumours began circulating of its existence on GameBoy Advance, GameCube, Wii and so on. From highschool to adulthood, it’s been one long tease after another, but finally we have it in our hands; The long lost chapter of Samus Aran’s adventures. Combine this with the gorgeously manufactured OLED screen of the new Nintendo Switch Model, and it’s an aesthetic dreamscape, but after completing the game, I was somewhat perturbed by its concentrated efforts in decisively placing nearly all of its presentation into the power of the OLED machine, rather than evenly spreading the love to mainstays of the docked persuasion.

I mean, yes it looks spectacular on Nintendo’s new revision hardware and does a remarkable job in demonstrating the new 7″ screens incredible, vibrant presentation, but at its core Metroid Dread, is filler for what fans are awaiting in Metroid Prime 4. Not that its all bad, nor is it boring by any stretch but I would apply the adage “simple, yet effective” towards the game. A certain does monotony tend to drive it towards its climax, however with what heft it maintains, Dread still entails a distinct trademark of old-school platforming mixed within a modernised and majestic theatrical exhibition. Of course when talking about its labyrinth style, the as named after its titular category the Metroidvania genre has become a gaming staple across multiple titles that have taken the unique formula and extrapolated and amalgamated it into others like the rogue-like, or first person shooter. So it’s quite interesting to go back to basics and reacquaint ourselves with the franchise that started it all.

For those that are unaware of the title’s plot, here’s a brief synopsis as Metroid Dread itself is not entirely plot heavy. After being notified of a notorious parasite known as X, infecting multiple species on planet ZDR, The Galactic Federation deploy Extraplanetary Multiform Mobile Identifiers (EMMI) in hopes of safely searching the isolated destination, but lose all contact with the bots. With no choice, they entrust intergalactic bounty hunter Samus Aran to investigate the planet, where upon arrival is immediately confronted by a Chozo warrior who strips the warrior’s suit of her renowned abilities. Instructed by ADAM, her ship’s AI, Samus must make her way up to the surface after being trapped and confined in an underground lair. Exploring the ruins, she’s confronted by an EMMI that has seemingly been reprogrammed to attack her. Making an escape, she’s able to find one of the planet’s own central units that redistribute the bounty hunter, one of her powers back.

The Omega blaster is powerful enough to destroy the brainwashed EMMI into submission, with Samus destroying the bot after it again tries to confront her. After another brief encounter with another EMMI, Samus is rescued by Quiet Robe, a Chozo who tells Samus that the Thoha tribe had captured all Metroids that had invaded the Planet SR388. Their intention was to quarantine the planet, but also destroy it to eradicate the thread of other Metroids and X, but Raven Break – the same Chozo that attacked Samus earlier – had intentions to use Metroids as bioweaponry. After slaughtering his people, the Mawkin ruler would spare Quiet Robe to control the Thoha DNA, only to find that surviving soldiers would be infected with X, thus a – say it with me now – Pandemic broke out; what a weird world to live in.

So let’s get the negative of Metroid Dread out of the way first and foremost. Metroid has never been one to boast a lofty narrative, its always been about action; or at least applying the saying ‘actions speak louder than words’. The plot is essentially told through a concoction of cinematics with minimal exposition told through the AI system ADAM. There are moments far and few between that have any dialogue, but is presented in a way that resembles Super Metroid for SNES. I will say that above its simplistic disclosure, it does a great job in keeping the player in the know of each emphatic arc that our space cadet ventures through. But there’s a lot of great that comes out of this proclaimed ‘final chapter’ in which Nintendo has touted.

Metroid Dread's tale on the Switch, given that its initial - and scrapped - intention was to be a Game Boy title. The impact this game alone will have on the franchise is of grandeur, that will remain unmatched for many years.

Dread personifies its visionary nuance in Metroidvania gameplay and structure. There are some shortcomings that do poke its weary head in every so often, such as lack of direction that can be argued with the title’s ginormous map, but the problems persist if you don’t have it in front of you all the time. You’re guaranteed to backtrack every so often, but getting lost in the scheme is all part of Metroid’s design. It’s not ideal in our current gaming climate as we usually apply the term ‘bottlenecking’ to that stance, but appreciating the inertia of Metroid Dread, easily washes away any tedious inducing tones that the campaign can suffer from. There is a reliance on dexterity given its ample usage of Samus’ expeditious manoeuvring and arsenal.

✔️Metroidvania perfection from its fathering series.

Wall jumping, climbing, sliding, frog leaping, and of course blasting your way across multiple rooms is all part of the fun, but can be a task when being intricate. Using the right analogue stick to aim her Arm Cannon, Samus can easily eradicate any small threat with a simple click of her trigger, but its further into the title that you begin to collect upgrades that allow you to take on larger creatures that demand power. Eight locations hold 23 unique upgrades to your suit, allowing trademark power-ups including the Screw Attack, the Morph Ball, Wave Beam, and my favourite the Power Bomb – because it sounds like the wrestling finisher.

Trudging through the planet ZDR, and exploring its depths, I was awestruck by its astounding beauty that would have been remissed if the title was not developed for the Nintendo Switch. However playing in docked mode on my large 4K TV, I noticed some imperfections that had be cringe a little. Given its basic exhibition, some detail would have been appreciated in fine tuning the resolution’s output. I understand that developers are limited to the hardware’s capabilities, but jagged models moving on a large monitor is like exposing a rush to market, low-budget title that’s simply masked behind the new revision’s handheld mode.

As someone who rarely uses his Switch in that form, pixel density is something I had serious concerns for heading into the Nintendo Switch’s life cycle, knowing the developer’s reputation for concealing this issue behind smaller screens; e.g. the Nintendo3DS to Nintendo3DSXL. With that said, it’s still a beautiful game. The mystique of it’s rocky ruins, the turbulent turbines that power energy sectors with great aesthetic which can only be described as artful, and the style, grace and fluidity that our protagonist moves. Its silky smooth presentation is a huge feat for Nintendo, as I found no issues within the title’s performance at all. From beginning to end, no frame dips, no bugs or glitches, but some of the cleanest platforming I’ve experienced this year.

Attributing to the exemplary works of in-house composer and mainstay to the franchise since Super Metroid, Kenji Yamamoto has orchestrated quite possibly the most heartfelt and eloquent compilation of music towards a Nintendo platformer in Metroid Dread. There are subtle callbacks made obvious from the onset, with the Super Metroid intro cinematic jingle, rearranged to fit a modernised presentation, but the dreary, dank and apropos dread that seeps into each sequence and scenery is sublime. The tension and hostility that overtakes you in an area from the contemporary to rapid tempo in both the Artaria’s (I & II) is an emotional leap, leaving you leaning forward with great concentration yet trepidation. Moments that make you sweat with urgency, I love it.

Metroid Dread is Nintendo’s love letter to the imposed finale of the longstanding Metroidvania genre. While other developers and publishers have gone on to revolutionise the category, flourishing with greater depth and everlasting demonstrations in quality of life, Nintendo will forever be noted for creating such an immersive series. Was it worth the wait? Yes. Unequivocally, a huge piece of history that had defined a generation of leaving devout fans waiting over a decade, to release a great game like this is totally worth the wait. I’m grateful to have experienced Metroid Dread’s tale on the Switch, given that its initial – and scrapped – intention was to be a Game Boy title. The impact this game alone will have on the franchise is of grandeur, that will remain unmatched for many years. Game of the Year worthy? Yes. Definitely.

0
Metroid Dread is an action-adventure game developed by MercurySteam and Nintendo EPD, released on October 8, 2021, for the Nintendo Switch. Players control Samus Aran as she investigates the source of a transmission on planet ZDR. 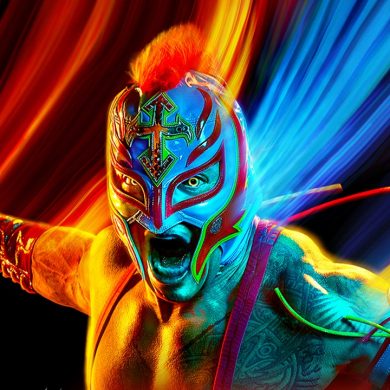