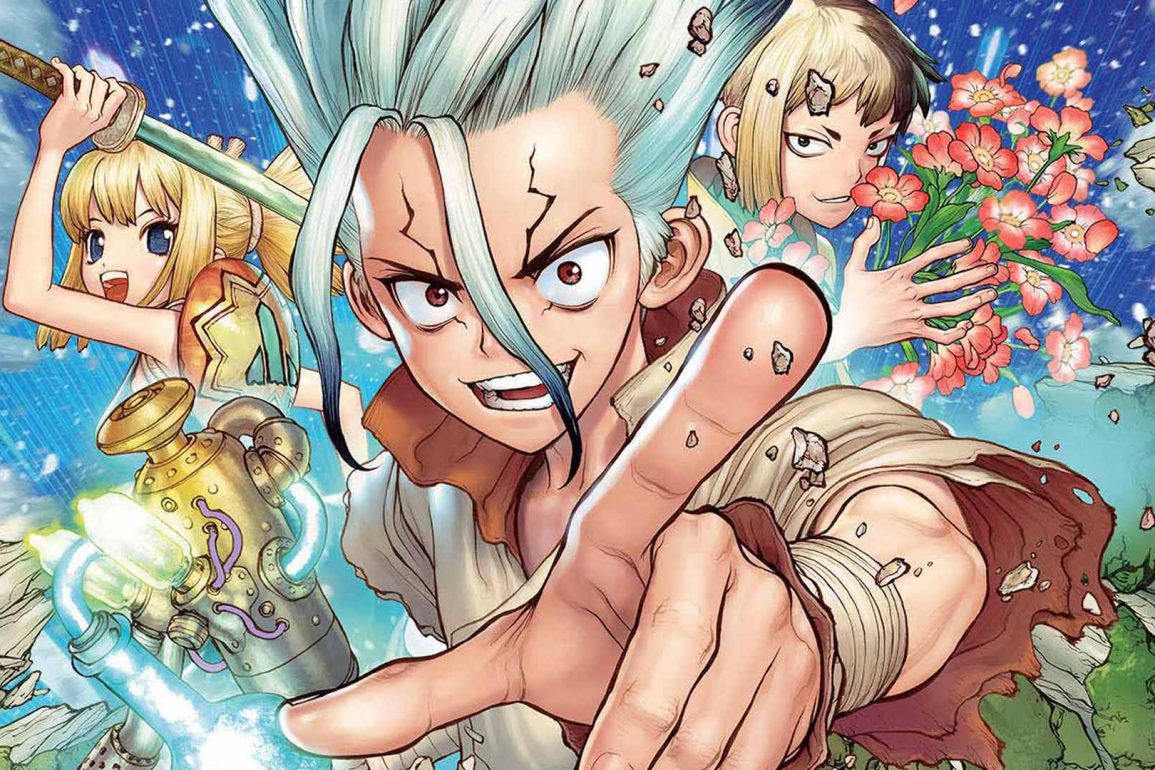 Season One, Part One 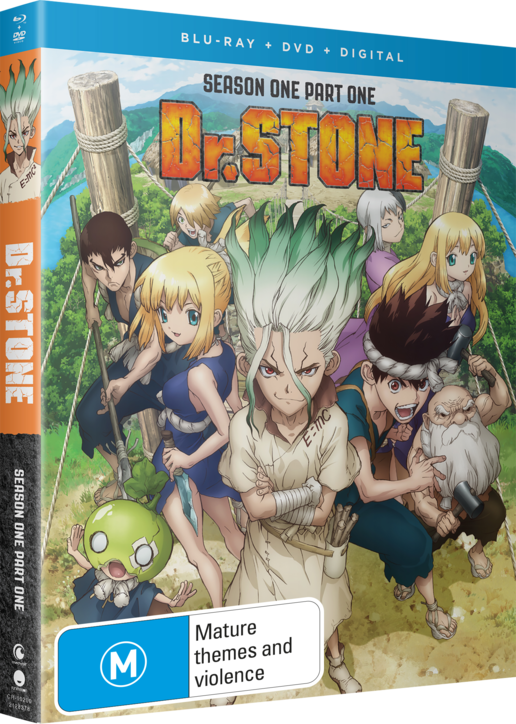 Science! It always drags me into the weird world of Anime. I will forever be a fan of the cliche’ Mad Scientist, that presents itself as the protagonist, or one of the main characters of any fantasy series (of course, massive Steins;Gate fan). With Dr. Stone, I honestly had no idea what I was prepared for. I had seen the manga sitting in a local book store a few times, but never thought anything of it until I saw the series pop-up on my “Recently Added” list on AnimeLab. The Anime has aired its entire first season in Japan, and is available in both sub and dub on the streaming service. However as we do here on Anime Analysis, we’re going to dive deep and dissect the first few episodes of the title before returning to them upon completion and giving our full fledged review of each show.

Dr. Stone is based on the Manga of the same name, with it’s first Volume published on March 6, 2017 with Jump Comics’ Weekly Shonen Jump Series, and is written by Riichiro Inagaki, and Illustrated by Boichi. It currently sits 13 Volumes and 97 chapters deep, so the Anime does not fall short of any source material here. The Anime adaption has been commissioned 24 episodes for it’s inaugural season, which is usually seen as double industry standard these days. Popularity wise, the series has garnered a mild buzz around the community, but has been highly praised for it’s interesting plot, it’s quirky cast of characters, and incredible animation. So let’s dive into the plot and  some of the noteworthy key points, I was able to attain watching the twelve episodes of Dr. Stone.

Dr. Stone Season One, Part One is now available on BluRay from Madman Entertainment, with Part Two expected to arrive in March 2021.

The first episode see’s us meet Taiju Oki, a high school student looking to finally confess his love to one of his best friends, Yuzuriha Ogawa. He confides in the series main character, Senku Ishigami a student-scientist, intellectual, and the renowned snarky know-it-all. While a proven scientist, Senku is known for his zany predictions that are marginally exaggerated and compounded by the number 10 (10 billion percent, 10 million recipes, 10 thousand uses for Nitric Acid; etc.). Taiju finally approaches Yuzuriha, who is tying a piece of cloth to a tree just outside in the school courtyard. Just as he approaches to confess his love to her, a green light or beam is seen taking over the atmosphere, petrifying and encapsulating the entire human race in stone. It is revealed over time, while statues remain intact, so do their body’s, and mind. All humans are able to think while frozen, which has Taiju continuously professing his love for Yuzuriha for centuries.

After a few millennia, Taiju breaks free from his inanimate state finding that there were some statues destroyed in earth movement, but finds Yuzuriha intact. This then leads to him finding out that Senku had survived and had been free for six months. Senku informs Taiju that the human race was facing extinction after 3700 Years of confinement within stone, but had plans to restore humanity. With Senku’s brains, and Taiju’s insane strength, the two get to work finding a cure to free Yuzuriha and other humans. Through meticulous experimentation, the two try to find the recipe that breaks humans free, but ultimately fail numerous times (or as Senku would say 10 billion times), that is until they finally find the magic elixir that breaks apart this preservative shell, Bat Guano and Wine.

Poised to revive humanity with this magic mixture, the pair set forth on saving Yuzuriha first not before they are confronted by a pack of lions. The duo collect the statue of the young girl and race back towards camp but are intersected by another swarm of both and male and female lions licking their chops, readying for a feast. Taiju sets Yuzuriha down, apologises to her and pours the elixir on Tsukasa Shishio, a notorious athlete he was known as The Strongest High School Primate, with his Tarzan like physique and androgynous overtones. Upon breaking free, Tsukasa obliterates the pack of ferocious felines, sending them back to where they came from. Tsukasa vows to protect both Senku and Taiju after setting him free and hopes to help the pair rebuild civilisation into the perfect world. That is until Senku begins to analyse the strongman’s resolve, doubting his allegiance.

The brotherhood shown between Senku and Taiju throughout the first two episodes of this series, resonates that almost of an Anime version of Pinky and the Brain, or the humour of a Kim Possible and Ron Stoppable. One’s the brain, the other is the brawn. Put them together, and you have a recipe for comedic success, while leading off the charm and light-heartedness of the series’ intent. There were moments that had me totally busting out laughing, but the sentimental moments tugged on my heart strings. I mean, imagine having to wait over 3700 years to someone you absolutely adore, that you love them, and have waited them for all that time. Man, I’m a hopeless romantic… Regardless, my first impressions from the opening moments left me as completely stunned as a statue (all the puns intended). The writing, acting and comedy timing are on-point, as well as the animation.

I was truly impressed from the moment the series started, with how colourful and vibrant the settings were, and how fluid the animation really is here. The character design reminded me of an old school style Anime, especially Yuzuhira’s design. It’s almost like you could lift her character and place her into a series like The Melancholy of Haruhi Suzumiya, and she would just blend in quite well. The incredible background renderings set and incredibly vibrant, but bleak tone for the series, depicting nothing but a wide open landscape with nothing but a field of shrubbery, and stone. The detail placed in close up shots of characters shown here are well detailed too, from the creases in Senku’s facial expressions, to the sharp shading of each shape shown on screen, this is on par with some of the best animation out right now, I could definitely compare it to a My Hero Academia.

The over-the-top performances delivered by each character within comedic scenarios are the icing on the cake, that is this post-cataclysmic, dystopian backwards future. The mere thought that humanity would be put on pause, and then recommence centuries into the future without the use of technology or resources is wild. It takes me back to the 2002 Simon Wells movie, The Time Machine, where Dr. Alexander Hartdegen finds himself in an unfortunate circumstance and travels to the year 635,427,810. Luckily for Senku, he was revived in 5738 and was able to scramble as many scraps from centuries prior to survive his six months in complete desolation. This has to be one of the most encroaching narratives applied to an anime series that I have come to appreciate in quite sometime. Highly, HIGHLY recommended. A must watch. 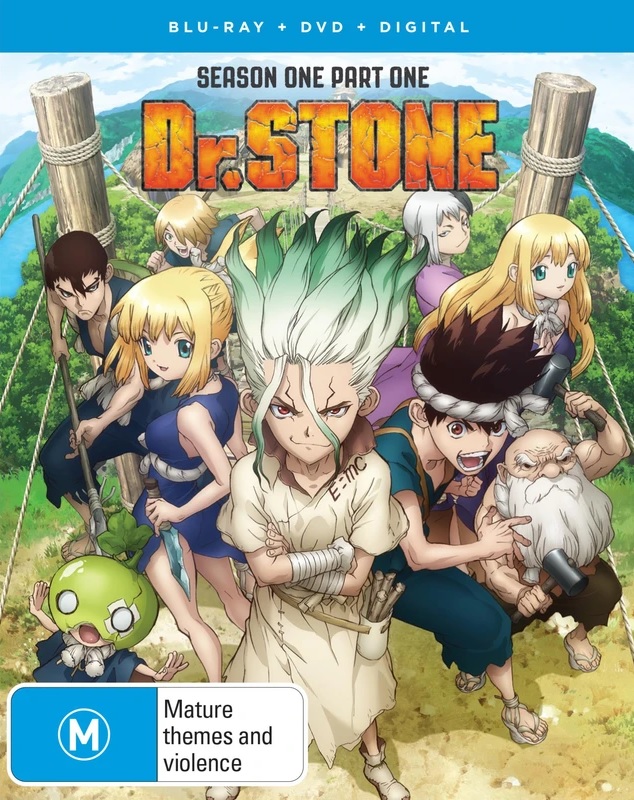 Several thousand years after a mysterious phenomenon that turns all of humanity to stone, the extraordinarily intelligent, science-driven boy, Senku Ishigami, awakens. Facing a world of stone and the total collapse of civilization, Senku makes up his mind to use science to rebuild the world. Starting with his super strong childhood friend Taiju Oki, who awakened at the same time, they will begin to rebuild civilization from nothing… Depicting two million years of scientific history from the Stone Age to present day, the unprecedented crafting adventure story is about to begin! 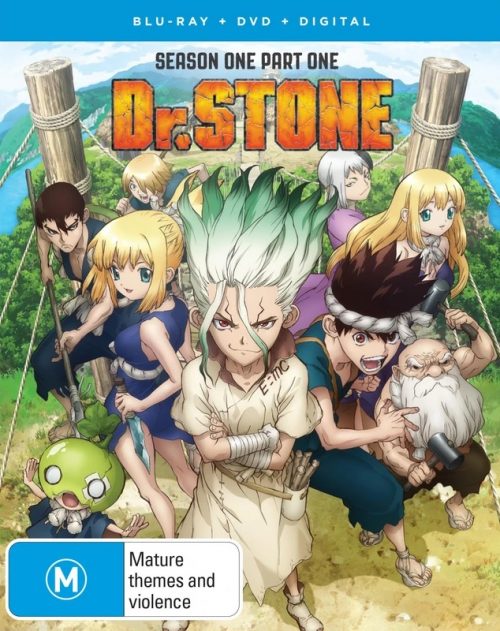