Incredible arcade-shooter inspired by a myriad of mediums

Doesn't take itself seriously, despite it's grim story

You know when you start a game, and you have that feeling that it just feels right at home on the console you’re playing it on? That’s exactly the feeling I got, playing Damsel on the Nintendo Switch. Once I got knees deep into this incredible platform-shooter, developed by Aussie Indie Games development team Screwtape Studios, I knew that I was going to be in for a wild ride. Damsel plays the double-entendre off excellently, with a fantastic story behind it’s strong, and bold female lead, with whom I’ve absolutely fallen in love with as a character, and the design behind her. Now I’m about to give my podcast co-host Buddy Watson, a run for his money here with some movie knowledge. Back in the late 70’s, there was an Australian horror flick known as Thirst, which was regarded as one of the biggest influences in some of the most notorious or reputable “Vampire Flicks”. Part of the plot for this movie see’s Dr. Gauss (played by Henry Silva) kidnap a descendant of Hungarian serial killer, Elizabeth Bathory to drink her blood, and gain superiority, to brainwash her into joining this Vampire led, cult. I studied this film back in high school, as our Media Studies teacher was huge into horror movies, which I never really was to be quite honest, but I see now that it actually came in handy for all things, a video game review. Thanks Mr. McLaverty. Still, the film was terrible, but this game mirror’s some of the brilliant themes that came from the flick, so whether it’s coincidence or not, I’ll never know.

Regardless, Damsel is an incredibly fun arcade platformer/shooter. It’s immersive, but isn’t narrative heavy which is great for anyone looking for a “not-so-serious” type of game, that you can sit back, and chill out with. The story is told through a series comic panels that will pop-up in between each mission that you are presented. The plot follows our titular heroine “Damsel”, who decides to investigate the suspicious beverage company known as “Red Mist”. The basis of the story is that Humans and Vampires are at peace with each other, but Red Mist looks to provoke this harmonious nature between the two species/races, but deviously kidnapping humans, to only steal and sell their blood, using it as their ultimate ingredient in their drink. You could also reference Blade: Trinity here, with the idea of using the human race as cattle to serve it’s evil corporation. Now Damsel in no way, a horror game. The game does a great job keeping itself humorous, and light hearted. If anything, the story of the game is in no way the meat and bones here, it acts as a catalyst to engage and motivate you to progress, but in no way does it overbear the game’s gameplay.

Jumping into Damsel‘s first mission is a quick and smooth transition. While it may be perceived to some as basic, the game fits the mold of an action-arcade platformer perfectly with it’s old school feel. While some of the mechanics will take some time to adjust to, you will eventually get the hang of controlling Damsel, and once you get the hang of the game, you definitely will never want to put it down. Equipped with a futuristic sawn-off shotgun, Damsel blasts her way through her oncoming villainous blood-sucking vampires, stopping them from anymore threats towards the human race. Damsel’s upgrade system doesn’t focus on weaponry, rather skill-sets which are presented throughout the adventure. Dashing into Vampires are just as satisfying as blasting them into the unknown, as well as dashing through the air, double jumping and wall hopping, ultimately turning the adventure, into a hidden spy-hunter themed platformer.

Level design is awesome here. There are 3 main chapters presented with over 70+ levels to play. While missions are short here, the chapters are seen as your main progression, but the game rings true to titles of similar nature like DASHGAMER.com’s 2018 Game of the Year, Celeste. The difficulty spikes throughout the adventure are quite evident at moments, where you will need several attempts here to complete levels. While there are plenty of oncoming enemies to tackle along your path, that won’t be your main problem here. What I personally found difficult at times were level objectives. There will be times where you will have to play a woman of many hats here, and try to essentially designate your assigned tasks down to their importance, until you get it right. The game tests your conscience at moments with timed missions that will ultimately test your patience, but will also present moments of utter distress (oh boy, yes I did that) with hostages that are need of saving here. You can totally dodge the hostages, and progress with your game without saving them, but will you?

The presentation of the title, is utter beauty. I love the Saturday Morning Cartoon vibe the title presents, so you know that you’re essentially stepping into a world that is a caricature of a dark and gritty city that’s in peril, in need of saving while ultimately delivering a bright, vibrant, and generously detailed design. I loved scaling different parts of the level layout, whether it was crumbling buildings, pillars and posts, or running through various parts of back-alley ways, and factory settings, the game’s great visual style appeals perfectly for old school gamers, like myself. Enemy design in the game, while limited at times, will still present their own unique points of attack, that will in-turn test your skill and patience.

Now with all that said, the weakest part of the game I found was it’s limited soundtrack. While part of me feels like I should not pass judgement on this at all, I did find myself muting the game and listening to Spotify in the background due to the game having such a limited choice of background music to enjoy while playing each level. While going in fresh for the first couple of hours, I did not mind it at all. However after 3 hours of the same background music, I had to switch it over to something my music library. Despite this, I did enjoy the music presented in the game, as it fit the mold perfectly, but due to it’s repetitive nature, I did have to make the leap over to some lo-fi hip hop chill beats to game to. That said, the sound effects to the game were great. It fit well with Damsel’s satirised nature.

If you’re looking to jump into something that’s a great time to chill out with, Damsel is a fantastic choice. It’s not story heavy, but presents something that is tight, not complicated, and fun to play. It’s satirical nature, along with it’s animated design add to is it’s unique charm and flair. Being a fan of Celeste, and Dead Cells made this title an easy one for me to fall in love with. I was real proud to present Screwtape Studios with the DASHGAMER.com Community Voted, Indie Scene Award, last year. The game lives up to this award, as one of the best independent developed games I’ve played, and so near and dear to my heart that it is from our homeland of Australia. It serves itself well as a casual title that appeals to a niche crowd that absolutely have no love lost for their platformers. Damsel is an intense experience, that will leave hardcore devotee’s for their love of platform shooters, coming back to this title for years to come. 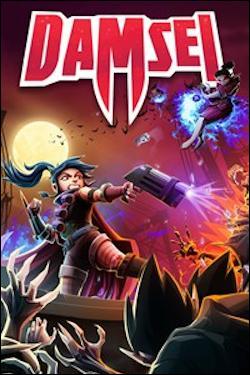