The game is gorgeous. Absolutely stunning.

Some cumbersome moments that leave areas feeling empty or shallow

Damn, is this game gorgeous. Never experiencing the Trine series beforehand I was going into this title completely blind from any prior experience in the franchise. It had all been hearsay to me, on how impactful it is to play a Trine title. As a huge fan of platfomers/side-scroller genre, I had always kept an eye on the series but never followed through on actually playing a title. But I must say, this is certainly one of the best platformers, I’ve ever had the joy of experiencing. While I must admit, there are many other titles within the category that have mastered it’s craft, Trine presents a unique display of puzzle-type platforming, that measures itself without any oversaturation between the hybrid genre. It takes the perfect amount puzzle, the perfect amount of platformer, splashes a colourful display of intense beauty on screen, and adds a charming cast to boot. I can definitely say that I fell in love with this game, from the moments it began, and I feel ignorant for letting this franchise fly underneath my radar for quite sometime. With a plethora of platforming choice that currently spoils us throughout the gaming market currently, why would I recommend Trine 4 over the rest? It’s simple… It’s different, it’s unique, it’s charming, and it’s incredibly fun.

Our story begins with Wizard Amadeus, Ser Pontius the Knight, and Zora the Thief, three established characters from the franchise reassemble to find a prince who is currently suffering from night terrors that come to life. The Prince escapes from an academy, where he had been studied due to his gifted nature of spawning these mystical creatures from him mind, leading him to find refuge within a giant mystical forest, allowing him to test his new-found powers with freedom, only for these vivid nightmares to run rampant amongst the world. It is now up to our three protagonists to hunt down the Prince, and save not only the universe, but himself from these dangerous inhabitants. I will say, while the story may be simple, it definitely does not lack any depth. It’s a wonderfully thought out plotline, which resonates a Disney setting, with an intriguing cast of magical characters.

It’s one of the most charming, and genuinely enjoyable plots I have witnessed in a platformer. The setting certainly helps the magic shine within the title, bringing forth much mystique and flair throughout it’s gameplay, which is something you rarely find within the platforming genre. There are certainly franchises that have crammed quality right into their creativity, back lack certain direction. With Trine 4 however, everything delivers a certain layer polish, not only in it’s incredible presentation, but puzzle solving. Much of the characters dialogue can be attributed to basic banter that bottlenecks certain parts of your quest, but cloak it with some effective comedy that will have you chuckle in subtle moments. The title’s basic structure let’s you experience what is undeniably an incredible little-big quest that demonstrates a folk-lore like presence within it’s amazing atmosphere.

Trine 4’s puzzle system consists of a combination of multiple capabilities that each of your characters traits will not only feature, but garner along the way. However, there are different types of puzzles that will also test your pure dexterity and timing. It all relies within your skillset to control each characters attribute concisely. While you may come across simple puzzles that lead to timely progression throughout the campaign, you will encounter difficulty spikes within some, that almost act as a “checkpoint” of sorts. You may skip certain puzzles if they are beyond your comprehension, by simply using shortcuts in vantage points of progression, just note that doing so will only worsen your skill set, and will likely lessen your appreciation for the complete experience of the title. The title’s combat system, leaves much to be desired. While each character may have their own unique style of attack, it certainly does lack multiple maneuvers or machination for each characters design. However, it certainly does get the job done.

While you may level, and upgrade multiple sets of skills, your general sets of abilities remain completely the same, just more power within each attack. This in whole, is completely understandable. While I would have appreciated a little more depth here, it’s a puzzle platformer, not a full-blown RPG. It’s completely different experience that borrows elements from other genres to fill some gaps and present a quality push which I can certainly respect. As mentioned prior, the game is absolutely stunning. Witnessing the forest from the onset is something I deem completely mesmerising, and certainly memorable. I would compare it’s description to Ori and the Blind Forest, with calming hues of blue and purple, with lush and gorgeous greenery, that works with it’s wonderful use of light particles across the screen. Moments of despair play in part of the on-screen rush of climbing through certain parts of a desolate and deserted world, with wonderful lighting and shadowing through broken and bleak castles and the incredible nightlife of a city town.

On-screen animation, and character design are certainly of some quality. While we may not be comparing this to anything of Triple-A status, there is certainly love and passion put into each member of this charming ensemble on screen. There is a certain motivation presented within each characters quirk, which is spotlighted through each cutscene shown in between moments of gameplay. While model design may lack detail, it definitely presents heart, which is something that can be perfectly placed within this imaginative world of fairy-tale. The soundtrack is composed and edited by Finnish musician, and sound designer Ari Pulkkinen (Resogun, Super Stardust HD), which sets a contemporary environment, and sets the tone quite well for each setting experienced, and attributes to character dialogue moments that meld perfectly with every glimmering significance of on-screen presentation.

Trine 4 does is incredible, and should not be missed for anyone who loves a great platfomer, or puzzle quest. A unique blend of genre’s, coming together to bring something mysteriously magical right from the onset, was honestly something I did not expect to experience. While there may have been some apprehension to jump right into the fourth entry of the franchise, rather than experience it in a whole, I certainly am glad I have been introduced to such a wonderful series in this way. It definitely motivates me to possibly visit it’s prequels and certainly makes me want to replay this title sometime in the near future. The combination of on-screen beauty, intuitive puzzle design, great gameplay and charming characters makes Trine 4, one of the best platformer-puzzle title’s I have personally played. Trine 4, is not to be whimsically missed, and deserves every bit of your attention and will be remembered as a platforming pleasure that will gratify anyone looking for a completely casual experience. 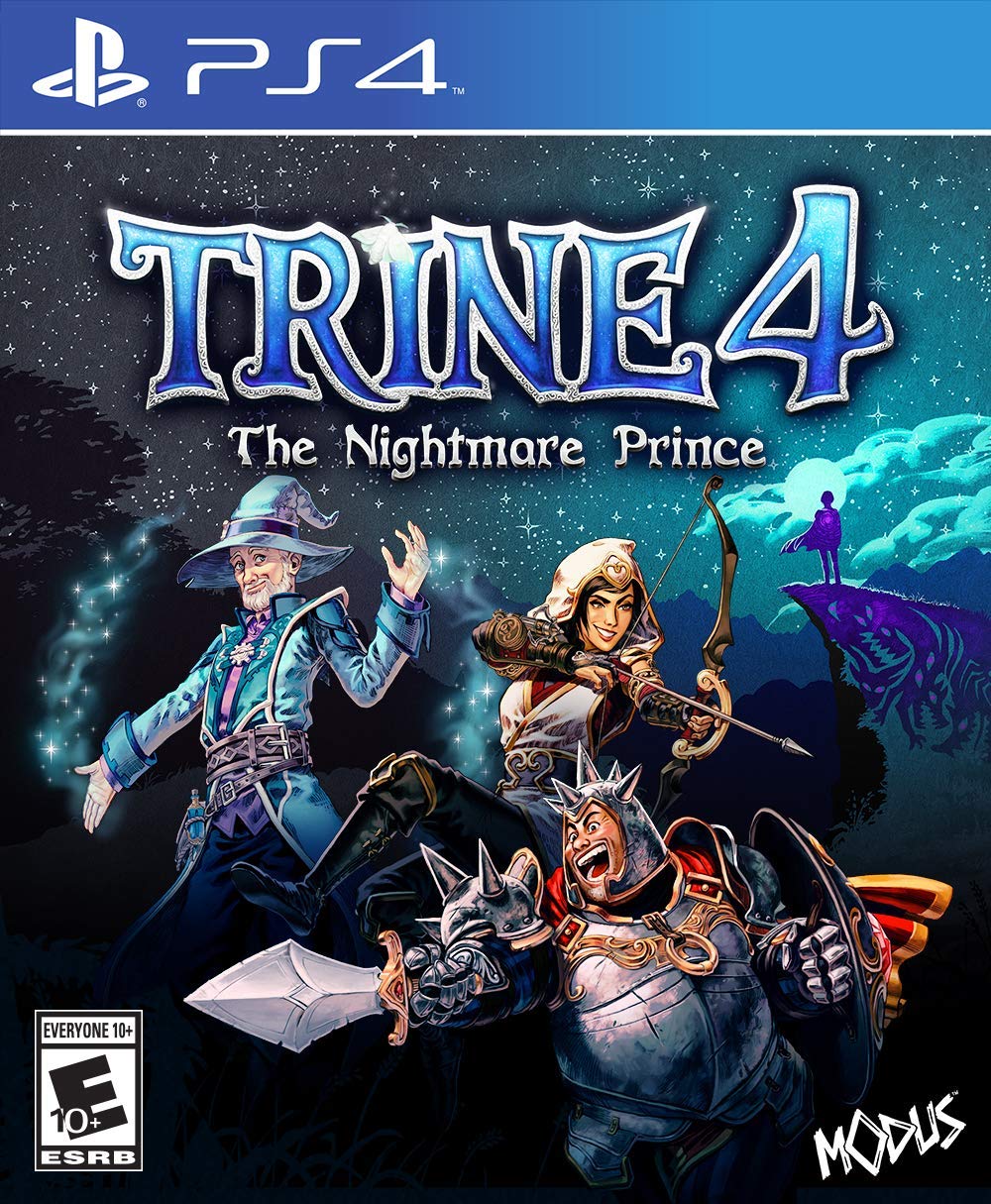 Trine 4: The Nightmare Prince is a 2019 video game for Microsoft Windows, PlayStation 4, Xbox One, and Nintendo Switch. It is the fourth installment of Trine series and features a return of the series’ three protagonists and medieval fantasy location.