Gooigi is the best friend, you totally forget you have.

Luigi’s Mansion is a franchise I will forever adore. It’s rudimentary tones or subtitles have made an astounding effect within the gaming industry, and is one of the most widely respected franchises with only three entries in it’s series. Nintendo hit it out of the ballpark with the initial entry’s charm and wit back in 2002, only to leave what would become a cult hit in it’s lonesome for over a decade. For many years, the historic Japanese development studio would have fans salivating, wanting more from what would be the Nintendo Gamecube’s testing bed, only to have the “Big N” bust out the big guns and re-invent the series, allowing it’s next entry to land on it’s last generation handheld the Nintendo3DS. While the reception may have been mixed towards their platform of choice, fans were certainly pleased with Luigi’s Mansion: Dark Moon’s evolution. The title presented a bolder, innovative and fresher experience, only to deliver what would be, a pleasant surprise. Luigi’s Mansion: Dark Moon left it’s mark upon many action-adventure puzzler’s, and allowed it’s inspiration to influence it’s latest entry with Luigi’s Mansion 3, on the Nintendo Switch. Nintendo definitely felt that they had something to prove within the franchise and has certainly left it’s impression with one of the most charming title’s of 2019.

The story begins with an odd invitation being delivered to Mario, Luigi, his pet pooch Polterpup, Peach, and the Toadstool family. The lot set out to vacation at a luxurious hotel placed in solitude and desolation from anywhere inhabitant. It’s almost the perfect setting for a trap, right? After arriving to the hotel, the group are welcomed by ominous staff all donning weird masks that exude the fact that these aren’t your regular bell-boys. After checking in, we are greeted by hotel owner Helen Gravely, who welcomes us to her hotel resort, and promises us that it will be an experience we won’t forget. The group are given a hotel room each to stay in, with Luigi and Polterpup sharing a room furthest down the corridor. With everyone settled in for the night, Luigi breaks open a book to relax, only to instantly fall asleep with his pup resting on his lap. Luigi awakens during the night, only to find the Hotel slowly transforming into a haunted mansion. This is the onset of what would become many moments of disbelief presented. The entire mansion was transforming in real time while exploring it’s hallways and empty rooms, trying to find Mario and crew, only to find his brother and everyone else missing. He discovers that the lovely Hotel had in fact been a farce covered up by it’s owner, to lure the crew in and deliver them to her master, King Boo.

King Boo had trapped all members of the Mario family, frozen and framed in colourless paintings, only to leave the best for last. Vengeful, King Boo chases Luigi down the hallway, only for Luigi to escape down the laundry chute, and land in the Mansion’s basement avoiding his impending doom. This is where the fun begins. Exploring the basement, Luigi discovers a broken down vehicle with Polterpup helping him identify a hidden objects within it’s trunk. Exploring the car, they find a familiar tool in a new variation, the Poltergust G-00. Luigi quickly equips the ghoul busting appliance, and sets forth into the hotel in hopes of finding his brother, and friends. Making his way through the lobby, following his ghost dog, Luigi discovers that Professor E. Gadd had also been captured and framed in the ballroom. After encountering multiple ghosts amongst many haunted rooms, Luigi discovers a dark bulb in a safe, which allows him to reverse the framing effect, freeing E. Gadd from the frame. The trio hastly head back to the car garage, where E. Gadd sets up a portable laboratory, to monitor the haunted mansion and allow Luigi a safe haven to vault his collected ghosts while traversing through the multiplex, and allowing E. Gadd to make multiple additions to the Poltergust G-00.

Exploring the mansion, you will be presented with a unique variety of design throughout each floor. While “gimmicks” may be in place for each theme, it’s indicative representation sets it’s incredible design in motion, with a plethora of ghastly ghouls that will pursue you throughout your time in each dorm. With enemies of different size comes exclusive attributes and individual attacks that will test your skill set, and see how much you have learned. While most enemies will be a basic attack, with a flash of your torch attachment, and the general cleaning, mashing the “A” button is certainly satisfying, essentially body slamming them until their health meter depletes. While larger enemies will be tougher to simply defeat, you will need to be a little more strategic in the way you grip them. Each enemy encountered will come with a hilarious quirk that while their attribute may seem repetitive, their characterisation for each setting will be quite different from the last. The hotel is littered with interactables that seemingly make for some hilarious moments that will indeed have you wanting to clean the hallways for hours on end, but will also lead to incredible discovery with interesting secrets that lie behind doors, grates, and walls that could be cloaked with sheets, to mislead you. Trust me, I was fooled plenty of times. Make sure to be vigilant when vacuuming each area.

Also, remember your friend Gooigi. He is certainly your partner in crime throughout the game. There were moments I found myself scratching my head for minutes on end, trying to figure out some of the most extensive puzzle pieces ever presented in gaming, yet I kept forgetting about my gooey acquaintance. Pressing down on the left analogue stick releases Gooigi, and leaves Luigi in a solitary mindset, almost a daze. Pressing down on the stick again, reverses the effect and leaves Gooigi in a trance while controlling Luigi. There will be moments where both Luigi and Gooigi will be of use while holding down on the ZR button will have your playable character sucking air, then having your counterpart be in complete control of the situation. It’s an incredible mechanic that had be over joyous at how unique it truly was. Using Gooigi to access areas that are gated off by bars, or seeping through shower drains, or slipping through pipes to discover hidden items, only let’s the player dive deeper into every single crevice, and discover the bountiful scale of the mansion itself. The Mansion is spread over 15 floors with unique themes for each level. While some are the norm for holiday resort, other floors are just questionably weird, but that’s what makes it fun. Have you ever experienced a fixed Hollywood set inside a hotel? or a layered pyramid? Where is all the room for this stuff coming from? The title really let’s your imagination run wild, and it’s creativity set’s no bounds to how remarkable it really is designed.

The title’s presentation is absolutely flawless. From each character model on-screen, there certainly was heart etched into every single cast member, from the cosmetics to their lovable personality. The title rings true to it’s one keyword that really has defined the franchise; charm. Every surprising mechanic that awaited me throughout each floor had me stunned. I was in hysterics when I was able to ascertain the ability to chop through furniture with a drop-saw attached to the Poltergust, or even exposing ghost orbs that would live inside trash cans, that would come to life and attack me. Body slamming enemy’s will forever be something I take with a certain measure of gratification from this title. Just the sheer impact of being able to destroy collectibles around me made for some of the best comedy in gaming. It’s a carefree environment when your life is on the line, and Luigi couldn’t have cared less for the dollar value of anything around him, he was just trying to find his brother and friends, get the hell out of that place. By the way, the jump scares in this title; while I personally think that they are wildly tame, I’m definitely an anxiety ridden “scaredy-cat” and did find myself hop out of my chair a few times, only to chuckle. Fantastic. Oh, and yes… Luigi does hum to the Mansion’s theme. It’s the subtle callbacks that just make this franchise so damn good.

If I could emphasise anything from my experience of playing Luigi’s Mansion 3, it would be the absolute joy it bought me. No joke, I subconsciously caught myself on occasion grinning from ear to ear, without knowing. The title is just incredibly fun to experience. While controlling our horrified hero, Luigi’s lack of self-confidence projects his charisma quite honestly, only to have the disposition of his emotional balance be shifted by utter determination. It’s what makes him relatable, with his compassion towards everything around him, Luigi’s push-over attitude only lands him in complete strife every time. This is all underlined by an amazing cinematic display, not only by incredibly directed cutscenes arranged throughout the title, but by moments of utter hilarity placed within the gameplay loop. Luigi lands himself in dire situations that he could only hope an exit strategy is right around the corner in this vivaciously stunning hotel, turned haunted. It’s alluring how refined the intricacies are, in terms of the title’s attention to detail and how brilliantly it is all displayed. I was assured how incredible the game would be from the moment I stepped through those hotel doors, right from the introduction of what would seemingly be our antagonist, and ironically establishing our enemy’s with subtle comedic timing. It’s just sheer quality, that you would come to expect from Nintendo.

Luigi’s Mansion 3 is the best first party Nintendo title this year. Hand down, no doubts about it. Yes, the franchise is a cult classic but one no gamer should ever miss. It’s latest entry does everything right, and complements itself with it’s immaculate design. It’s dastardly wacky premise ultimately sells it’s initial quirk for what is unimaginably, a creative marvel. It’s one of the best action-adventure puzzle titles ever made, and one to be remembered for years to come. While it may not be completely unique in premise, and may be simple in gameplay, it’s accessibility will have only have millions of fans worldwide raving about it’s bold presentation, and quality delivery. I for one cannot wait to take my next vacation back to the mansion, and dive deep into every nook-and-cranny, to the title’s absolute completion. It certainly is one that deserves the time, just as much time and effort as Nintendo have put into making this title, and serving it to it’s fans like five star, hotel room service should. Luigi’s Mansion 3 is one of the best video game experiences of 2019, and should undoubtedly be in the same conversation for Game of the Year. 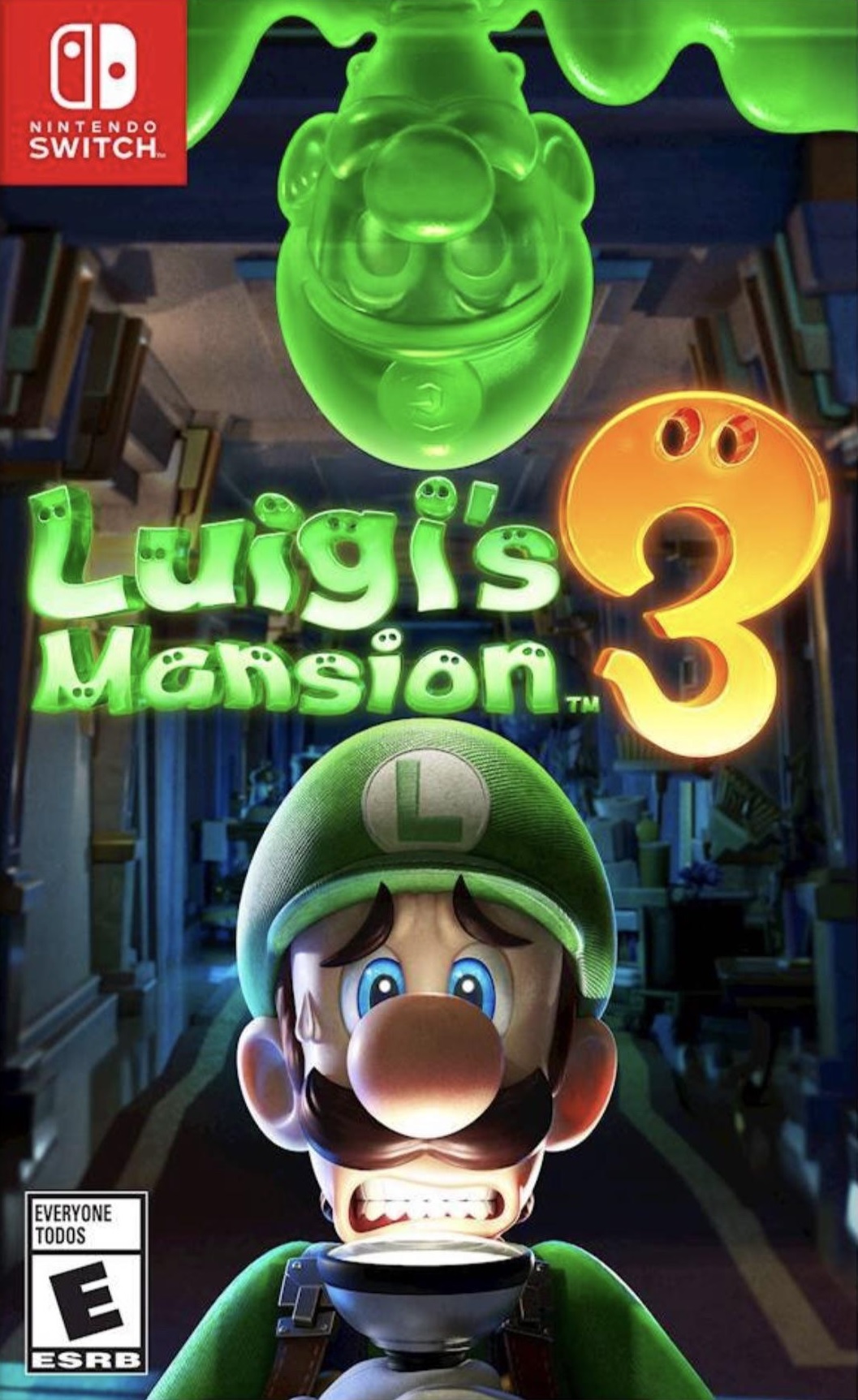 Luigi’s Mansion 3 is an action-adventure game developed by Next Level Games and published by Nintendo for the Nintendo Switch. It is the sequel to Luigi’s Mansion: Dark Moon and the third installment in the Luigi’s Mansion series, and was released worldwide on October 31, 2019.

Take My Tone #38 – SIENNA SKIES vs THE DISAPPOINTED