So, this falls outside of the usual Anime I watch these days. I’m usually one for a Drama-Comedy series that entails a protagonist with their trusty female, or male sidekick. But I honestly have not watched an Action Anime since Sword Art Online, maybe? And even then that series toes the line of Drama-Comedy, so it would be hard to completely place it under one genre. Whereas experiencing Fire Force, I was prepared to sit down and watch something completely different. While My Hero Academia seems to be the big Action series that Anime fans around the world are completely enveloped with right now, Fire Force is creating a similar buzz right now that mirror’s the reaction that “My Hero” had in it’s infancy. So it definitely is no surprise here, that I had to check this one out.

Fire Force (En’en no Shōbōtai) was first published on September 23, 2015 in the Weekly Shonen Magazine, where most Manga begins their serialisation before been published as individual chapters. The first individual volume was released on February 17. 2016 and has garnered worldwide acclaim for it’s plot and unique quirks given to each character. The Manga currently sits at 18 Volumes, with creator of the series Atsushi Okubo, stating that he plans on ending the Manga at Volume 30. The Anime Adaption was acquired by David Production, and Licensed by Funimation. The series has been commissioned a lengthy 24 episode season, much like Dr. Stone, double the industry standard run. Due to the series success, there is already talk of a 2nd Season being commissioned. The Anime series premiered on July 5, 2019 and has a “Simuldub” available on AnimeLab, with seven episodes currently on-demand.

We begin with the series protagonist Shinra Kusakabe, a third generation pyrokinetic who has a garnered himself a public reputation of being a “Devil”  from an unfortunate incident that occurred in his youth. He enlists in the Special Fire Force Company 8, a brigade of unique individuals with talents to help extinguish, and purify the souls of Infernals, humans that have been afflicted with a strange condition causing them to combust at any moment, and engulf entirely into a demonic fiery state. There is barely any knowledge of who may be behind the mass hysteria or why this strange phenomenon is causing such an epidemic across the globe, but the end result always pertains to Spontaneous Human Combustion. It is up to the Special Fire Force and their units to find out how to stop it from continuing.

The first episode emanates from the Special Fire Cathedral, where we meet our cast of characters in the Force, each carrying their own varying tropes of personality. Captain Akitau Obi leads with a relaxed approach, but strong leadership skills bring out his fearlessness. Lieutenant Takehisa Hinawa, a stern and intimidating character who shows the leadership qualities that the Captain lacks in moments. Sister Iris, a young Nun, who is shy, caring, and kind-hearted, but is unfazed and fearless when confronted by Infernals. Sister helps carry out a purification ritual in prayer to those whose souls may be lost when engulfed by their demonic state. Private Maki Oze, is ex-military and bodes a strong and stern personality. She shows a courteous side Shinra and Sister Iris, but is also revealed to be a hopeless romantic.

The first episode see’s the brigade dispatched to a local factory to deal with the owner’s wife who had just “turned Infernal”. During the episode, we see sudden flashbacks where the incident with Shinra’s mother takes place. It is insinuated here that Shinra’s mother had turned Infernal, and burned down their family home, along with Shinra’s younger brother. While the insinuation was there, Shinra ultimately took the blame from town members, and relatives claiming that he was a “Devil”. With the help of his teammates, Shinra was able to move past these flashbacks, and take down the engulfed Infernal, using his signature move, the “Devil’s Footprint”. It is revealed, the way to take down an Infernal, is at “the core”, which in turn is where the human heart is placed.

So, I’ll begin by saying that the animation here is absolutely stunning. Some of the best in an Anime Television Series. Easily some of the best seen in Japanese Animation. It resonates comparably with the silky smooth animation seen in Yuri On Ice, and action sequences seen in My Hero Academia. It’s vibrant and colourful tones definitely offset it’s dark nature in plot. Quite the juxtaposition, that I surely appreciate in an artistic approach. I absolutely love the character and uniform design here, taking the classic fire fighter threads and turning it into a distinguishable costume for our larger than life superhero-like fire force. There is a clear attention to detail, from beautifully rendered backdrops, right to the crevacious exterior shown in our hero’s. Definitely a sight to behold for those in love with top-tier animation. I loved getting to know each one of our hero’s and their story. A band of supernatural beings known as pyrokinetic’s that live out of a cathedral, that has been modified to be a fire station, delivering the Anime equivalent of 21 Jump Street.

I can definitely say that I had an interest in Maki Oze, as I found her character to be relatable to female protagonists seen in ecchi style, comedy Anime. Her personality differentiates what the series represents, which helps in some volatile moments. With that said, I dearly appreciate the approach of having characters whose personalities are entirely different from one another, bonding as a team for one common goal. I can see the Captain taking on the fatherly figure here, rather than the stereotypical hard ass, whereas that role has been assumed by Hinawa. I absolutely love Shinra’s distressed quirk, where he involuntarily smiles in dire situations. This has led to him being misunderstood by everyone, thinking that he enjoys being a labeled masochist. The inaugural episode bodes well for the series if they continue to deliver the same quality throughout the entire 24 episode run. 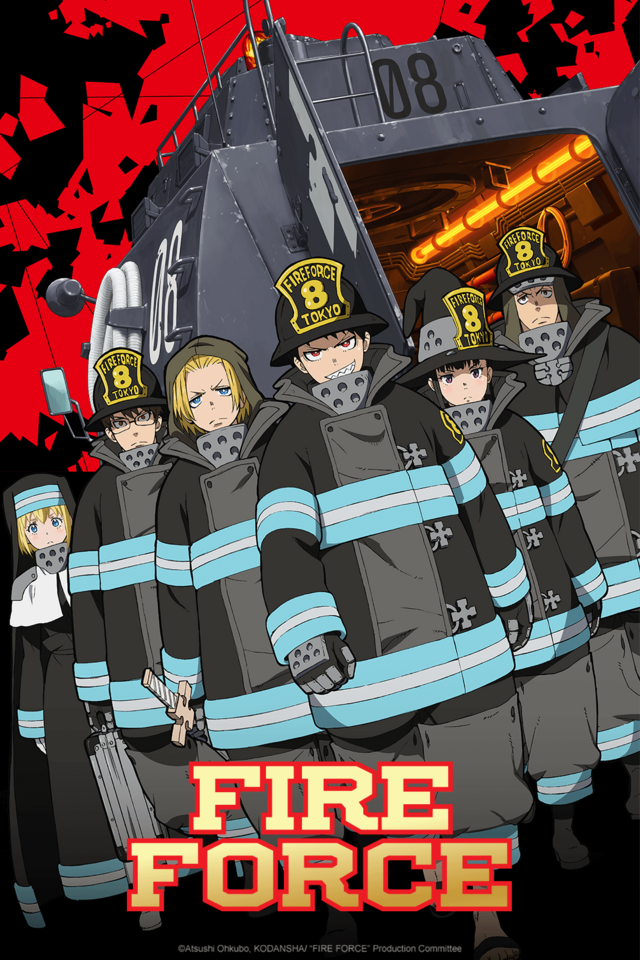 Terror has paralyzed the clockwork metropolis of Tokyo! Possessed by demons, people have begun to burst into flame, leading to the establishment of a special firefighting team: the Fire Force, ready to roll on a moment’s notice to fight spontaneous combustion anywhere it might break out. The team is about to get a very unique addition: Shinra, a boy who possesses the unique power to run at the speed of a rocket, leaving behind the famous “devil’s footprints” (and destroying his shoes in the process). Can the Fire Force discover the source of this strange phenomenon and put a stop to it? Or will the city burn to ashes first?