Castlevania’s lore has always fascinated me since I was a child. Unfortunately, it’s gameplay was less than to be desired in it’s first iteration. While it innovated platforming in ways we see used in modern hack and slashers today, it was considered niche and had more of a cult following regardless of its name-sake’s popularity. Castlevania’s legendary status amongst the gaming community is without question, however it’s backstory remained a mystery to gamers until further iterations of the franchise made its way to the PlayStation; most notably with Castlevania: Symphony of the Night. While die-hard’s of the series would have been familiar with the entire plot, this was truly the casual’s introduction into what would become one of the most significant entries into the Castlevania anthology. So with much intrigue towards the plotline, I was delighted when an anime adaption of the early titles was in production and making its way to Netflix. Stuck in development hell, Castlevania had been intended to be released as a feature length film.

In 2012, Adi Shankar was approached to direct a live-action version of the film, in which he turned down due to his ongoing commitments with Dredd at the time. Shankar noted that he had no interest in pursuing the project later down the line, once again leaving the project shelved for another 3 years. It was not until late 2015 that the script once again surfaced, and Shankar was again tapped to lead the project as an animated feature length film, and was pitched to Fred Seibert of Frederator Studios, who made the initial pitch to Netflix in which they were given the green light to a four episode run. Castlevania: The Animated Series premiered on Netflix July 7, 2017 to critical acclaim from anime fans, and fans of the franchise alike. The first series was the most popular digital series in the US during July 6-19, 2017 garnering over 23 million “demand impressions” on average. It was only days before the series was renewed for a second season. Since then, Castlevania has become the most successful animated original on Netflix, garnering a near 50 million impressions. The entire series is available right now, on demand.

With Dracula defeated, Season 3 enters a new arc into the Castlevania lore with Alucard adjusting to a new life of complete isolation. The prodigy of the great vampire lord now see’s himself living a serene life, harvesting and hunting food while only engaging with two handmade dolls of Sypha and Belmont. These are telling signs that the once vampire prince, is in a state of purgatory which is more or less taking a toll on his mental health. Meanwhile, Sypha and Belmont are traversing towards the town of Lindenfeld, but are suddenly ambushed by a hoard in which they defeat with great ease; almost baiting the beasts into a brawl. Sypha overestimates the demons strength in which she obliterates one, and sets one alight which turns nasty and almost sets the entire surrounding forest on fire. Belmont meanwhile thwarts a werewolf with his legendary Vampire Killer. Sypha quickly extinguishes the blaze and the two make haste towards the nearby town.

Season 3 also see’s the return of Carmilla and her sisters, Striga and Lenore. The trio reunite after Carmilla returns from a long voyage and completely berates them for their lack of usefulness. Battered and Bloodied, we see Hector tossed into a prison cell with a guard on stand-by, readying for Carmilla’s devious plan to take action. With a sip of virgin’s blood, she is able to regain her strength and set’s her sights on the forgemaster, and his part in the killing of Dracula. Sypha and Belmont arrive to Lindenfeld and are introduced to the township Judge, who thanks them for killing off the demon hoard. They are also introduced to Prior Sala, who informs them that Dracula had been “murdered” and demanded to know who may have killed the vampire lord. The Judge persuades Prior Sala to calm his intentions, and to be more inviting towards their guests. The group of satanist monks warn the group of their intentions to hunt down the killer. The Judge encourages the group to leave, in which they do with Belmont and Sypha suddenly becoming suspicious of the entire town.

Enthralled by its incredible aesthetic and hand-drawn animation, Castlevania really shines again, and shows how a well-adapted story can truly come to life as an engaging television series. Within the first five minutes of the episode, we gauge how stylish and incredibly detailed each piece of scenery is designed, along with foreground terrain and character animation. While it may not be the smoothest or slickest, Castlevania’s display of action, sprinkled with small doses of comedy leaves it to be one of the best westernised anime franchises ever produced. Trevor Belmont’s charm and character are in full display, along with his inebriated quips and sarcasm for his love of beer over his partner, Sypha. Alucard’s transformation will be something I look forward to seeing throughout the season, and hope to see the son of Dracula become a mentor to a new generation of slayers. Prior Sala and his cultist following gives me the creeps, and that is absolute perfection. Navid Negahban does an incredible job portraying the satanist leader with his deviously dulcet tones, that come across as subtlety threatening.

Carmilla and her sisters are obviously up to no good here, keeping Hector locked away. I found it a little confronting in the second episode where they essentially splash water on his open wounds and decide to feed him moldy, maggot-infested bread. To be blamed for the killing of Dracula, which ultimately was Alucard at fault will be an interesting spin on this plot, and how it all comes to ahead later in the season. While the first couple of episodes appear to be a little slower in terms of pacing with very few action sequences, the story engages itself on the events after the death of Dracula. It really does feel like the post events of a death, and a mourning period for our characters here. The writing is delivered to perfection, and the characters are portrayed excellently, and this is based on the first two episodes. It only excites me from what is to come further into our Vampire Slayer’s story. 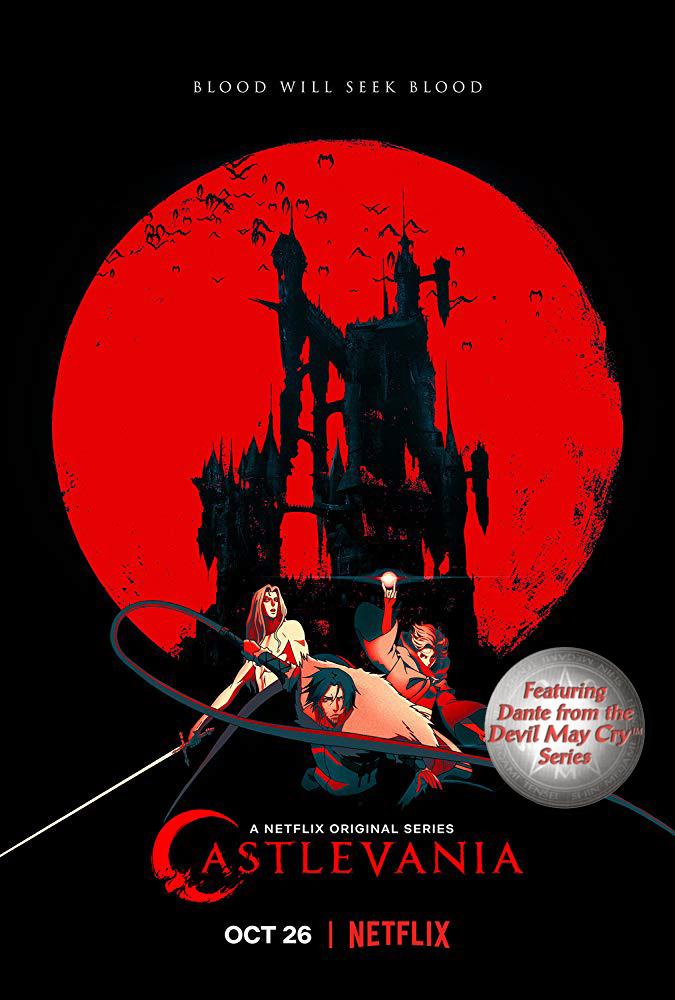 When his wife is burned at the stake after being falsely accused of witchcraft, the vampire Count Dracula declares all the people of Wallachia will pay with their lives. He summons an army of demons which overruns the country, causing the people to live lives of fear and distrust. To combat this, the outcast monster hunter Trevor Belmont takes up arms against Dracula’s forces, aided by the magician Sypha Belnades and Dracula’s dhampir son Alucard.

DASH Gamer Podcast #4 - ORI AND THE WILL OF THE WISPS REVIEW, SXSW, E3 VS. CORONAVIRUS, PS5, THE LAST OF US