Whole game is crafted with love.

A couple technical glitches, nothing major though

If there’s anything that the Bloodstained franchise has going for it, it’s that it is an amazing tribute to the old school Castlevania franchise. Crowdfunding a video game can always be a slippery slope for some people who love to see old franchises re-incarnated into a completely different form. Bloodstained: Curse of the Moon, was undoubtedly a return to form for many Castlevania lovers out there, who were yearning for their beloved series to revisit it’s roots, and try to restore some of it’s lost glory, from it’s golden-child of it’s series Castlevania: Symphony of the Night. You cannot get any better in the Castlevania series, than SoTN. Mastering a 16-bit platformer, for intentions of releasing it on fourth-generation consoles, only for development to dip into the fifth, and taking the bold risk of releasing it on what was then, a very much “3D” world for gamer’s and gaming. Let’s now scratch-freezeframe here for a moment, and separate Bloodstained completely from Castlevania. Curse of the Moon was an incredibly well designed platformer, with amazing gameplay, fantastic soundtrack, a great plot, and a phenomenal throwback for old school gamer’s like myself. Ritual of the Night, tries it’s hardest to encapsulate the same emotions from gamer’s, but it’s hitting some brick walls trying to get it’s game across the finish line, even after release.

So, I do want to start this review with my gripes first. Mainly due to the fact that the positives definitely outweigh the negatives here, so let’s talk about them first. Bloostained: Ritual of Night’s optimisation for it’s multiple platforms has been, what I can only describe as subpar. I have had multiple instances where the game has hard crashed on my PS4 Pro. I did unfortunately play through the title without applying the 1.01 patch that was released a few days prior of writing up this review. There were instances of background glitches, and seizure inducing graphical flashes, which were pretty bad. I had played around 5 hours of the title, before receiving a message from another writer to stop playing immediately, as there was an expected patch to come out due a game breaking error. Understandingly, crowd-funded title’s are always a slippery-slope, and you’re riding a risk playing them in early days, or even an early build. These titles come from tiny development teams, and for this I can hold these error’s as an oversight that does not completely affect my final thoughts of this great title.

So aside from what was mentioned above, Bloodstained: Ritual of the Night, is still an amazing game. Once applying the 1.01 update, the game was incredibly fun to play on PS4. Ritual of the Night follows protagonist, Miriam. And orphan who was almost a “test-tube baby”, that had been left with powers that let’s her absorb Crystal Shards. Now known as as “Shardbinder”, Miriam tries to find companionship, or more solace in fellow “Shardbinder” Gebel, who has essentially, been mentally and physically corrupted by his own powers. Gebel, was initially set to be sacrificed along with other “Shardbinders”, but was the only survivor of the “Shardbinder experiment”, that was being tested by the Alchemists’ Guild. Now left with said powers, Miriam has awoken from a ten year slumber to learn that Gebel has summoned Demons to take over the Earth, to gain revenge against the Alchemist’s.

Castlevania fans, you’re in for a treat here. Gameplay is amazing. If anything rings true to sending us back to days of good Metroidvania style platforming, it’s what we experience in Ritual of the Night. The Medieval tones and tropes set with it’s lavish design, and mix with it’s old school upgrades and potion collecting, along with armory, weaponry, and some Mana, it really does take us back to playing titles like Symphony of the Night. Coming across enemies are alot of fun too, experiencing different styles of attacks, and certain patterns and loops to potentially defeat mini-bosses, are diverse and thoughtfully crafted. The game really does live up to it’s fan given moniker of a “spiritual successor” to Castlevania. My only gripe with this is pacing can come off jarring due to the title’s graphical choice, instead of going full ball “Symphony”, with it’s unique 2.5D style, I felt the pacing came off a little slow for my tastes, but does not take me away from depth of this great game. Save states are totally important here, as once again there are no Auto-Saves, keeping it old-school with manual saving, and trust me, you want to save as much as you can here. The difficulty of the RoTN, is one to not take lightly. Even set on the easiest difficulty, the title will test your patience.

Beautifully crafted, the world in Bloodstained: Ritual of the Night sets itself apart from many platformers, with incredibly designed layouts and stunning terrain designs that make you gush in awe. The Anime tropes do shine through in this too, with character designs looking great once again, with Miriam and Gebel having the true Anime art-style experience with their unique outfits, and semi-human form. Enemies can range from small to large, and depending on size, comes strength, which you will be able to gauge through the game’s simplistic, non-invasive UI, which is really well done. Being able to track where you are on the map is awesome, and being able to customise the map on screen to see how far you are in to level, and how far off a save point you are, is extremely helpful here.

Sound design is awesome. Of course, not all dialogue is spoken in-game, but most of the important parts are read out by character’s, with their extremely talented team of VO’s who make the experience much more immersive. Cutscene’s are wonderfully done, and adds a completely new depth to game, which I was totally blown away by at times. They were totally unexpected from myself, and was surprised at how well they achieved this feat. The soundtrack to the game reaches a new level, with it’s Symphony of the Night inspired music that leads it’s own spin on the amazing franchise that this series has become. Moments of action are bought with heart pounding tracks, along with slower contemporary tracks added for heartbreak and despair. There is the argument that some of the tracks are misplaced at times, but I could argue that the placement of said tracks are actually well thought out. It’s gamer’s discretion at that point.

Bloodstained: Ritual of the Night is an incredible follow-up to Curse of the Moon. As a fan of Symphony of the Night, I feel privileged to have been able to experience this title. Amazingly thought out, developed by a passionate team of indie developer’s that are obviously passionate about the old school Castlevania franchise. Games like this, and their dev team’s are not common these days. We’re now in an environment with gaming, where game’s are commercial and corporate, and you can tell when there is no love put into a title. Well, after playing Bloodstained: Ritual of the Night from start to finish, you can definitely tell the time and effort put into this modern classic, and potential cult hit, has nothing but love in it’s ingredients. A platformer that takes no prisoners, with a kickass female protagonist, a story of tragedy and heartbreak, and an awesome adventure it leads you on, that’s what you want out of a video game, and Bloodstained: Ritual of the Night delivers. 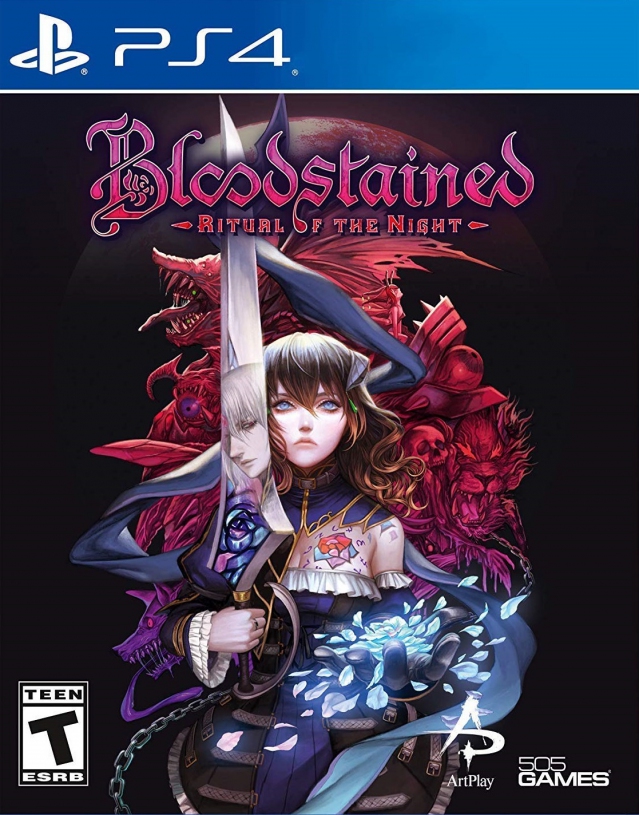 Bloodstained: Ritual of the Night is a Metroidvania video game developed by ArtPlay and published by 505 Games. The game’s development was led by former Castlevania series producer Koji Igarashi, and is considered a spiritual successor to the series.