YU-NO: A Girl Who Chants Love at the Bound of this World Review
0Shares
0 0

When it comes to visual novel titles, there is none greater than the Science Adventure series. Steins;Gate has personified what makes the genre special in perfect sequential pacing, and story telling. However, prior to the Science Adventure franchise, ELF Corporation had their hand in the category releasing numerous visual novels and “Eroge” based Anime titles, dating back to the late ’80’s. The studio’s acclaim to fame came through it’s numerous releases of it’s Dragon Knight franchise, which played the part of a typical dungeon crawler, corridor RPG title from that era. It was an experimental phase for risque based titles to even pass the rating board, some countries easier than others, but their titles did make it to multiple platforms from the TurboGrafx-16 to Windows-DOS. While garnering success with their Eroge-based platform, the studio decided to take a risk and develop an adult title for a mainstream console, something that had only been seen on the grey market, and unofficially published for the Atari 2600. YU-NO: A Girl Who Chants Love at the Bound of this World’s initial mainstream release was December 26, 1996 for the Sega Saturn. The title had been filtered to remove some sexual content from the original version that circled the PC-98 platform earlier that year. It was bold move by the development company that paid of profoundly, that not only saw it garner mainstream success, but acclaim for it’s incredible writing.

YU-NO’s legacy within the visual novel genre, inspired a new generation of games within the category that includes the Science Adventure series, itself. With that said, 5pb., the developers of Steins;Gate, decided completely overhaul the title in late 2017, with a remastered release on the PS Vita, using the same engine they have been using for the Steins;Gate franchise. With Chaos;Child & Steins;Gate’s inspiration drawing heavy from the title, it was no secret as to why the Japanese developer decided to remake the title, in somewhat of a tribute to the studio’s success. The title had not seen an official Westernised release prior to it’s launch on the handheld, but thanks to Spike Chunsoft (2017) and Numskull Games (2019), an official translated port has now landed for everyone to experience. Of course, 5pb. did suppress sexual content from the title, with explicit imagery being completely removed, only leaving lewd innuendo in conversation between characters. However, the visual representation resonates 5pb.’s standard nature in high quality visual novel presentations, alongside it’s simplistic role-playing engine we’ve come to love from the development studio. Bringing this title into modern day gaming however, is a big risk for the studio due to it’s outlandish nature in plot and story. But one I believe, has paid off and will go down in infamy, as one of the greatest video game stories, ever told.

Our story begins on the rooftop of Sakaimachi Academy, where our protagonist and high school student, Takuya Arima lays staring up at the clouds. He often reflects on his dark past, with the loss of his mother at a young age, and father; a well established and respected archaeologist who goes missing after an accident during a science research excursion, and is presumed dead. Takuya lives with his step-mother Ayumi, who has taken up the task of managing an unpopular construction site, and promoted to Project Manager of Geo-Tech, the venture deal that has lead her next to the exact site where Takuya’s father had disappeared. There had been rumors of unusual events occurring near the site, including strange weather patterns, unexplained lightning strikes which has incurred sudden accidents to workers there. After a long day at school, Takuya returns home to a mysterious package which entails a strange relic inside. He begins examining the item, with no clue what he has been presented with. While this happens, a live report from the Geo-Tech site plays on television with Ayumi directing workers and protesters amongst the crowd. A lightning strike hits the site, with the report going off-air. Takuya distressed for his step-mother’s sake, rushes down to the site to check on his Ayumi’s safety.

The basis of our plot leads to the belief that the relic that had been shipped to Takuya, helps him shift the timeline into alternate realities and events. So while more lightning strikes occur, these are represented in a time-and-space shift. However, Takuya’s relic allows him to manually shift these events, and allows him to travel through time and allow him to reshape, modify, or revise events that may have occurred previously, but also allows him to traverse through multiple realities. This all plays in part with the game’s fundamental mechanic known as A.D.M.S (pronounced Adams, Auto branching mapping system) which aids our protagonist in aligning different timelines throughout our adventure. This all leads to Takuya meeting our titular character YU-NO, an “elf-girl” who holds they key to the entirety of the game’s essential plot. While being completely vague, the plot line screams Steins;Gate, with it’s foundation being laid between the divergence of different time streams. While reality exists, it is all created amongst perception and could be changed without anyone knowing it. We could all live within a reality that changes from one second to the next. It’s a fascinating narrative, one for which I am a total sucker for. However, with the risk of telling a time travel tale, you run the risk of convolution and plot holes. This does occur somewhat in the story, but unless you are in this to microscopically trail-out every minute detail, it won’t become evident.

Much like 5pb.’s previous Science Adventure entries, the gameplay is quite simple. It won’t be everyone’s cup of tea, and may be somewhat cumbersome to few, but it definitely pulls you in for a great story. You have to remember, with visual novel’s you aren’t in it for an immersive gameplay experience. You’re in it for it’s explanatory story, and to vicariously live through each character on-screen, and YU-NO’s solid narrative allows this. There are multiple options on screen that allow you to explore each setting in-depth, throughout your time in the title. It’s intricacies allow you to explore and revisit each alternative path, you may want to visit or replace. This on a grand scale allows you to tell your own story, while maintaining the game’s core plot-line. Interacting with characters on-screen, is as simple as navigating your cursor over each icon that represents Takuya’s movement. Whether it be, talking, gazing, running, or searching for our next plot-point, the title does a great job in pushing it’s story further without completely bottle-necking the entire narrative. While the lewd and crude dialogue between Takuya and many female cohorts through the tale derive from typical anime tropes, they are completely drowned out by the fantastic writing by the original development team. A great chunk of the “hentai-like” tropes have been removed from the story, to center it’s innocence around it’s incredible plot, while still maintaining it’s impeccable comedic timing.

With the remaster deriving completely from the source material, the title’s presentation does a remarkable job at redesigning the original’s art style, amalgamating 5pb.’s incredible on-screen UI representation that we have all come to love from their established franchises, and meshing them with the title’s existing presentation. While it may be perceived as a graphical upgrade to some, this is a complete overhaul from it’s inital release, that allows a smoother experience for players that are looking for that relaxed, streamlined vibe they have come to expect from the Japanese development studio. Stunning animation, and character design are represented along with fully voiced Japanese dialogue from popular voice actors within the eastern industry. Understandingly, while this may represent a niche market, much like the Science Adventure franchise, we aren’t treated to a fully dubbed English dialogue. However, being treated to a completely translated version of the title, is surely a treat of it’s own, and to experience this game as it was fully intended has been a delight in itself. While the official soundtrack may not be memorable, it’s quite contemporary, and does set the tone perfectly for each encounter.

YU-NO: A Girl Who Chants Love at the Bound of this World has left it’s mark on the industry, as a title that had the intention of coming in as an erotic novel, that displayed heart. It’s plot-line shines through it’s trials and tribulations of maintaining order, while trying it’s best to connect and engage with our protagonist on a personal level. It’s re-delivery into modern gaming has been a welcome one, with it’s incredible narrative highlighted above it’s lustful intent. It may still be lewd, but it certainly shows a lot of promise for those who are looking for a compelling story. It’s zany original characters will make you fall in love with the incredible world surrounding it’s unbelievable plot, while taking time to appreciate what true messages lie behind it’s fantastic narrative. While the pacing lands 90% of the time, you will experience some plot-holes that would be expected in a time-twisting title, of this kind of proportion. If you are a fan of the visual novel genre, this is certainly a must play title. It’s historical presence within the category will forever be etched and shown through many of it’s counterparts, that have experimented with similar traits. YU-NO: A Girl Who Chants Love at the Bound of this World is certainly one of the best visual novel titles, of all time.

YU-NO: A Girl Who Chants Love at the Bound of this World – Numskull Games 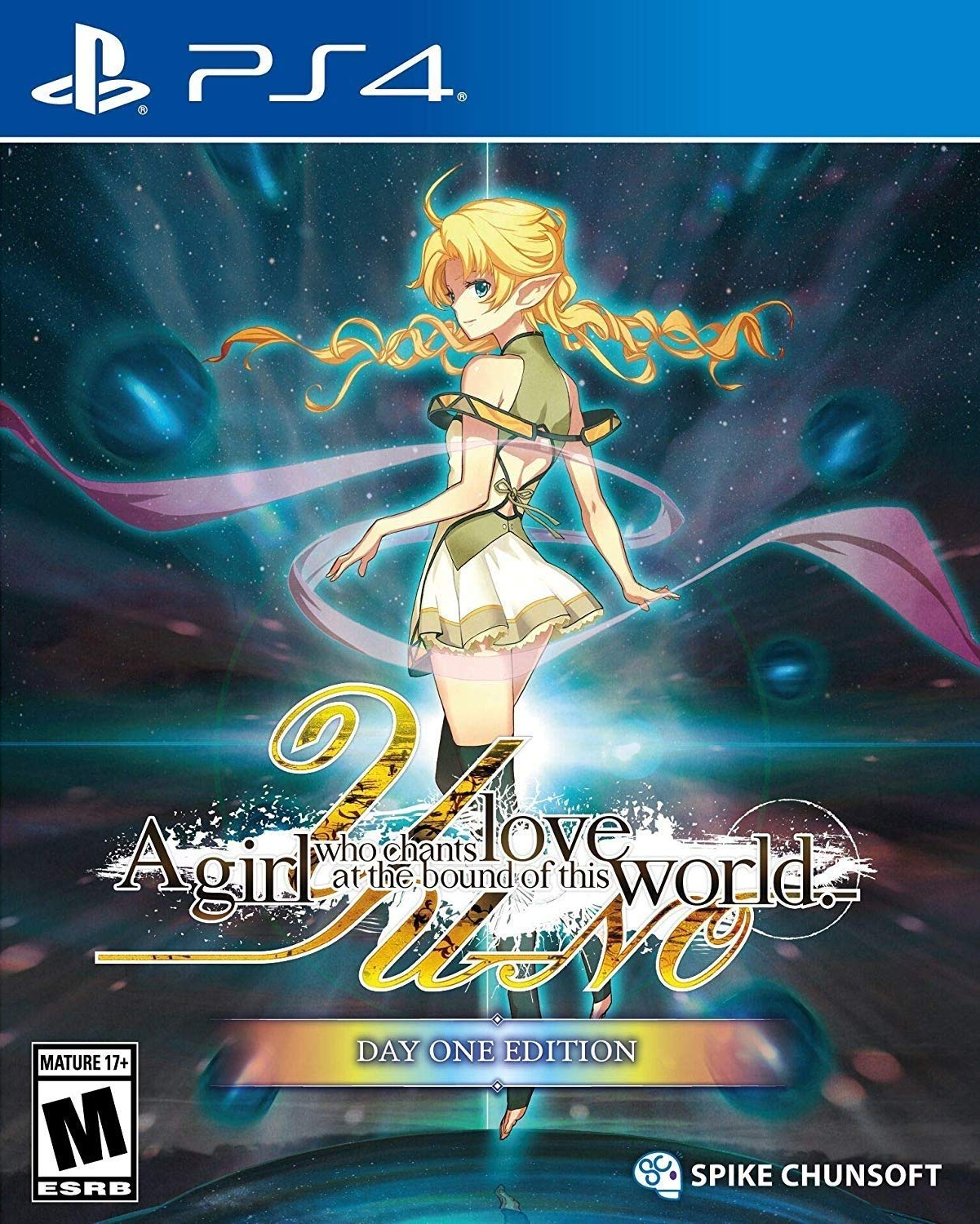 YU-NO: A Girl Who Chants Love at the Bound of this World is a visual novel adventure game developed and published by ELF Corporation.