I’m dumbfounded of what to make from this anime just yet. I’m two episodes deep and I’m still kind of confused by it’s entire plot. I will state that I am most definitely surprised in how invested I became within the first two episodes of this unique series, based purely on it’s awesome animation style. But the question that beckons me is, am I actually as invested into these characters of this quirky comedy as I would like to be? And to answer that, I really am unsure. What I am sure of, is that it will be a plot that will need some more time to develop, and to completely comprehend. That is also why I am prepared to give Toilet-Bound Hanako-kun, a little leeway before I decide whether I will continue watching. Regardless, there is potential here, and I would like to share it with you in the return of Anime Analysis. So before we dive deep into the anime, let’s wind back and give a little history as to why we are being treated to this franchise.

Iro Aida‘s Toilet-Bound Hanako-kun (Jibaku Shōnen Hanako-kun) was first serialised in Square Enix‘s Shonen Manga Monthly GFantasy in 2014, with 12 volumes included in the magazine. Yen Press officially licensed the manga, to be translated into English while the anime had been commissioned and already begun airing, which in itself is quite a rare occurrence. As of September 2019, the manga has had an official 11 volumes in print while 9 volumes have been officially translated and are available digitally. While it’s manga demographic may be classified as Shounen, the anime series has been deemed more of a comedy-horror. The first season is now available to view on-demand, for AnimeLab members.

Yashiro Nene, a young female student attending Kamome Academy, overhears a strange rumor circling school halls that the institute had been bestowed with the famous “Seven Mysteries” (a common trope within Japanese schools consisting of supernatural stories). While each supernatural occurrence had been labeled as mere fantasy, the one that was most inescapable seemed to be it’s “Seventh wonder”, Hanako-san of the Toilet, the ghost of a young girl who haunts the lady’s restroom at the academy, granting a wish to anyone who can summon her. The thought of having any wish come true was almost too enticing for Nene to neglect, thus heading into the bathroom and summoning the Hanako-kun… who turns out to be the ghost of a young boy. She tells him of all the tales that have swirled the school halls including wearing a long pink dress, and while he confirms that every one of them are in fact real, he denies being a girl, and says that his “sense of style has changed since”.

Nene then asks Hanako to help her fulfill her desired wish to have Minamoto-senpai (Minamoto Teru) fall head over heals in love with her. Hanako agrees to help, but says that he would rather her take a worn down, tattered self-help book of love strategies, as it is a safer method than using any supernatural abilities upon humans, as it all costs a certain price. After getting to know Nene’s personality, he asks if she has any interesting hobbies that may attract Minamoto-senpai into dating her, in which she responds with gardening, as her previous love interest preferred girl’s with more feminine interests such as cooking and sewing to match. She explains to Hanako that she had already attempted to lure Minamoto multiple times in the past, only to be immediately rejected. This inspires Hanako to help Nene with her problem, but ultimately warns Nene that there would be a lifelong cost that could be dealt with the ultimate sacrifice, her own life.

So, the word “convoluted” comes to mind when thinking about the first two episodes. There is so much happening that is unexplained, that could potentially discourage viewers from returning to this series. However, it’s intriguing plot still has me wondering what will ultimately happen to Nene, and will her determination lead to finding love? or will it all come crashing to a halt? The problem solely lies within it’s characters right now, and their bland backstories. Their personalities are certainly bubbly, but I have not found a connection with any of them thus far. I have no emotional attachment to Nene, Hanako or any characters that we are introduced to late into the second episode, which I will leave out for potential spoilers. With everything I’ve stated, it all sounds so negative but the funny thing is, I’m willing to continue watching mainly due to the fact that it has left me questioning, rather than being completely entertained.

I certainly am a fan of it’s art style, which immediately caught my attention with it’s eye-grabbing animation and unquestionably vibrant palette. It diverts itself from the norm of any art style seen commonly in anime, and rather takes on an almost “pastel” kind of appearance. A very “cartoony” design, but is eye-candy for those with more of a complex eye towards any Japanese Animation. I’m not completely sure what sold this story on becoming a fully fledged anime, or the reason it was commissioned to be an animated series just yet, and seeing that it has had minimal cultural impact on the manga scene from any information I could gather, it really does have me pondering why this series even exists in an animated format? There certainly must be some popularity behind it for there to be any consideration of an animated television season, right? Just as it is in the plot, this one has certainly left it’s mark on me as a mystery but am intrigued enough to continue watching. 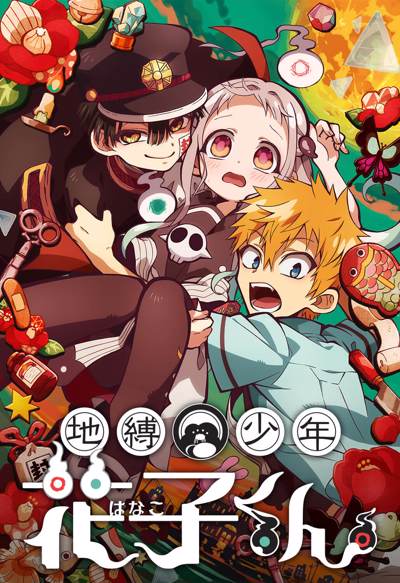 It is said that “Hanako-san” lives in the girl’s toilet on the 3rd floor in the old school building and will grant anyone a wish for a price. Yashiro Nene goes looking for “Hanako-san” in the hopes for a successful love encounter, but the one that she meets is completely​ different from what she imagined.