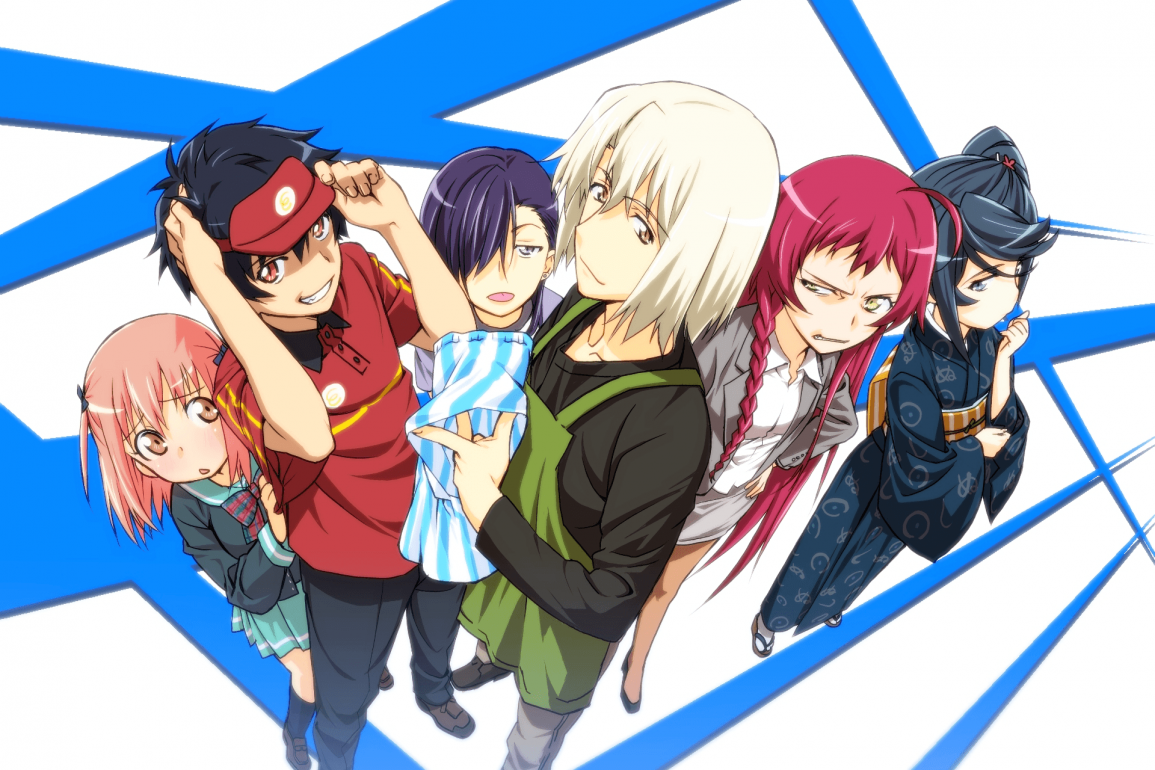 The Devil is a Part-Timer! – Anime Analysis

The Devil is a Part-Timer! (はたらく魔王さま!) 🔗

Generally, the isekai genre is an isolated category that varies from series-to-series. Its identity may be unique, however narrative-wise the genre holds a catalogue of anime’s that neglect to grasp a certain type of niche, or plot line told. Quite honestly, it’s probably the adequate explanation you could apply to The Devil is a Part-Timer!. The series foregoes a formidable narrative for intriguing characters with engrossing impetus. Mythologically or Religiously speaking, it’s a rare occurrence to see Satan portrayed by a fictional character, and the hero of the tale. It certainly leaves a questionable motif surrounding the concept that the Devil has always been characterised in a negative light, without solid evidence to back-up these pre-conceived notions. However have we ever seen the Devil, unwillingly transform into a teenager, without his powers, transported to earth without a dime to his name?

Originally a 2011 light novel series, The Devil is a Part-Timer! (Hataraku Maou-sama!) made its Mangaka serialisation debut in the February 2012 issue of ASCII Media Works’ Shonen magazine, Dengeki Daioh. Series creator Satoshi Wagahara, had no ambition to initially create a manga tie-in to his already established novelisation. However after winning the Dengeki Novel Prize in 2010, the studio licensed the franchise with Yen Press as publishing partners, and began production on its Mangaka adaptation in mid-2011. The final chapter of its light novel publication had recently released; scheduled for a July 2020 release but was delayed to August 7, 2020 due to the COVID-19 pandemic. The Manga tie-in has spawned two on-going sequels from the original series. Receiving acclaim for its comical tropes, studio White Fox had commissioned the anime adaptation with Director Naoto Hosoda (Future Diary, Lupin III) at the helm, with renowned Screenwriter Mashairo Yokotani (Sakura Quest, Rascal Does not Dream of Bunny Girl Senpai) supervising the series’ writing team.

The series is now available on DVD and Bluray from Madman Entertainment, and streaming on AnimeLab.

Seeking to conquer the Ente Isla, a parallel universe inhabited by humans centuries ago, Satan and his four demon generals seek to annihilate our species in hopes of annexing the Isle’s four continents. Confronted by town hero Emilia, Satan is forced to retreat, leaving three of his four assistants behind. Alciel and Satan enter a mystical portal that lead them to modern day Tokyo, with no powers, no money, and ultimately left uneducated on society. With the duo transporting across the two realms, their appearance unwillingly morphs into a humanistic representation of two unruly adolescents. Stranded, the former demon lords seek refuge but are arrested by Police officers on suspicion of their attire. Speaking in his native tongue, Satan uses the last of his powers in hopes of understanding the way of the world, and how it seems to function without misappropriation.

Enlightened by humanity’s conformity, Satan and Alciel escape their detainment and seek sanctuary. The pair disguise themselves as exchange students, portraying bumbling teenagers that are seemingly lost and homeless. Believing they have scored a complete steal, they soon discover that instead of moving into a “new palace”, they would in fact be renting out a one room apartment littered with garbage, and infested with vermin. Knowing full well they had no ultimatum, Alciel signs the lease agreement. Soon thereafter, the rogue hellions discover that they must survive on Earth’s currency and economic system, which leads Satan to pick-up a part-time job at global fast-food chain, MgRonald. Adopting the alias “Sadau Maou”, the crimson gazed prince adopted his assiduous standards to his newfound love of flipping burgers, albeit with an ulterior motive.

While he may be a former shell of his once mighty self, the foolish fiend still harbours a firm hatred towards humanity. While displaying a positive attitude, a strong work ethic, and a grin that would light-up the entire restaurant, the devil’s dastardly deliberations would be his motivation for seeking retribution, one burger at a time. Yes, the Devil believes he can rule the world by making his way up the “figurative food chain”. Then again, it kind of makes sense, right? While vowing to conquer Earth, eradicating humanity from existence, Maou still evokes his humanitarian instincts which is quite uncharacteristic of the malevolent overlord. On his routine bike ride to work, Maou is caught by a downpour that has him use an umbrella packed by Alciel. While waiting at a busy intersection, a young maroon-maned female comes rushing up beside the teen, thanking him for sharing the umbrella with her.

Maou offers the girl the umbrella to keep, in which she reluctantly accepts. Speeding off through the puddled pavement, Satan arrives at his part-time job ready to serve every customer to the best of his ability. With nothing but the utmost devious intentions on his mind, the dastardly demon delivers his hand crafted delectable’s to the admiration of his of his tiny co-worker, Chiho. The young lady hides her true feelings towards the crimson cloaked fiend, but is not shy in expressing her reverence. During the afternoon rush hour, Maou starts to experience a panic attack in which he questions his self worth. Store Manager Mayumi Kisaki reassures him that not only has he been doing an incredible job, but he would also be receiving a promotion. While celebrating his new role, Satan is stopped on his way home by the same girl that had shared his umbrella.

Observing the veiled villain from afar, the young woman informs Satan that she had doubts of his appearance but all was confirmed when she spotted him casting a spell while at work. Moau questions the teen’s identity, in which she is ultimately revealed to be Emilia, the savour of Ente Isla.

So this is tough. While its narrative seems to take a backseat from its overall premise, The Devil is a Part-Timer! is still a compelling tale of the deviant archangel, finding his way while stranded on earth. There has always been something mystifying of tales told of biblical figures, stripped of their magic and planted within a world they are unacquainted with. It’s almost a rich-get-poor story, using their pre-existing will to climb back to prominence. Is it a retribution tale? Possibly? But I don’t see it playing out this way. Satan – or Maou – is met with numerous predicaments while working his job. What the Devil did not plan for was a bounty placed on his head. Many shape-shifting demons crossover to Tokyo, in hopes of capturing the demon lord and returning him to the past. With minimal powers at his grasp, the Devil becomes the favourable protagonist and ultimately the hero of this story.

From malicious mastermind to saviour of humanity, I’d say it represents a “coming of age” type of reclamation for Satan. We see various fictional representations of the Devil incarnate, but none have ever tried to impose a connection on a personal level, such as The Devil is a Part-Timer! While its presentation is nothing extraordinary, nor will it be perceived as anything monumental, the series is a testament to its comical efforts which are fantastic on that merit alone. It’s a lazy Saturday casual viewing experience, that will engross you with its quirky cast of characters and ridiculous plot. You may find its narrative a little cumbersome with a myriad of filler episodes, purposely placed to prolong its arc, however its ambitious story is strong enough to encapsulate anime fans and show that even the most duplicitous, show disposition.

I do love me a great isekai, especially one that deviates itself from any form of normalcy and completely throws all sense of logic out the window. The Devil is a Part-Timer! is a primary display of these attributes. While it may not be prominent for anything other than its laid back appeal, it’s still a solid experience. With numerous anime in the market vying to replicate its premise yet failing to garner its exact appraisal, The Devil is a Part-Timer! leads as a great example of character progression. While the narrative may stay stagnant, each character shows growth through its brackish universe. There is a beginning, and an end, but the series’ is almost at a standstill in the midst of its eccentric plot, and humorous tropes. The Devil is a Part-Timer! is recommended for those looking for a myriad of mystical mayhem, and nonchalant nonsense.

The Devil is a Part-Timer! – White Fox 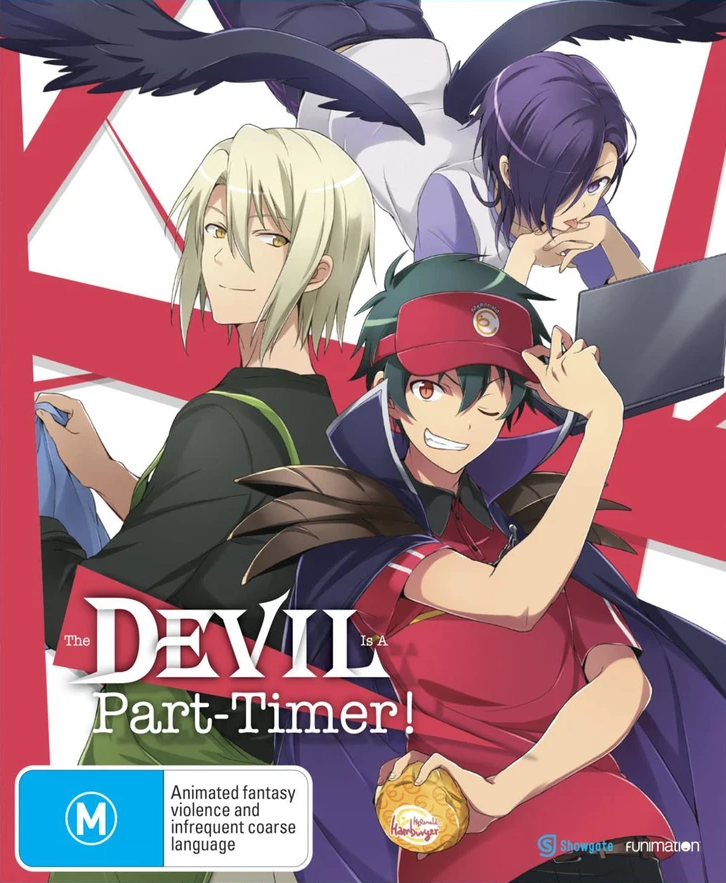 The Demon Lord Satan seeks to conquer the world of Ente Isla by annexing its four continents with the help of his demon generals Alciel, Lucifer, Malacoda, and Adramelech. After being confronted by the hero Emilia and her companions, after they had killed Malacoda and Adramelech, Satan and Alciel escape the world of Ente Isla through a gate to modern Tokyo, Japan. However, due to the lack of magic in the modern contemporary world, both Satan and Alciel change into forms representing what they would look like if they were human. In order to survive, Satan takes a part-time job in a fast food restaurant named MgRonald, while Alciel serves as his houseman. One day, Satan, who now goes by Sadao Maō, meets a girl who is actually Emilia in the form of Emi Yusa. The story then unfolds and explores the personalities of each of the characters and their moral values. More characters show up from Ente Isla and they too face the new world dilemmas, often comically.

The Devil is a Part-Timer! – Anime Analysis 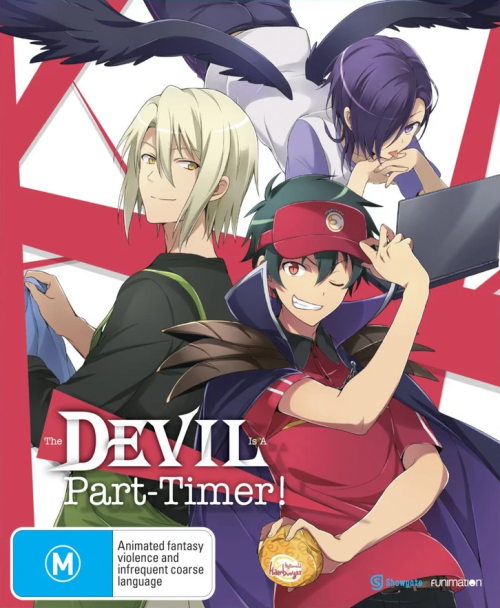