Tension, Immersion and Caring about the Characters

“Sometimes those decisions take a long time to have repercussions, but there are repercussions…there are always repercussions”. These are the wise warningly words delivered from The Curator, one of the integral characters in Supermassive Games latest twisted interactive survival horror games, The Dark Pictures: Man of Medan. Supermassive Games first foray into the interactive drama and survival horror genre came in 2015 with Until Dawn, which received great critical and commercial reception, selling almost 2 million units of the PlayStation 4 exclusive. Considered a sleeper hit (My personal game of the year in 2015 and games of the generation), its success spawned two spin off VR titles and lead to Supermassive announcing The Dark Pictures anthology series. A series that would see a game released every 6 months from the same universe but focused entirely on self-contained stories from various horror mythos, tropes and urban legends. Having already committed to four games now on multiple platforms, Man of Medan is the first release.

Man of Medan’s story is based on the real life alleged existence of a ghost ship, the SS Ourang Medan. The urban legend has never been confirmed as real and the circumstances around its possible demise have varied from accidental to paranormal. Our story takes place in the South Pacific and focuses on four young Americans, brother sister duo Julia and Conrad, brothers Alex and Brad and their dive boat trip captain Fliss. The friends are on the hunt for a rumoured World War 2 wreck when a storm erupts and they are confronted with and end up trapped on the alleged ghost ship. Think Ghost Ship but without the overly campy B grade garbage. Outside of a short introductory prologue that provides story context, the game takes place over the course of one night, much like Until Dawn.

For people that have played Until Dawn, Man of Medan will be very familiar as it looks, feels, plays and shares a lot of similarities with its predecessor. Gameplay combines the use of quick time events with face buttons, picking up and interacting objects with shoulder buttons, using the right stick decide on one of three dialogue choices and a small mini game that requires the player to press X (PS4) at specific times to match a heartbeat, much like a quick but simple rhythm game. Thankfully the heartbeat mini game seems to have replaced the keep still motion controls from Until Dawn that inevitably killed my beloved cheerleader and cursed my “canon” playthrough. The controls aren’t complicated and are swiftly introduced in the prologue without overstaying its welcome, which could have bogged you down like in some other games. In saying that, the quick time events are timed and one wrong move can bear dire consequences. The underlying tension of running from a threat, fumbling over objects and knowing your quick witted, cheeky but loveable, duffus favourite could perish at any moment adds excitement, importance and fun to the QTAs.

As previously mentioned, there are two to three dialogue options when it comes to character interactions or choose your own adventure style decision making. The three options include say nothing and a head and a heart decision. All actions have consequences from characters relationships with each other that play out over time, to more direct and immediate consequences, such as death. These decisions are recorded and tracked in the progress menu under “bearings”, which has eight different key plot points, allowing you to see what decisions you made that progressed a bearing and which decisions you made that ended certain bearings or story threads. This menu also contains a page for the games secrets, 50 in total, and the pictures you have obtained, of which there are 13 to collect. The pictures are of old nautical vessels and finding them shows you a quick premonition of a future event, most often a characters death. There is nothing worse than watching a premonition over and over analysing what future choice to make, for it to all go wrong and the premonition come to fruition. I also spent a lot of time scouring each nook and cranny trying to find memos, artefacts and other secrets that added much needed clues to the history of the boat, what has happened and hopefully how I could proceed. Characters also reacted with this info and spending the time buried into the lore was one of my favourite things about Man of Medan.

Visually the game is stunning. The game is letterboxed for a more cinematic presentation and feel without compromising any wider shots or aspect ratios. This is supported by a non-existent HUD that helps game and story immersion. Once again the cinematography relies on tried and tested horror techniques that worked so well in Until Dawn. From out of focus figures in the backgrounds of shots, visceral close ups of recently deceased characters, long tracking shots, fly on the wall perspectives and awkward shots like watching a character walk down stairs from underneath the stairs creates tension and a feeling of unease. It’s all part of the package and without these touches, Man of Medan may not have the same impact it has. How the camera is positioned before a jump scare is also important, and boy there are plenty of them! Jump scares can sometimes feel cheap but I feel the ones in Man of Medan made sense and were earned rather than cheap overused fake outs which can plague the horror genre. I also felt like the score or sometimes lack of score and random creepy noises on the ship added to the tension.

My solo playthrough lasted roughly 5 to 5 and a half hours whilst being very thorough with collectables and this pacing, considering the number of characters and setting, felt just right. Much more accessible and digestible for time poor people or players that prefer one sitting or multiple playthroughs. Perfect for their other two modes on offer, Shared Story which allows you play with someone online and Movie Night. I haven’t experienced Shared Story yet but I did experiment with Movie Night. This mode allows up to 5 players that can control one of the central characters. Each time it’s that characters turn, the game will tell which players turn it is, passing the controller around. Whilst I did this manually with my friend in Until Dawn, it’s good to see a party mode like this introduced and not just relying on the person holding the controller to make yours or a groups decision without having a last minute overrule or change of heart.

Another highlight were the performances. Shawn Ashmore, who is known for his roles in X-Men, Animorphs, The Following and Remedy Games’ Quantum Break, played Conrad and in my playthrough went from a stereotypical dude bro character to someone more nuanced and willing to take action and acceptance for the situation around him. Pip Torrens, known for Pride & Prejudice, Poldark and The Crown, has the most captivating performance despite the most limited screen time as The Curator. The Curator shows up in between scenes two or three times in the game, breaking the fourth wall and speaking to you as the player. He acts much like Peter Stormares Dr. Hill character from Until Dawn, offering hints to you and foreshadowing what is to come. He also hints at what’s to come, updates you on your current situation and reminds you of some your not so good decisions. Despite the stories being self-contained, I did get the sense The Curator may be a through line in each of the anthology games as the stories appear to come from his library.

Despite really enjoying my time with Man of Medan, it was not without its small faults. Scene changes and some panning shots were met with jittery frames but they weren’t enough to fully pull me out of the experience or break my immersion. I suspect some of these issues to be cleaned up day one. The only other annoyance was character movement through room to room or through camera changes. Holding down on the analog stick to walk down a corridor only for it to change angle from behind and your character suddenly stops or gets caught because you have to adjust direction happened regularly. Once again not enough to ruin any experience, but more so in this title due to the confined and narrow nature of the setting.

Two of the five characters survived in my “canon” playthrough and with plenty of replay value Man of Medan is a must for horror fans and people who enjoyed Until Dawn. Telltale Games or Quantic Dream fans should also check this out as I truly believe Supermassive Games are now the leaders in this style of interactive storytelling, even in their infancy of the genre. If Man of Medan is a sign of what’s to come for The Dark Pictures anthology series then horror games are in good hands and we should expect some high quality releases and unique and compelling stories from them over the coming years. 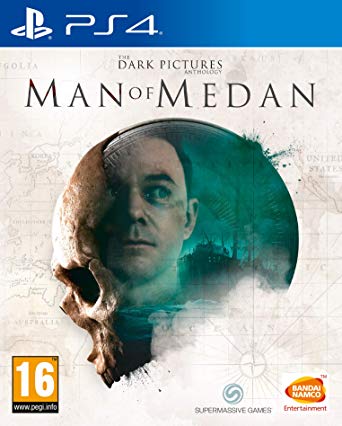 The Dark Pictures: Man of Medan is an upcoming interactive drama horror game developed by Supermassive Games and published by Bandai Namco Entertainment.