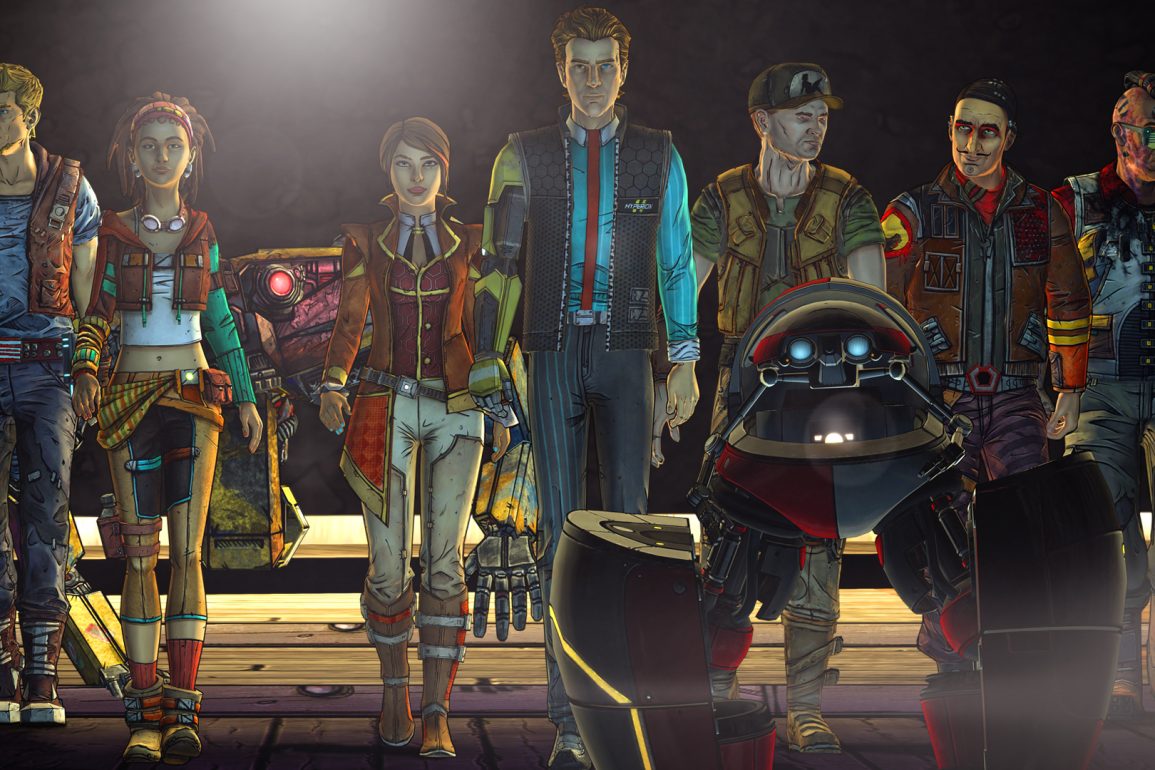 Tales From the Borderlands Review

So let me tell you, I have been binging everything point-and-click thanks to Life is Strange. I was not a fan of point-and-click games whatsoever. I thought the genre died along with Monkey Island, years ago. It was always a genre I believed was completely niche, and had no place on the mainstream market. Something that “had zero gameplay” and “no substance”. Wow, I can now write this and say that, I was completely, and utterly wrong, and I apologise to these great developers who create, what I believe to now be, Triple-A titles. Which brings me to this title today, Tales from the Borderlands. When this title was announced back in 2013, there were many questions to ask. Was this going to be another Borderlands Pre-Sequel? Was Telltale about to re-invent Borderlands? Or were they about to do what people thought was impossible? Take an already established, well recognised, and hugely poplar franchise, turn it on it’s head and make it into an awesome, story driven adventure?

Right from the start, we’re placed in the middle of the story and introduced to the first of two protagonists in this tale. We meet Rhys (Voiced by the ever talented, and awesome Troy Baker), the Hyperion office lackey, who is trying anything and everything in his power to rise-up in the ranks to rule Helios, just like his hero, Handsome Jack. We establish that this story is after the events of Borderlands 2 here, and for those who have not completed Borderlands 2, there may be some spoilers ahead here, so you may want to look away now. Being promised a promotion from former Senior Vice President Saul Henderson, Rhys makes his way to accept said promotion, only to find that his office had been overtaken by Rhys’ arch rival, Hugo Vasquez (Voiced by Puddy himself, Patrick Warburton). An egotistical, power-hungry, selfish prick of a boss, who is doing everything he can to keep you out of his way, and out of the picture. And just like any leader of the Hyperion, Vasquez is organising a real shady deal between himself, and a gang of Vault hunters down on Pandora, to acquire a vault key. Rhys taps in on this deal, and decides that he’s going to go after Vasquez’s deal, with a little help from his friend, Vaughn (Voiced by Nerdist CEO and Comedian, Chris Hardwick).

But as it’s always been said, there are two sides of every tale. And while Rhys is planning to extract revenge on Vasquez, he has no clue that he’s about to be screwed out on the deal by the second antagonist of this awesome title, Fiona (Played by Critical Role’s own, Laura Bailey). The ultimate gunslinger, con-artist, who has the skill to talk her way out of, and into almost anything. She is guided by her mentor Felix, who is revealed to be the brains behind the scam, designing a fake vault key to be delivered to the Hyperion for a nice sum of cash. The deal is met by a mid-man, August (Voiced by Uncharted’s Nolan North) and his partner, Sasha, who plan on delivering the goods to the Hyperion. And from here, all hell breaks loose, and you are thrown right into this amazing tale, where it’s all-for-one, and none-for-all. Along the way, you meet an array of characters, that if you have played the Borderlands series before, will leave you with a range of emotions, from smiles to speechless, but we won’t spoil that for you.

The title adapts right from the source material from it’s artistic design. You do get the feeling that you have landed in the world of Borderlands playing this title, with the amazing cell shaded experience you would usually see in the shooter. With the title being overlooked by 2K Games, Telltale do their original character designs justice, making you believe that these characters have been canon to this series the whole time, and really do belong with the origin story of Borderlands. It does not feel forced at all. And we do get our callback characters placed within this title, like the obvious Handsome Jack, who is just as devious, cunning, and hilarious as he was in the main series. Jack’s mysterious design stems to his storyline from Borderlands 2, meaning that this title makes Jack’s storyline now canon within the Telltale world. So if you wanted to find out what happened to Jack after Borderlands 2, well this is it.

Now if you haven’t played any Telltale games in the past, for your fear of them “Boring point-and-click games”, fear not. I realise that point-and-click titles may not be for everyone, but this is a game that needs your attention. I’m talking to you, hardcore Borderlands fan. It may not be a shooter, but it’s still the story that you need to know. Point-and-click titles like this show that if enough though it put into it’s design, it can be quite an intuitive experience too. Not all games within the genre have to be as simple as choosing your own path, but can use it’s design like quicktime events, to master it’s genre, and become one-of-a-kind. Now, much like any other Telltale title, choosing your path in this game will result in some dire consequences, so be sure to choose wisely here. It will always have an impact on your result at the end, and may bite you on your ass too.

Music has always been awesome in the Borderlands universe. From Borderlands’ title theme “Ain’t No Rest for the Wicked” by Cage The Elephant, to the Pre-Sequels “Come with me Now” by Kongos. We get quality choice of theme music for each five episodes from this epic. Artists include Jungle, Twin Shadow, The Rapture, James Blake, and First Aid Kit. Each episodes title sequence has music to capture the vibe of the story perfectly, and places you in the mood. Personally, Episode Four’s intro gave me chills from the first note hitting my ears, with it’s perfectly synced visuals, and it’s meaning behind it all. Just fantastic choices all round. The official soundtrack designed for the title was created by Gearbox Audio Lead Raison Varner, Cris Velasco, Jesper Kyd, Sascha Dikiciyan and Sonic Mayhem. In an interview with originalsoundversion.com, Varney stated “Jesper handled all the largest areas in the game where the player would spend a lot of time exploring. Sascha and Cris really nailed the bandit’s sound early on so they provided the aggressive bandit music. I would provide some music for boss battles and other environments that didn’t fit into that model exactly.”

All-in-all, Tales from the Borderlands is a must play title. It’s available on every current gen platform, Mac and PC. You may shrug this one off, and that’s fine. But I’m telling you that it’s your loss if you do. This title here, has everything that you are looking for in an adventure game. Amazing story, interesting characters, awesome design, a sensational soundtrack, an amazing voice cast that you would usually find in mainstream titles like The Last of Us, and fantastic gameplay. Yes, I said it. It may be a point-and-click, but it has amazing gameplay. Gameplay that keeps you on the edge of your seat, wanting more. I guarantee you, by the end of this game, you’re going to want to run to Telltale’s twitter, begging them for a second season. What is great though is that you can, and you will go back into this game multiple times, and change your story around for a completely different experience.

Tales from the Borderlands is a game that deserves a whole lot more attention than it’s targeted market, the Telltale fans, and the Borderlands fans. Even if you haven’t played any of the previous Borderlands titles, don’t fret, it’s a game you can play too without any prior knowledge. I will always say that, purely storyline driven titles are hard to write reviews on, but this one was easy. Just the way everything was well crafted and put together for this amazing ride, is one I will soon not forget. The Story, the characters, the amazing sequences, that had me wanting to see more amazing sequences, gripping me on the edge of my seat, wanting more. Tales from the Borderlands will be a game, that will forever be etched in my memory, as one of the best.