A new original story, in the SAO universe

UI is a little cumbersome

AI can be a little challenging

Sword Art Online is my probably my favourite Anime series. The wonders of living in a video game, it’s almost become a reality with what we now have in PSVR, Occulus, VIVE, and other popular VR systems available to us. But the mystique and wonder of actually having a full body Virtual Reality world, to step into whenever you desire, will forever be something that we will question, that is until technology allows it. But of course, Anime logic… they have this in their world. The Sword Art series is one of the most popular Anime & Manga franchises in the world, selling over 20 Million copies of the light novel series, and grossing over $30USD Million in their recent feature length film, “Ordinal Scale”. It would be no surprise that the wildy popular franchise would have an awesome video game series, to boot.  Sword Art Online: Hollow Realization originally released in 2016, on PlayStation 4, but has been a bit of a sleeper hit amongst it’s fans, due to it’s similar connotations with the Persona series, which at the time was hitting it’s peak with the release of Persona 5 just a few month prior. However, with it’s recent re-release on Nintendo Switch, I personally wanted to try it out for the first time, and see what made the game special, especially seeing that I could take it on the go with me, and boy did that help tremendously.

The story starts off three years after the original Sword Art Online. Aincrad has been restructured to be one solid base, instead of a multi-tiered game, which has now been renamed to Ainground, where you can now battle several enemies and monsters. Being the huge sword art fan that I am, I grinned from ear to ear knowing that I was now in control of Kirito, the mainline series protagonist, who is accompanied party members and other side-characters of the mainline franchise, Leafa, Sinon, and of course, Asuna. Hollow Realization is the first game in the series to divert itself from the series canonical plot into it’s own original storyline, which is great for lovers of this solid series. It presents a unique extension into the world of Sword Art Online, which we would not see in the Anime or Manga, sort of an “alternate timeline”, if you will. However, Hollow Realization is a sequel to Sword Art Online: Lost Song, which was strongly based on the second season of the anime adaption to the franchise, and that is exactly where things kick off when Kirito and party find a new game “Origin”, a closed beta of Sword Art, to join. While playing Origin, Kirito runs into a new character within the world called “Premiere”, and invites him to partake in a challenging level of the game, misleading Kirito and party to trust her with her kindness, but her true intent is later revealed.

For those who deeply love their RPG titles, you certainly will not be let down by Sword Art Online: Hollow Realization’s gameplay mechanics. While the game’s dialogue at points may be a little stretched, thankfully these are easily skipped, and able to get into the grind fast here. However, it is advised you read the dialogue as much as possible due to important plot-points and direction you will need to follow throughout your time in Ainground. However, if you are in a rush to get through these scenes,  simply holding L on your switch’s left joy-con will let you get right into the action. Hollow Realization is very reminiscent of gameplay you would see in something like a Xenoblade Chronicles. The hack and slashing style you will come across in the title, is very much a “slash sponge”, where you come across multiple enemies in different parts of this large scale sandbox world, and will fight your way through to your next objective, with your party to assist throughout your fight. You will find mini-bosses to be a massive grind at times, and this is where you will definitely skill-build your senses in the game, later making smaller enemies a total breeze to encounter afterwards. Coming across different characters throughout your time in Ainground, is certainly a delight, with many familiar friends, but many new faces to encounter. It’s total fanservice that Anime fans like myself love to eat up.

Presentation of this world, on a smaller screen shine’s through. Sword Art Online: Hollow Realization is Amazing on Nintendo Switch. It’s the console it was definitely made for. I’m in the belief that the Nintendo Switch is home for any and all Role Playing Game’s on the market right now, and SAO sits snugly within that realm. The design of each town and terrain that you come across, just shines through on your Switch’s tablet screen, and sits perfectly in your hands. You are in control of Sword Art here, and I was totally mesmerised, playing this for a total of 50 hours. Completely enthralled by the title, it’s story, it’s amazing gameplay and graphical design, and of course having that established connection with the series characters made this title hard to put down. Some of the additional features the game had like treasure chests, side-quests, mini-bosses, and even date’s with partners, made this a total joy to pick up and play. Once again, having a full-time job, I was able to bring this to work with me and experience Sword Art Online, on-the-go. While this title may have initially released for PlayStation 4, I’m in strong belief that it has found it’s home on Nintendo Switch, and for players who have yet to experience this title, I would definitely recommend picking it up for the hybrid home-console/handheld.

The official soundtrack to the game, is incredible. There are soundtracks for many Anime inspired RPG titles out in the wild, that you can definitely tell, are just made to be injected for some “atmosphere”. Hollow Realization’s OST is incredible. Composed by Kengo Tokusashi (Final Fantasy Series, Devilman Crybaby), you can definitely tell that there was love put into this. Subtle relaxation put into the Town Inn’s soundtrack, right to the intense Boss Battle theme’s you will come across, the game’s soundtrack has been memorable for myself, even humming it while having to do mundane day-to-day tasks at work and home.Once again, and there is a pattern here for RPG’s that aren’t considered Triple-A titles, we’re missing English Voice Dub’s from the incredible actors from the Anime series. I am totally guilty of being a dub guy, and love emotion put into the awesome Anime series by the English VO cast, and I felt their absence in this experience. The Japanese VO cast however, do an amazing job, though we only experience this at points of the title, it’s hard to convey the same emotion of another language, that I do not unfortunately understand, and have to try and translate said emotion in text form as well.

Sword Art Online: Hollow Realization is awesome. If you are a fan of the series, this is definitely for you. An expansive, open world adventure that takes you on a thrill ride with your favourite cast of characters, that gives you an in-depth RPG experience, with great gameplay, fantastic design, and features a tonne of new content that you can’t experience in other forms the franchise’s mediums. The game will have you stuck in Ainground for hours, trying to find each collectible, battling out each enemy that you encounter, grinding your way through each town, wanting to experience every little thing you can throughout your time playing the game. It’s awesome JRPG’s like this that definitely make me fan of this genre, an I am so happy I experienced this for the first time on the Nintendo Switch. I believe playing this on the go portion-to-portion also made my experience with the title somewhat better than I anticipated. Having a game like Sword Art Online: Hollow Realization on-the-go made my experience with the title a positive one, one I believe that if I had played it in one swoop on my PS4, I may have had a differing opinion. But for fans, this is simply awesome, and I definitely can’t wait to jump back in, and grind a little more. Sword Art Online: Hollow Realization on Nintendo Switch, is a must have for JRPG lovers. 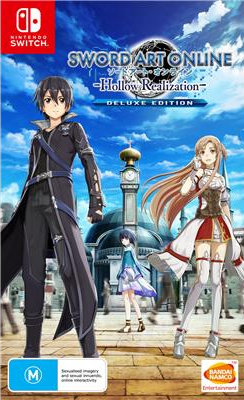 A Review code was supplied by Bandai Namco AU, for this review.

Sword Art Online: Hollow Realization is a video game developed by Aquria and published by Bandai Namco Entertainment for the PlayStation 4, PlayStation Vita, and Windows PC, based on the Japanese light novel series, Sword Art Online.