Gunplay and Swordplay are awesome

Feels at home on the Nintendo Switch

Surroundings are a little bare at times

Damn, I love Sword Art Online so much. An established Anime and Manga/Light Novel series, as popular as SAO deserves high praise much like the title we’re taking a look at here. Sword Art Online: Fatal Bullet Complete Edition takes the incredible world of SAO, and places it directly in the palms of your hands. Sword Art Online has always been praised for it’s imaginative themes that discuss the possibility of living between the real world and virtual reality. A choice on whether we face the trials and tribulations of everyday life around us, or escaping into this virtual world of mindless enjoyment. If you are unaware of the plot, Sword Art Online takes place in the year 2022, within a virtual reality massive multiplayer online role-playing game (Yes, a VRMMOPRG. Say that five times in a row). We follow the series protagonist Kirito, (Real name, Kuzuto Kirigaya) a high school student who loves escaping reality by jumping into the extensive world of VR. Kirito became one of a thousand players chosen to be a beta tester for the Original “Sword Art Online” MMORPG, but then became one of 10,000 players trapped in a battle royale style survival laden world, created by Sword Art Online’s development director and Game Master, Akihiko Kayaba. Now, you would think that it would be as easy as taking off your VR headset to escape this proposed demise, right? Well Anime logic kicks in again, as the appropriately named, and highly advanced Virtual Reality hardware known as the “NerveGear” will kill anyone who not only suffers defeat in the virtual world of Sword Art Online, but to anyone who attempts to remove their headset in real-life. Man, I love Anime.

Now, without spoiling the original series, the events of “Sword Art Online” lead teams to develop a new VR tech, that would never allow anyone to threaten humanity the way the original “NerveGear” could, ever again. With that said, new VRMMOs were developed for the new NerveGear, which allowed our beloved characters to jump back into their favourite virtual world, to once again fight enemies, live their virtual lives happily, and even continue quests through numerous other games that were cloned from Sword Art Online. This leads us to the new Adventure of Sword Art Online: Fatal Bullet. I must admit, jumping right into Fatal Bullet did come off quite confronting at first, as the change between Hollow Realization to Fatal Bullet are quite evident.

I could not place it right away, but it came to light as soon as got I passed the character customisation, and right into the action. The bright and vibrant, almost Dragon Quest-like themes that were seen in Hollow Realization were completely absent here, with a darker, much more industrial/rustic tone. While Hollow Realization also relied heavily on any prior knowledge the player may have of the Anime series, Fatal Bullet places you right into the drop-zone without knowing anything about the characters placed infront of you. You would have also assumed, character customisation would lead you to essentially be Kirito by default, but the game hints to the player to be original, and make a brand new protagonist for this new quest. Something I can respect, but let’s face it… When playing Sword Art Online, you want to be Kirito, the Hero of the story.

Fatal Bullet, is that it’s not a clone of or lifts entirely from Hollow Realization, nor does it recycle it’s formula. Instead the title tries it’s absolute best to take an original approach to the world of Sword Art Online. Fatal Bullet takes place in the world of Gun Gale Online, which is based on the spin-off Anime, of the same name. It follows the events of Hollow Realization, with GGO released by new Game Master Zaskar. Being able to jump in and create your own avatar, you are guided by Kureha, an eccentric but helpful avatar that trains you to understand the world of GGO, and how different it is from traditional VRMMORPGs. Along the way, you meet with ArFA-sys or Afasys as she becomes known as, a rare type Artificial Intelligence companion, who joins the party, along with some familiar faces from the Anime and Manga series. We catch up with characters, Asuna and Leafa who aren’t traditionally present in Gun Gale Online, but are placed in the world of Fatal Bullet’s GGO to prolong it’s story, and to familiarise fans of the original series with this new universe.

Let’s talk gameplay. Now if we are still playing the comparison game between the title’s predecessor, Hollow Realization and Fatal Bullet are night and day here. While it’s not a total departure from HR, Fatal Bullet tries it’s best to be fresh and bold, but ultimately comes up a tad short. Now, I’m not saying that the game is not fun. If you’re a Sword Art Online fan, you’re going to love all the call-backs and tropes that have been spread out through the story, but it’s gameplay is what comes into question here. Sword Art Online has always been known for it’s fast paced, action sequences that takes the hero, right into the frontline. Whether or not this is the case here, is somewhat questionable.

After designing your new avatar, and jumping into the world of Gun Gale Online, we are treated to our opening cutscene that essentially is our preface to the game’s initial training. If you are unfamiliar with Gun Gale Online, then you are going to be totally thrown through a loop of what is completely a new attack strategy for Sword Art players. Beginning the training, Instead of wielding your mighty sword to slay oncoming beasts, you are armed with artillery to shoot through enemies. This aims to be the game’s core mechanic, but as you trek further through the title, you will be able to collect physical weaponry that will enable your characters to get hands on with foes of all shapes and sizes. The gunplay aspect will take some time to get used to, as well as camera controls which I did find to be quite cumbersome. Slightly tilting the right analogue stick to motion the camera’s movement steadily, is almost impossible as I found the camera’s tracking to be quite stiff and troublesome to get a complete hold of.

However, the gunplay’s auto targeting seems to be quite generous here, where you can simply slap down the aim trigger, and the target will place itself over the nearest enemy. This however, did not work everytime, as I did find myself having to manoeuvre the camera while aiming, which should not be a problem in any title that aims to have gunplay as their main mechanic, but once again with the camera controls being almost a hassle to get a hold of, it unfortunately made for some uncomfortable gameplay. Now opposite to Hollow Realization’s in-game UI, where I found it to be overwhelming in quite a few predicaments, Fatal Bullet UI placement is helpful in dire situations. The UI does a great job displaying your Map, Health, Enemy UI, Enemy health, Companion Health, Ammo, Mission/Quest Updates, and a sequence log placed in the bottom left corner. Hollow Realization’s UI placement made action sequences so complicated, there was just so much happening on the screen, that it almost was staggering to follow, but for Fatal Bullet, now ported and optimised for portable use, I was quite happy with the UI’s placement, size and usage. Not once did it overbear my in-game experience at all.

Fatal Bullet is absolutely stunning in handheld mode. Playing the title in the palm of my hands gives off a totally new perspective from how it originally looked on the PlayStation 4. Beautifully bleak, the title’s detail shines here on the Switch, from dungeon detail to the sandy outskirts of GGO, Fatal Bullet does impress, while changing up it’s design formula from it’s predecessor. Some of the unique gameplay shines through it’s presentation, with acrobatic attacks that instill some of the style and flair the game is subtly missing. Original 2D Anime style dialogue scenes have been completely replaced by in-game rendered models, that do come off quite robotic and emotionless. However, there is no shortage in the array of artillery you may purchase or upgrade through the “Weapon shop”, that does a great job with listing in detail their variety and assortment of strengths and weaknesses, that can be modified to refresh each weapons play style. The only downside here, is enemy variety. You will find the same insect/reptile type looking drones attacking you through your time in GGO, until meeting mini-bosses through out your adventure. The aim here is the grind, and upgrading your armoury to stay ontop of your game.

Sword Art Online: Fatal Bullet’s pacing will definitely come into question from it’s fans but is ultimately quite a fun title to play. While Hollow Realization still holds it’s place as Sword Art’s best gaming entry, Fatal Bullet is still quite a solid experience for it’s hardcore followers. The game does it’s best to tell an original tale from a brand new, but almost undiscovered universe for casuals of the Sword Art franchise. But for the hardcore mainstays, they would surely get a massive kick out of this game. Stepping into the world of Gun Gale is a unique experience for fans of the Anime, and would surely garner it’s deserved attention. Like myself, being a fan of Gun Gale Online, I loved what I played of Fatal Bullet, but it came down to a risk meets reward situation, where ultimately, they took bold risks here, but the pay-off was almost the same experience you would get out of it’s predecessor. Now that’s not a bad thing, as Hollow Realization is quite a solid game, but changing the mechanics and formula can be risky, which is something I highly respect the developers for trying. Sword Art Online: Fatal Bullet is awesome. It met my expectations as a Sword Art Online fan in every way. While it might not be the perfect JRPG, I will cherish my experience with this title, and will continue to enjoy it for what it is, a great adaption to one of the best Anime’s ever made. 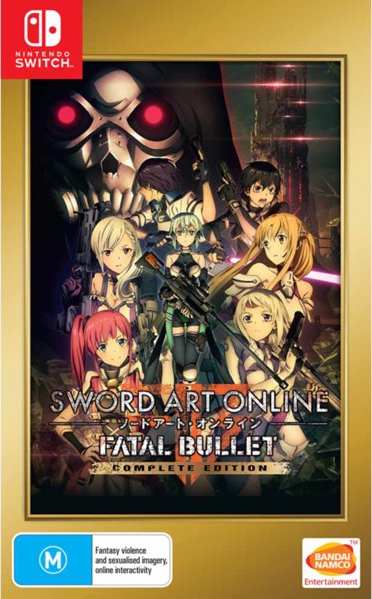 Sword Art Online: Fatal Bullet is a third-person shooter action role-playing video game developed by Dimps for the PlayStation 4, Xbox One, and Microsoft Windows based on the Sword Art Online light novel series.