Sword Art Online’s legacy is limitless, its epic tale is timeless,  its cast of fearless hero’s and heroine’s are intriguing, and its setting is brilliant. This is why its franchise deserved a mainline third season, within its overall “SAO” Universe. After the ho-hum reception SAO: Gun Gale Online received, the studio behind its animated adaptation A-1 Pictures, immediately read the room and decided a return to form was desperately needed in hopes of not only re-invigorating the series, but rebooting the franchise altogether. Inspired by the latest chapter into Sword Art’s massive manga athenaeum, Sword Art Online: Alicization is a continuation from Sword Art Online II (Season 2), and loosely inspired by events that unfold within Project Alicization. Originally published October 7, 2016, the anime premiered an entire year later with fans salivating over the seamlessly smooth animation shown in its teaser, months prior.

With an entirely new team taking over production, the franchise was revived with a creative overhaul that will no doubt further its everlasting legacy. The new series enlists Director Manabu Ono (Full Metal Panic, Overlord), replacing Tomohiko Ito, who had directed every live animation of the franchise since its inception, along with Producers Kazuma Miki and Shinchiro Kashiwada. Both Miki and Kashiwada have also departed the Sword Art anime series, while an entirely new team of Producers are heading the adaptation. Masami Niwa (Blend S, I want to eat your Pancreas), Takaaki Yuasa (Golden time, Toradora), Yosuke Futami (Oreimo, Sword Art Online), Misato Aoki (Senran Kagura, High School DxD), and Kaoru Adachi (Love Live!), Ryutaro Kawakami (Golden time) lead production in this cavalcade of contingent quality, which is surely delivered from Sword Art’s latest serving.

In an unfamiliar territory, we are reintroduced to series mainline protagonist Kirito, except the teen is portraying an adolescent avatar of his actual being. This new environment displays a lush terrain, bestrewed in a mystical yet bygone time period. Dressed from head to toe in timely commoner fashion, Kirito and his newfound best friend within VR Eugeo, spend their days cavorting while also completing daily chores. The two juveniles primarily position themselves as lumberjacks, logging trees in the surrounding area. The two brash young boys are accompanied by a bossy, young female Alice. Draped in baby blue and white, resembling the classic fairy tale “Alice in Wonderland”, the trio gather to feast on a prepared picnic. While indulging on the delicious offerings, Kirito discusses why food has to spoil so quick in the summer, and how they could preserve food in a warmer climate.

As the virtual setting is placed within a antiquated period, there are no means of electronic refrigeration. Kirito brings up the tale of the villager who plundered a cave at the foot of the end mountains to seek a sword and battle the dragon guarding a pile of treasure. The story mentions the cave was bestrewed in giant icicles, and would be perfect for food preservation. Kirito convinces the both friends to accompany him in collecting the ice. However while Alice agrees to go, Eugeo is reluctant due to town law that specifically states that no child play around the end mountains unless an adult escorts them. Alice then debunks the law with a loophole that the trio would not be playing, but would be there to collect the ice for recreational purposes. Eugeo reminds them that no matter how they may see, the village will disagree with the additional law known as “The Taboo Index”.

The Taboo Index was created as a means to keep conformity and structure within the Human Empire, and is considered absolute. No human could ever disobey what is written within the law itself. However again, Alice mentions in Book 1, Chapter 3, Verse 11; The index states that “None shall cross the end mountains, that surround the Human Empire”. She clarifies that the trio are not crossing the end mountains to the dark territory, but rather are visiting the entrance of the cave and exiting the same way. While Eugeo disagrees, he reluctantly meets with mischievous duo the following morning to explore the cave. While traversing towards the cave’s entrance, Eugeo explains to Kirito that Alice is the Village Elder’s daughter, and that soon enough their friendship with Alice, would change forever.

The Best Sword Art Season, Yet. [...] A-1 and Aniplex should be proud of Sword Art's latest offering, as this may well be SAO's magnum opus.

Her role within the town’s hierarchy would change, and would have to be trained to be a role model dismissing those who may vie for her attention. While promenading closer towards the icy mountains, the trio spot an unidentified object, similar in appearance of a shooting star slowly making its way towards the roof of the cave. Finally reaching the entrance, the group notices the room temperature drastically dropping as they trudge deeper into the dark caverns of the confined grotto. Spotting a shining light looming towards the end of the cavity, they stumble upon a hollow antre coated in glimmering glaciation. In absolute awe, the trio identify the remains of the dragon, with its bones laying bare on a boatload of treasure. Overly excited, Kirito heads towards the remains and lifts out the blue rose sword, the same sword that once slayed the mighty beast.

After collecting as many shards possible, Eugeo suggests the group head back towards the town before dark. The group try to gauge the path taken to enter the cavern but are ultimately lead to the dark territory. There, they spot two Dragon Knights engaging in battle with one shot directly in his chest, falling off his flying beast and plunging numerous feet to the dusty crimson grounds of the devious terrain. The knight then reaches out in desperation, luring Alice in to reach for his hand. In an opiate, almost euphoric lens, Alice is drawn into the Knight’s plea in which she accidentally stumbles to the ground with her fingertips crossing the threshold of the dark territory. Concerned, Kirito spots an apparition scan Alice and record her coordinates. The trio decide to make haste and head back towards the village.

The following day, Kirito and Eugeo spot an Integrity Knight cross the hills towards town. The two boys rush to Alice’s aid, in hopes of saving her before she was captured by the Knight. The town’s elder was instructed to retrieve his daughter, as she had breached the rules of the Taboo Index, and had crossed into the dark territory. Without a thought, Alice’s father arrested his own daughter with the Knight informing him of her impending execution. Kirito begs the Knight that the entire scenario was an accident, and that she did not actually cross the threshold, but touched the floor. The Integrity Knight refutes Kirito’s argument, and claims that it was enough to arrest the young lady. Kirito devises a plan to save Alice, however fails with the Knight blasting what seems to be a gust of wind, knocking out the youngster.

As Eugeo attempt to save Alice, he is struck with a sharp pain that transforms his right eye into some sort of scouter that displays “System Alert, Code: 871”. Alice is then taken away by the Knight, to be executed. This suddenly takes us back to the real world with Kazuto (Kirito) awakening in a futuristic medical facility, with a tear streaming down his cheek. We’re then taken into Gun Gale Online, where Asuna has joined a force within the the ongoing battle within the virtual realm. With Asuna fresh into GGO, her teammates explain strategies and skillsets, while also conveying that GGO is similar to bounty hunting, unlike most fantasy type adventure worlds she may have experienced in the past.

Man oh man, what an epic thrill-ride Sword Art Online: Alicization is shaping up to be. From its onset right through its first few episodes, the palpable pacing of this expeditious anime is mesmirising. Adaptation is the real key to this thriving franchise, and without spoiling any intricate detail, they have done an incredible job with this “re-imagining”. I cannot praise this season enough, with the return of some familiar favourites, and establishing a new crew of quirky characters that enrich the overall atmosphere that Sword Art’s quality ensures. Alicization guarantee’s promise in it’s hearty premise, with lofty ambition in not only its benchmark quality animation, that may seem overzealous but absolutely does this series reboot justice. The vibrancy, its new overworld and aesthetic, and a fresh dose in plot prolongs Sword Art’s legacy again.

Alicization is like revisiting old friends, and recapturing the magic the first two seasons displayed. An attitude adjustment within Kirito’s demeanour makes for an intriguing plot, one that was engaging from initiation. I was taken back by his lack of confidence, and how he was doubting himself halfway through the feature length premiere. How this translates for the teen’s premise throughout this season, is nothing short of a promising “redemption” story. Acquainting ourselves with Eugeo and Alice is quite interesting; it’s as if we’ve formed an established relationship with their characters and personality within minutes. It attributes to Sword Art’s writing and animation team, and how they have formed a fascinating setting and plot with a mixture of beloved characters that easily bond us emotionally.

The juxtaposition of Sword Art Online’s original premise to Alicization’s archaic timeline is surprising. Adapting a technological spin on days of yore with great detail, has me completely engrossed in how Kirito will handle events going forward. Recalling events that were conspired within the original VRMMORPG, the Nerve Gear trapped user’s of the biosensor’s enhanced capabilities. I’m uncertain whether this will play any part, or whether the plot will borrow certain elements from the initial season that places Kirito in similar predicament as this version of VR seems to be stimulated medicinally. It’s a cause for great concern however, and one I want to know more of.

There are unanswered questions about Alicization’s overall premise thus far, but I am certainly impressed with the narrative’s structure. And of course, I must say that the animation is next level. Sword Art Online had been widely respected for its acclaimed work in fluidity and design, however its latest entry takes it above and beyond anything presented beforehand. Its seamless animation, and rapid pacing flow with such grace on screen. It displays a washed overlay that appropriately brightens the overall atmosphere, with creative discourse between its characters that will make you fall in love with this awesome tale, all over again. Man, I love Sword Art Online and it’s great to see it back in such form. Alicization is an incredible chapter for this amazing franchise, and I would highly recommend it to any, and all Anime fans. 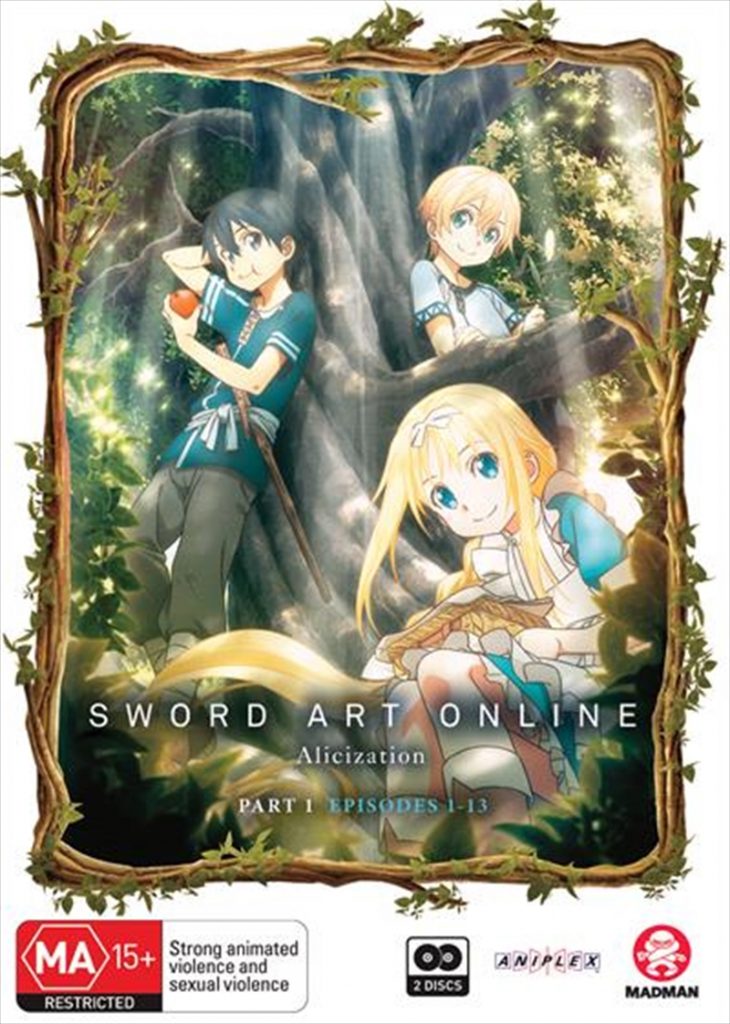 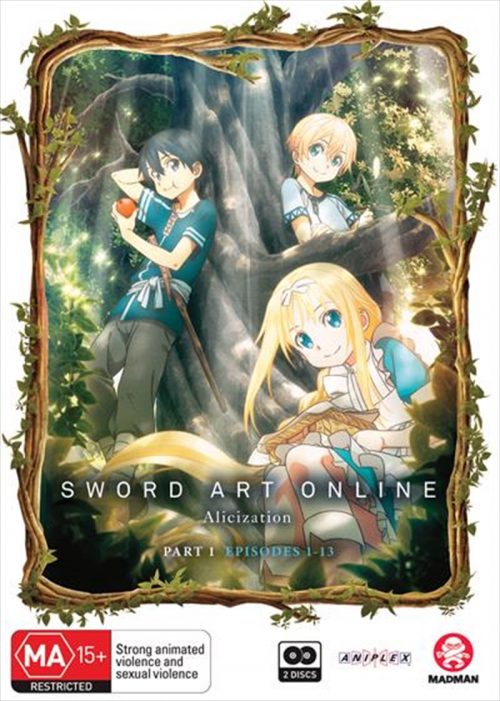