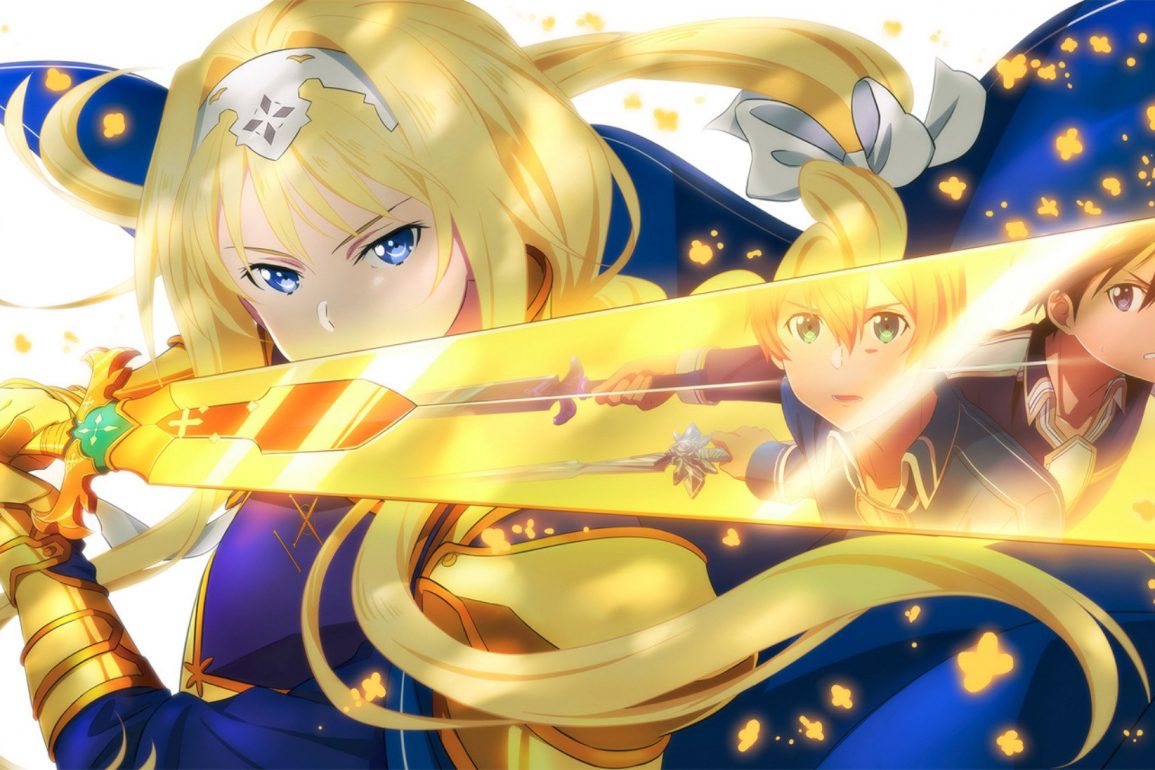 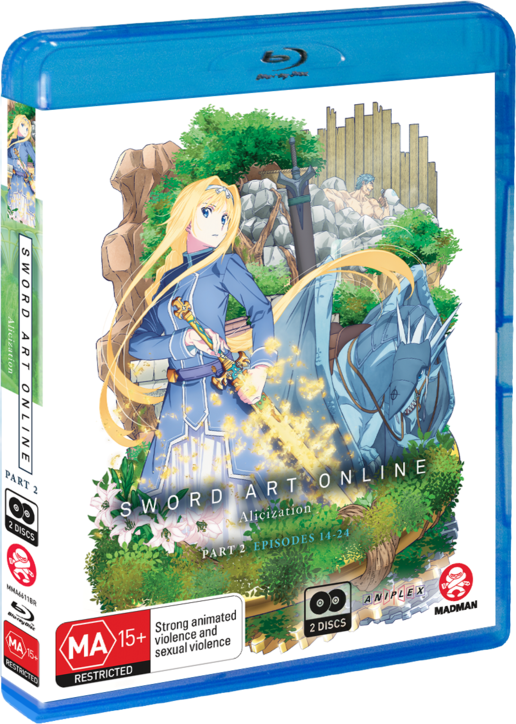 Earlier this year, we had the pleasure of covering Sword Art Online: Alicization Season One, Part One thanks to the kind folk over at Madman Entertainment. Now, with their follow-up release of Alicization Rising, we enter the next chapter in this epic saga. Sword Art Online: Alicization see’s the canonical follow-up from the initial animated series with the return of beloved characters from the franchise. If anything, Sword Art Online has proven itself limitless, with insane potential beyond its integral concept. Its boundless narrative allows the centric folklore to head anywhere within the matters of technology and VR acting as the ultimate escapade. The second chapter to this incredible season borrows subtle beats from Sword Art’s original series, with some wholesome moments that could be thrown in contention with the incredible action sequences at hand.

Splitting the season into segregated chapters help create a complexity for its overall narrative progression. It gives clarity for viewers that are of the notion that this is another arc within the Alicization chapter, and not a new season entirely. It’s a reprieve that keeps the core foundations of the animated series fresh, and heightens anticipation for its notable drama and high class action scenes. Sword Art Online is a leading industry standard in all facets of serialised Japanese animation, and they’ve proven it again with the Alicization Rising chapter. Unfolding the entire story from the first part of the series into plot points that ultimately see a timeskip within the universe, has potential for missing anecdotes that may prove somewhat key mysteries that are astonishingly crafted by series creators. This is the best season of the entire franchise, yet.

After defeating the Administrator with their new allies, Kirito and Eugeo return to the Cathedral in hopes of retrieving their weapons, not before being ambushed by Deusolbert, one of the highest ranking Integrity Knights that had been following the pair. The pair fend off the knight with their Swords, and defeat him only to realise that Deusolbert was in fact the exact same knight that arrested Alice for her trespassing the boundary of the Dark Territory, a little under a decade prior. After some interrogation, the duo come to find that the devious Administrator had wiped the knight’s memories before he made his attack. Admitting defeat to the two young teenagers, Deusolbert shows the pair his respect by warning them of the Cathedral’s 50th floor, where laying in wait are swarms of knight’s ordered to execute them on sight.

The pair consult each other before making plans in form of a covert strategy to take down the guards. On their way to the floor, they are confronted by two young twins. The sisters introduce themselves as Linel and Fizel, not before stabbing both Kirito and Eugeo and revealing themselves to be Integrity Knights in training. The siblings are tasked to bring the immobilised assailants to the 50th floor, where the commandor-in-chief Fanatio, awaits. Kirito plays possum and recovers quickly before attacking the swarms of knights surrounding both he and the impaired Eugeo. Kirito rushes towards the commander, and reveals his plan in protecting himself. Eugeo’s immobility wears off, and confronts the hoard by using Perfect Weapon Control Art to defeat them.

I love everything about this arc, and how it has been created to fit the mould of a one-stop adventure series, taking place within the confines of a cathedral.

Both Eugeo and Kirito defeat Fanatio, leaving the commander fatally wounded. With doubt lingering, Kirito decides to save Fanatio by using one of his daggers the Cardinal gifted him, despite plans to use the weapon to save Alice from the administrator. The pair bring the commander to the Cardinal, in which he entrusts her with both the youngster’s fleeing towards the 80th floor, where Alice anticipates their arrival. Eugeo conceals the dagger, while Kirito confronts the blonde beauty in battle. While the two engage in their struggle, the church’s integrity begins to disintegrate as the structure comes undone. A wall opens with the battling duo getting sucked through with Eugeo despondent in the circumstances unfolding.

Kirito and Alice agree to help each other, and eventually climb towards the top of the cathedral. Reluctant, Alice accompanies her former best friends with Kirito attempting to explain her true past and how the Administrator had brainwashed her at a young age to forget the life she had once known. As they ascend the church tower, minions that had masqueraded as statues come to life and fight both Alice and Kirito, while Eugeo is instructed to head further up the Cathedral stairs. Reaching floor 90, he encounters Bercouli, a founder of Rulid Village and former leader of the Integrity Knights. Eugeo attempts to thwart the Synthesis One’s potential plans, only to be trapped in ice using the Blue Rose Sword’s full memory release. Bercouli now holds Eugeo captive for both Kirito and Alice to save.

What a rush. This season has proved to be one of the greatest stories ever told within this illustrious franchise. From damsel to daring demigoddess, Alice is the star attraction of this arc, taking full reign over from Kirito’s heroics with her incredible charisma that shines through her strong resolve. It’s one of the more fascinating juxtapositions I’ve witness throughout this saga, where the traditional ‘hero saves the woman’ flips the script midway. Nuances of Sword Art’s blueprint are at the helm of this epic tale, overriding the former chapter’s known province in overall broadness, with an enclosed landscape within this towering cathedral. Certainly hearkens to Season one of Sword Art Online.

Kirito’s character progression throughout the entire series has seen some of the most growth in character development within the Shonen genre. It’s enthralling to witness an established character get challenged on new levels that would have thought improbable after Sword Art Online II. The introduction of new villains, most with their own goal in mind and an entire scheme set with unrest and mystery, it just makes everything about this season so engrossing. Each sequence is followed by captivating narrative follow-up that keeps you on your toes, I had a difficult time tearing myself away from the TV at 4AM finishing this season mainly due to its captivating plot. The best part? It’s not over yet. Alicization evolves through its originality and narrative flow, segregating the story into multiple part and placing extraordinary story beats throughout each chapter’s arc.

With Rising, the series delivers a fixed setting that shows a broad escapade demonstrating a revolving door like structure as each level of the tower presents something new, fresh and bold. The level of thought that helps each protagonist band as one in the end pushes our titular heroine, making way for the potential to see a spin-off dedicated to Alice and her misadventures. I’d love to know the story between the lost years, and how her character development suddenly transformed her into a total badass. We have so many great female hero’s in anime, but Alice may be my newfound favourite. Her confidence and crass shines as she shows her strengths in leading the group. There is a sense of compassion and resolve beneath her rough exterior that shows some of her former qualities, that had been eradicated by the Administrator.

While Kirito and Eugeo harbour the same characteristics of their respective natures, their character evolution from the onset of Part 1 has changed. Kirito shows more of a vengeful side, much like we saw in Sword Art Online II, while Eugeo exhibits apprehension and despair, but exudes confidence in his own motives. I love everything about this arc, and how it has been created to fit the mould of a one-stop adventure series, taking place within the confines of a cathedral. Remembering that Sword Art Online is Virtual Reality, this would be something that developers would essentially place within a JPRG. A dungeon-like mission to save ‘the princess’ from the evil clutches of a demonic villain. It’s textbook video gaming, and it’s demonstrated with great vigour. Sword Art Online: Alicization Part 2 is an essential, a must watch for all Sword Art fans. 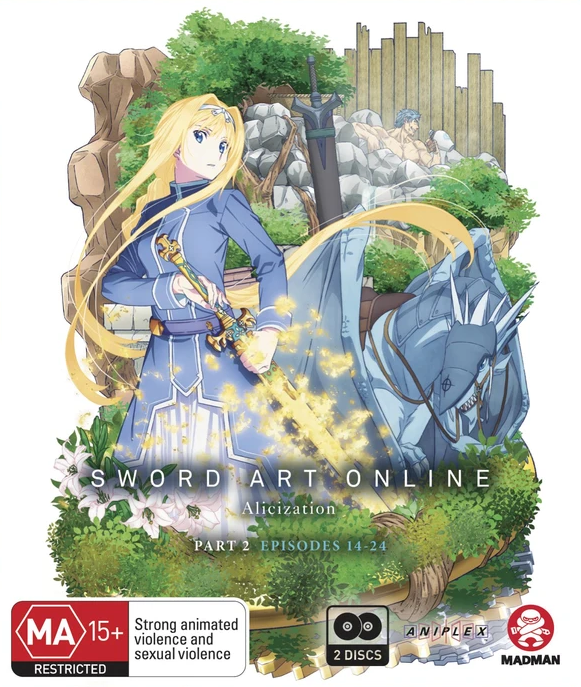 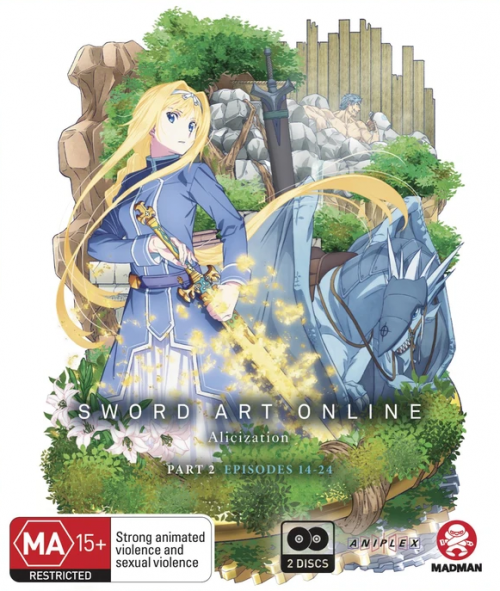