There’s only so much that could be said from revisiting this beloved arcade classic from the Nintendo Wii era. Super Monkey Ball: Banana Blitz was regarded as one of Wii’s greatest testing bed’s for it’s innovative use, and introduction of motion controls in gaming development. While there were still some criticisms towards the title’s excessive difficulty, it ultimately laid a foundation for many third party studios to follow en-suite with some incredibly fun releases of that generation. Skip ahead two generations, and We’re once again introduced to the title, with a resolution and partial graphical upgrade to suit our current line-up of consoles.

It’s questionable to release something that relied so heavily on it’s use of motion controls, especially when we have officially passed the now labeled “gimmick”. While the Nintendo Switch may still have use for the title, I was somewhat bemused by Super Monkey Ball: Banana Blitz’s release on the PlayStation 4, XBOX One, and PC. Of course, you could purchase peripherals to enjoy it’s title as intended, however this is also limited by controllers that are available for said platforms. While PlayStation now market their “PS Move” controllers specifically for their PSVR units, and PC can easily sync an old Wii controller with use of a bluetooth adapter, XBOX One is left in the dark with no adaptable controllers to use any of the motion capabilities, the title presents.

With that said, playing the title on the PlayStation 4 was a questionable decision. I honestly did have a hard time appreciating the title with the use of a standard controller. Using the left analogue stick to control your selected character, entrapped inside a ball, you will make your way through multiple puzzles, mazes, and maps to reach it’s goal collecting as many banana’s as you can, along the way. While some of the mechanics do feel polished from it’s original counterpart, it has to be said that the camera controls on this were non-existent.

As you steer the ball through the map, the camera also steers with your direction intended, making for some sea-sick moments. I was certainly going cross-eyed at some points trying to follow what was happening on screen, and with no motion controls being used made it difficult to see the fun in it. As mentioned above, the use of motion controls would have been a benefit seen here, but it was confirmed earlier this year, that the development team had no intentions of including motion controls at all here, which means I was stuck with what I had.

The title’s graphical upgrade certainly enriches the experience, and boldly displays the game in a unique light. While we may have seen some remasters come back from the last generation, truly appreciating the fact that this was developed for the Nintendo Wii, made this somewhat a nostalgic moment for myself to experience. As I played, I recalled many moments of laughs with family and friends, all the way back to the Wii’s launch period in 2006. It was also neat to try out a few of the new modes introduced here, such as Decathlon mode where you will be challenged against 10 new mini-games and Time Attack mode with online leader boards.

One minor change noticed here was the original soundtrack was completely absent from the title. While I would say that the soundtrack was something to note here, unfortunately it becomes repetitive and almost tone deaf, which is quite a shame. One thing I will say, is the UI is clean. Almost too clean for a Super Monkey Ball title. Ditching the “kiddy” vibe, I have to admit, I fell in love with it’s GUI presentation almost immediately.

Boss battles are back, and can be a mixed bag. While I did have fun with a few battles, trying my best to understand how to conquer and thwart each villain that I encountered, it was hard to process what was happening on-screen with the shonky camera. I loved the initial concept of having the best of the best return for the title, “cutting the fat” in some regard, having the top 10 maps, rather than all 50 mini-games return. Probably the best decision made here.

While the title may not be as polished as some party titles that are regularly available to gamer’s who love to get their friends around a TV screen, and have a good ol’ laugh at how miserable their gaming techniques are, Super Monkey Ball: Banana Blitz HD still presents something that money can not buy, nostalgia. Going back over a decade to revisit the title, was a treat. While it’s nothing that’s absolutely perfect, the game will still have you and your friends giggling at each other, and challenging one another.

While a solo player experience was never quite the intention here, Super Monkey Ball: Banana Blitz most certainly could be tried in this situation. I would implore Ryu Ga Gotoku Studio and SEGA to reconsider patching in motion controls for the title, to give gamer’s it’s respected experience that we all came to love on the Nintendo Wii, as it’s current bearings lack any posture to prop itself perfectly within the party gaming market. While I somewhat enjoyed the title, Super Monkey Ball: Banana Blitz HD is worth checking out, purely for it’s nostalgia factor. 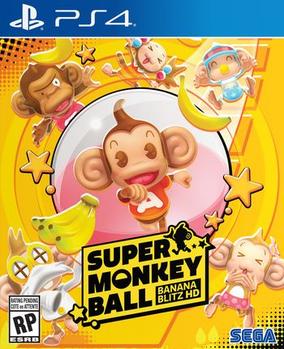