Spider-Man Far From Home boasts an enjoyable, relatable and authentic action superhero experience but fails to meet the high standard and expectations set by it’s predecessor Spider-Man Homecoming and Avengers Endgame. Comedy, great action set pieces, and likable characters is what we have come to expect from the films by Marvel Studios, and Far From Home strongly embraces that. However, the film is held back by an overly predictable story, average (at best) CGI and mediocre writing.

Marvel had a difficult job on their hands post Avengers Endgame in creating the final film of phase 3 and the first film post endgame, and I’m glad to say that the consequences and experiences set in Endgame, were well executed in Spider-Man Far from Home. Peter Parker (played by Tom Holland) is struggling to cope with the loss of Tony Stark and seeks to live a normal teenage life to help him move on from the trauma set in Avengers Endgame. Europe school trip bound with his fellow friends, Peter Parker hopes to move past his superhero life and peruse his love interest Mary Jane (played by Zendaya). Looking to live the teenage life, Peter soon encounters an unfamiliar and unpredictable threat in Mysterio, in which Peter struggles to balance his identity as Spider-Man and Peter Parker.

Great voice acting, stunt training and charismatic persona, Tom Holland once again creates a great performance as both the web slinger Spider-Man and Peter Parker. It’s great to see the actor develop throughout the projects of the marvel cinematic universe to who I now believe is the fully fleshed Spiderman that comic fans deserve. The strongest aspect of Spider-Man Far From Home is the Villain, and that is not something we hear often from much of the modern-day super-hero genre. Jake Gyllenhaal’s brilliant (as expected) performance of Mysterio, adds a layer of unpredictability to the plot. Furthermore, the interaction between Peter Parker and Quentin Beck added the emotional weight to the film, as Peter looked to the opposing character as hope to living a normal life. Adding to that, the action set pieces were evidently better throughout the film in comparison to Homecoming, larger scaled and intelligently put together. The action sequences between Spiderman and Mysterio were crafted to perfection, creating a tense atmosphere and posing a dangerous threat to Spiderman. The use of lighting in the action sequences added to the beauty of the set pieces, creating a dark atmosphere, putting Spidey in a situation in which we haven’t seen before.

The character chemistry and love story of Peter Parker and Mary Jane (MJ) was an aspect of the film that I thoroughly enjoyed. The variant to MJ’s character direction was surprisingly interesting and relatable. Mary Jane constantly puts on a front of being an outcast that couldn’t care less of the opinions of others, however deep down she is extremely vulnerable, adding depth to the character and this is further exemplified in the film. Peter and MJ’s relationship is awkward yet relatable, funny but emotional and this direction works well throughout the film.

However, the film struggles throughout in telling an original story. Spider-Man Far From Home feels like a film I have seen many times before, not only as a superhero film but a generic teen comedy. Jake Gyllenhaal’s fantastic performance couldn’t save the film from falling flat in terms of its originality. This falls to the pacing of the film which was inconsonant throughout. I would have loved to see more of Mysterio’s character arc, however the film focused far to long in the first two acts in telling a teen-comedy story, instead of focusing on the development of its stronger characters, Mysterio and the threat to Spider-Man. Furthermore, it was a struggle to watch the overbearingness of Tony Stark’s character in Far From Home. The film focused far to heavily on Peter filling Tony’s shoes and forgets to remember that Peter Parker and Spider-Man carry their own identity. The emotional weight of the death of Tony Stark needed to be in the film, however by the end it became overbearing.

Adding to this, the writing throughout the film had its strong moments but also fell flat with clunky humour and generic superhero lines. Mysterio’s plan to take down Spider-Man felt fabricated and forced, struggling to advance the story between Mysterio’s plan and the reason Spider-Man is involved. Coming from Avengers Infinity War and Endgame, the computer-generated imagery (CGI) was evidently inferior in Far From Home (yes the budget was lower), but the CGI throughout the film was mediocre to poor. The visual team struggled (especially in action sequences) in producing a model of Spiderman that looks authentic and fits into the world their creating.

Spider-Man Far From Home is another success for the Marvel Cinematic Universe. Tom Holland’s likeable and heart-warming portrayal of Peter Parker and Spiderman are back, in this relatable tale of a young boy trying to live the normal teenage life. The film boasts strong performances by both Holland and Gyllenhaal and adds larger scaled action set-pieces which will leave the average viewer and comic book fans at the edge of their seats. However, a predictable story, mediocre writing and poor computer-generated imagery, holds Spider-Man Far From Home back from being something truly great. It would have been good to see Marvel stray away from their comfort zone, take more risks and create a superhero film to remember. All in all, Spider-Man Far From Home is still an enjoyable watch and I would recommend going to see it this holiday season. 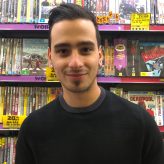