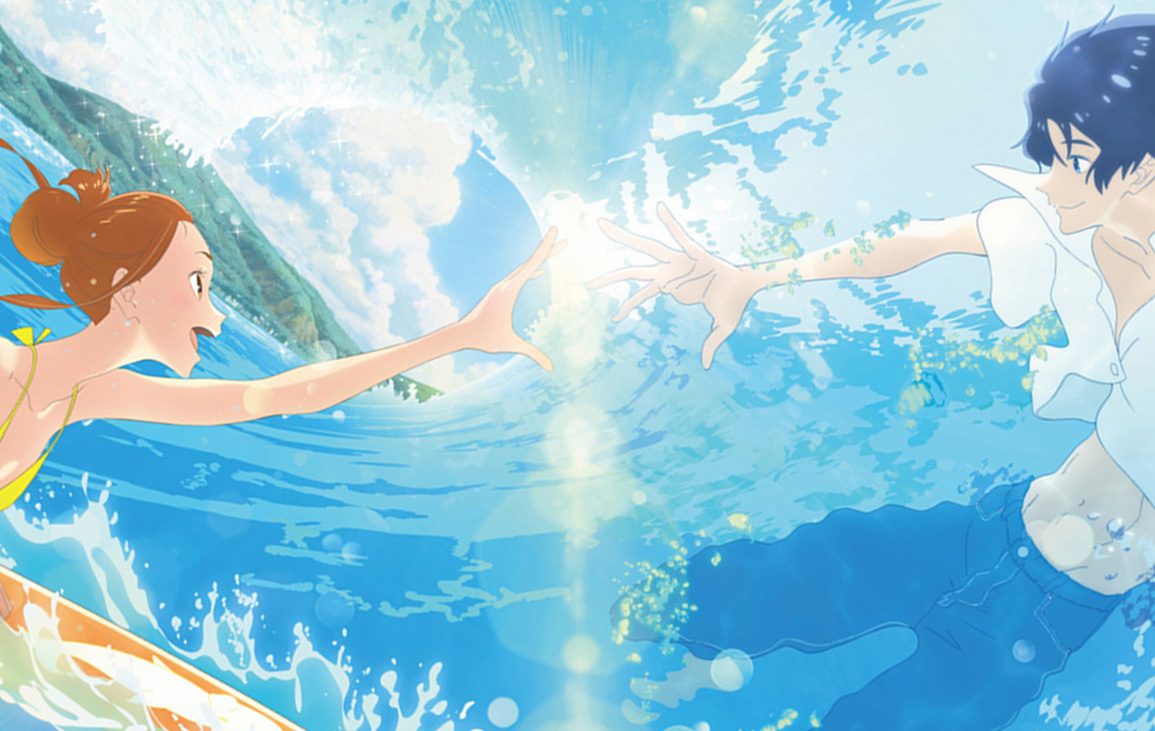 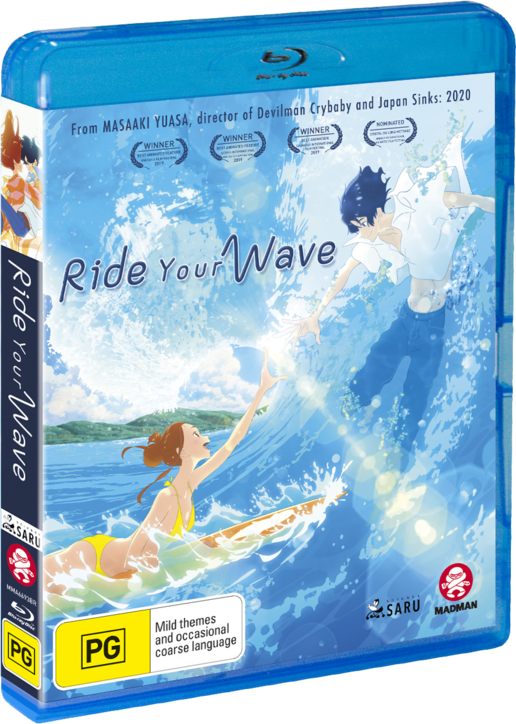 I wasn’t prepared for this. What I expected from Masaaki Yuasa’s Ride Your Wave, was a comical Slice of life, feel good movie that sets it apart from the plethora of emotionally charged Japanese Animated feature length films that we’ve been handed. Boy should I have done my homework first. While the film hits notes of the aforementioned genre, its overall bearings bring forth a fantasy tale, enveloped in hope, but also letting go of the past. It touches on a variety of emotions, and sensitive subjects that can be somewhat provoking, almost overwhelming at times, but it’s full of charm and heart, and that’s what matters here. Scoping the artstyle, I was immediately drawn into its vibrancy and unique animation that exhibits a certain magic towards its intent. I’m still processing my thoughts while writing this review, as I feel that I’ve come away loving this, but feel conflicted by its resolve.

Announced at the Tokyo International Festival in 2018, Yuasa known for directorial work in Devilman Crybaby announced that he would be leading the team behind this stunning feature, with Reiko Yoshida (A Silent Voice, Violet Evergarden) appointed as head screenwriter. The film was an original working between the pair, but would emphasise an amalgamation of their previous styles in a simple romance story with subtle comedic nuances that contrast its devastating premise. Yuasa’s intent was to depict life as “Riding a wave”, risking it all for the thrills as you never know what tomorrow may bring. Heightening its incomparable narrative, Award winning composer Michiru Oshima (The Legend of Zelda: Twilight Princess, Bloom into You), curated and amazing compilation that accompanied the tale with such emotion. Ride Your Wave had the distinct honour of being featured at the Annecy International Animation Film Festival in France, premiering on June 10, 2019.

The film was slated for release June 21, 2019 in Japan, and a Chinese release August 7, 2019 however was cancelled due to the COVID-19 epidemic. Localisation for the film wrapped a month prior before the World Health Organisation re-categorised the untimely disease as a pandemic, allowing the animated movie to only launch via digital platforms in various countries during the year.

Ride Your Wave is available to order from Madman Entertainment.

The film opens with our featured female character Hinako Mukaimizu, a 19-year-old who uproots to a small oceanside town in hopes of studying at the local college, but her true ambitions lie within her hobby, surfing. Unsure about her future, the teen whimsically carries on through life without a care in the world. Her absent apartment is littered with boxes that she’s yet to unpack due to her care-free nature. Fresh faced to the locals, she’s already earned a well received reputation for spending many hours traversing the many streets of the quiet suburb, but loves to devote most of her spare time on the coastline. Lost one day within the town, she rides her bicycle past a young firefighter-in training Wasabi Kawamura, requesting directions to her apartment building. The friendly fiery gazes upon Hinako’s natural beauty but is directed by his superior to snap out of it.

The two promise to catch up for coffee after she settles in. Later that evening, a sleeping Hinako is suddenly awoken by the apartment building’s fire alarm blaring throughout the hallow halls. With the entire complex ablaze, she makes haste towards her door, only to rush back to grab her surfboard, not before leaving. Only a moment too late, she misses the elevator that is already packed with patrons that live within the building. Fleeing towards the fire escape, she has no choice but to head for the roof as the stairs below were an imposing inferno crawling its way upwards. Gasping for air, the young lady howls from atop the high-rise attracting the attention of the sprawling emergency service people. The captain of the squad directs Wasabi to the roof of the building, where fireworks are continuing to stoke the charred building. Shielding herself with her trusty surfboard, a looming figure comes from out of the shadows to save the young woman.

The most emotionally charged film I've witnessed since 'A Silent Voice'

Wasabi’s superior Minato Hinageshi rides a cherry picker to the roof, saving the young woman with Wasabi and the captain looking on. After the young 21-year-old fiery saves the distressed Hinako, she asks if he likes to surf, and would love to teach him sometime. Drawn to her charisma, the two begin to bond over their passion of surfing, leading to the pair becoming a couple. After months of dating, the two have a confronting conversation over their relationship, and where they think it’s leading. Minato promises to always be by Hinako’s side, no matter what. The couple commit to their love by moving in together for what would be presumed for the rest of their lives. Continuing their hobby of surfing together, Hinako tells Minato that the best time for surfing is during a winter storm, as the wind produces the best waves to ride.

Intrigued, the young firefighter goes surfing with friends, expecting Hinako to catch up with him and the gang later on. Continuing her routine of riding into the coastline, Hinako’s smile turns to immediate dread as she views a flurry of emergency services parked along shore. Not entirely grasping what had happened as of yet, she rides in and spots Hinato’s trademark whale branded surfboard split into two. Minato had drowned. Wasabi runs towards an inconsolable Hinako who passes out from shock. Minato’s little sister delivers a box filled with many of her brother’s belonging’s including his cell phone, and an inflatable dolphin the pair had purchased together. Distraught by her late partner’s absence, she begins to hum the song “Brand New Story” in which the pair had sang on their first date. Upon singing the melody, her glassed water begins to bubble almost bringing it to life.

So yes, this is heavy. The most emotionally charged film I’ve witnessed since ‘A Silent Voice’, and how apropos that this astonishing narrative was penned by the exact same lead screenwriter. Ride Your Wave immediately held promise, from Yuasa’s involvement from its early production phase. The director delivered an abstract in the Netflix original Devilman Crybaby, that has yet to be matched in terms of its dedicated genre. The juxtaposition totally lies in that series being a depiction of such a trip, but this romedy/drama shows fantasy in such a touching light that exudes charm. I knew that I was in for something special seeing the magnificence within its sleek animation, and beautiful environments. There’s something about Anime being able to depict flowing environmental with natural capabilities. It’s astounding, if anything magical and this film demonstrates it based purely on its premise alone. Really, it has to; It’s a key focal point of the entire presentation.

Merit Leighton and Joey Richter both portray our main characters respectively, with such charisma. I was so encapsulated by their appealing disposition, that at one point I forgot that I was watching an animated movie. For a film of such magnitude, casting two newcomers to the scene was totally fortuitous. I was of the expectation that the film may have enlisted someone of the likes of Erika Harlacher, or Laura Post, but Leighton’s range shined, ultimately setting Hinako’s personality as the entire feature’s resolve. Her ability to captivate viewers with the character’s charisma, finding peace amongst the pandemonium, the struggles of closure and mental well-being are highlighted here and it’s all due to this wonderful cast,and their vocal backings that make it a gold standard.

The film itself delivers a circle-of-life nuance that details how everything that’s important to a person may disappear in the blink of an eye. There’s only three things we’re guaranteed in life; you’re born, you live, you die. Was this film designed as an attack on emotion? On personality? On human nature itself? Yes, in every sense of the aforementioned labels. It’s thought provoking in everyway, challenging your own feelings towards connection, love, mourning, healing, resolve and closure. Every facet is given it’s own arc within this narrative. Some quirk in-between to break the monotony and gloom, with comical relief that was appreciated and landed on every beat. Never once did I feel out of place watching the film. It had be glued to my screen from beginning to end. Ride Your Wave is an emotional trip, an absolute journey through every state of mind imaginable, and a story I’ll be dissecting for years to come. 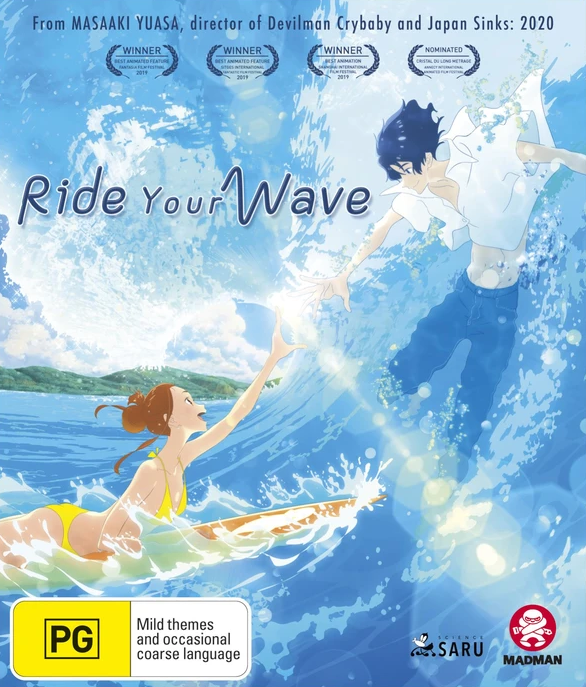 19-year-old Hinako Mukaimizu moves to an oceanside town to attend college and indulge in her hobby, surfing, without much thought to her future. When her new apartment catches on fire from fireworks, she is rescued by Minato Hinageshi, a 21-year-old firefighter with a strong sense of justice. Hinako is drawn to his capable personality, and they bond when he begins learning how to surf. As the two spend time together, they fall in love. However, after Hinako tells Minato that waves are the best to surf in during the winter storm, he goes surfing during the storm and drowns while rescuing a jetskiier. 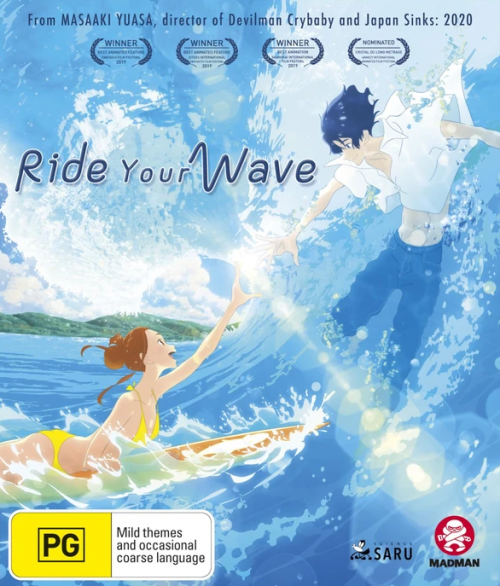