Enemies can swarm areas in droves

Sound effects are too repetitive

When it comes to Double Fine Productions, you will find no greater titles than their critically acclaimed smash hits Psychonauts, and Brutal Legend. Honestly, It has been quite some time since I have personally sat down and played a game from the studio, due to it’s niche appeal struggling to grasp my undivided attention. I will admit, the studio does have it’s finger on the pulse and does a fantastic job at keeping it’s ideas unique and fresh, rather than going back to the well, and debasing it’s quality due to a winning formula that is seen in many independent development teams. I was glad to see Double Fine highlighted as one of the leading Indie Studios this year at E3, announcing they had been acquired by XBOX Game Studios, to develop and produce titles for XBOX and other platforms in the near future. While it is sad that some titles will be exclusive to the Microsoft branded console, this is a great opportunity for the studio to grow and show off it’s incredible creativity in a new light, and to a different audience. Studio CEO, Tim Schafer has stated that Double Fine aims to think differently when developing a number of titles, and does not to stray away from any unique ideas that they may come across, and when it comes to RAD, they may have another hit on their hands due it’s outlandish nature in revisiting the 80’s in an post-apocalyptic light.

While not story intense, RAD’s premise follows a cataclysmic, twice in a lifetime catastrophe that has set the world into utter turmoil. Desolate, earth has spun itself into a neo-80’s inspired mess, littered with gaming and pop-culture references, with it’s only survivors living a care-free lifestyle, building up their reputation to be totally “rad”, rather than caring for humankind’s extinction. That’s a bizarre premise if I’ve ever seen one, but none-the-less, it had me intrigued as to why they cared for their self centered ego-centric personalities, rather than restoring life on earth and saving the world from total destruction. Of course, the old saying that “we humans will destroy our own kind, and our planet first” comes to mind here, but I digress. You begin by choosing your protagonist, and the aim here is to keep your “radness” alive, making sure your colony does not lose it’s power. It is at this point, a “Stranger Things” state of events take place, with a nameless leader, wielding their mighty key-tar, tries to convince a group of roguelike teenagers to set fourth into the Fallow, a radioactive wasteland, and reactivate obsolete technology to try and revive humanity. Confused? Yes, I was.

I will tell you, the story is definitely the weakest part of this game. It would be fair to say that I didn’t care for it. While still an interesting setup that leads into some fun gameplay, I had a hard time keeping track of why I was exactly pursuing some missions. While I respect and understand wanting to have a bizarre plot connect with the antagonistic beings that roguelikes may be, I’m one for a clearer and concise plot to determine my connection towards the cast of characters that are presented to me. However, am I really supposed to feel that way with this game? I don’t think so. I think we’re actually supposed to feel nothing for these characters, much like they feel nothing for their surroundings. It’s a weird disposition in story-telling, but one I do find can either connect strongly with it’s audience, or fall flat. While usually I would call it a day on a game with a confusing premise, I respected it’s restrictive nature in style. I wasn’t exactly playing a Triple-A, action-adventure title for it’s cinematic value’s. I’m playing an indie title for it’s awesome style of gameplay and amazing presentation. And yes, the gameplay is awesome.

In fashion and tribute to it’s 80’s nostalgia, imagine a simple arcade style of play. You begin with your character wielding a baseball bat with a one-button mashing technique and three-hit combo chain attack, quite reminiscent of a hack n’ slash style genre, which allows you to smack your enemies into oblivion by standing, running, or attempting a stylish aerial attack. By obliterating enemies, you will gain experience points that will help you raise your level, unlocking new special abilities that are in form of nuclear mutation. Weird, but cool hey? While each attack generated will give off devastating effects, they will be limited and will in-turn place short cool down periods. Different mutations will garner various forms of attack, depending on what kind of mutation grows within your character. Growing a cobra head will lead a mid-range attack that will deal a long-lasting effect towards certain enemies that can also mutate foes to your advantage, turning them into turrets that will help you destroy any oncoming surroundings while trying to defeat stronger enemies, and garner more XP. Depending on situations, some mutations will play better than others, but will each find their place throughout your time in Fallow.

Admittedly, one thing that threw me off was the game’s difficulty spikes. The title requires you to gain experience and level up as quick as possible. Enemies will approach you through leaps and bounds, and will do their best to attack you, so be sure to set fourth with steady caution. Be sure that your proficiency becomes key while playing, or else you will be set for a frustrating experience. While RAD does implore a carelessness, it does impose a precise and direct way to play. Experienced D&D players would get a hell of kick from it’s imaginative and familiar pacing. There will be surprises around every corner that will have players either ready for attack, or heading for the hills to safer ground. There are times where this can be quite overwhelming, where there may be too happening on-screen to keep up with, this is why XP is implored for players to gain as fast as possible, to garner these mutations for any advantage possible. While some may see this style as convoluted, there is a formula to this madness that makes the gameplay masochistic.

The design and presentation paired well playing on the PlayStation 4 Pro. While I would recommend a title like this on the Nintendo Switch, RAD played buttery smooth at 60fps with no technical hiccups or issues, which made it’s incredible design astonishingly desirable. Gracing RAD’s simplistic approach delivers a vibrant terrain, that will have players gobsmacked at how awesome it really is. There is an appreciation to detail shown, with it’s connection to retrowave, pop-culture, and 80’s synth beats. It’s jam-packed with easter eggs that had me wide-eyed reminiscing days of old. Hell, I was elated by the theme song from arcade and Nintendo classic, Mappy playing right as the game began. A game I hold near and dear to my heart. That’s a callback for true fans right there. The boastful tones of the game’s announcer set’s the pace for the title’s desolate and post apocalyptic environment so well. Hearing the announcer read your highlighted option through the game’s UI is an awesome touch.

I’m happy with what I experience with RAD. While initially confused by the story’s plot and premise, I enjoyed the game for what it was. An amazing button masher, that looks to challenge all comers to enjoy a mindless experience, while challenging your concentration with a unique style of presentation. While post-apocalyptic settings are nothing unique in gaming, there is something rare about the way RAD presents itself. It may be it’s top-down style approach that leads a widespread of mutant rogue’s to attack you from every corner, but ultimately leads to you smashing every suspect into the atmosphere with style, while rockin’ it out to some sweet synth tunes. The potential risks in the game meet a grander reward awaiting you near the end of your journey to save humanity from potential extinction. While every turn could spell disaster for you and your character, it’s all part of the fun here. I can definitely say that RAD, is RAD. 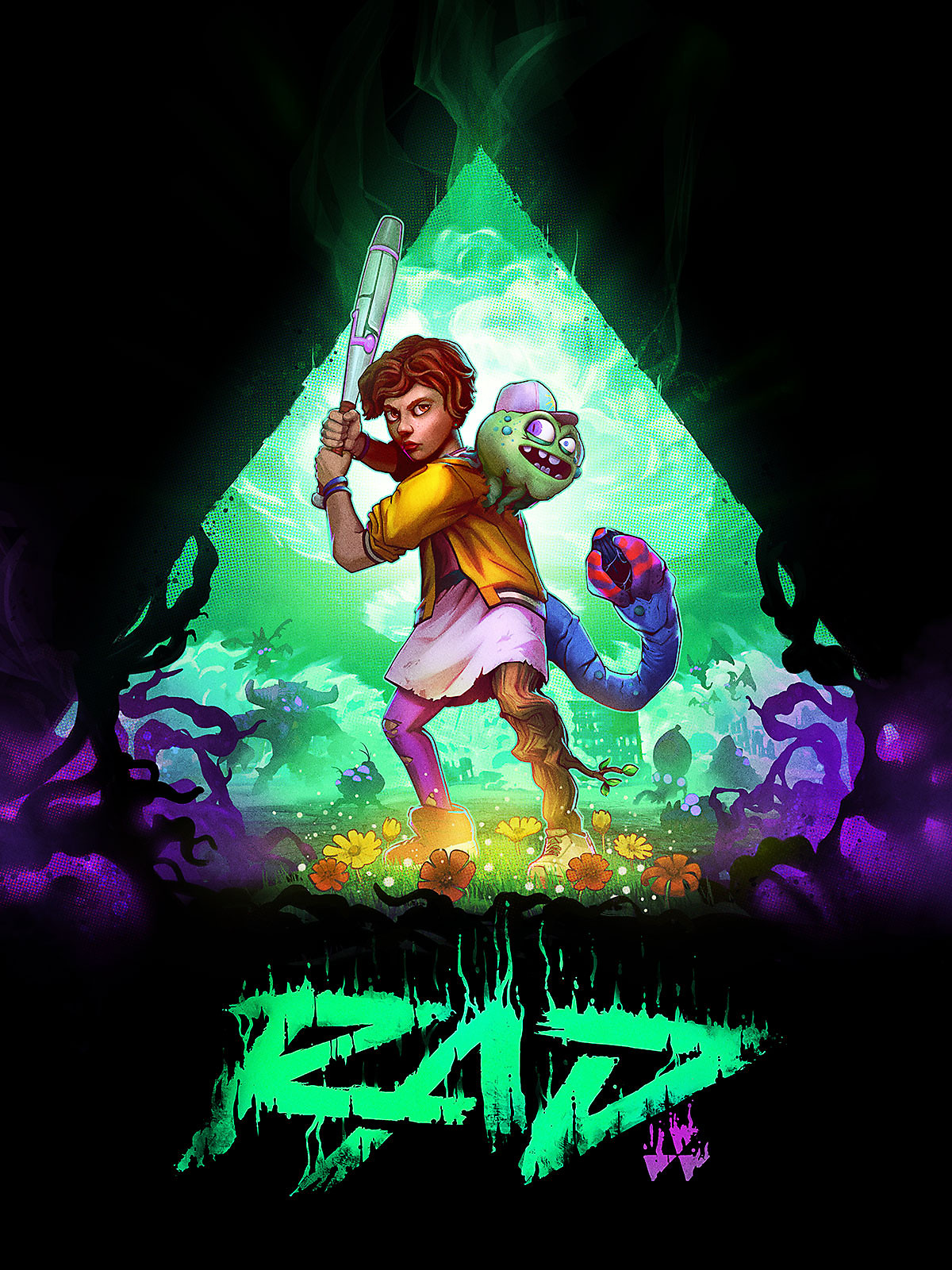 Rad is a roguelike video game developed by Double Fine and published by Bandai Namco Entertainment. It was released for Microsoft Windows, Nintendo Switch, PlayStation 4 and Xbox One on August 20, 2019.