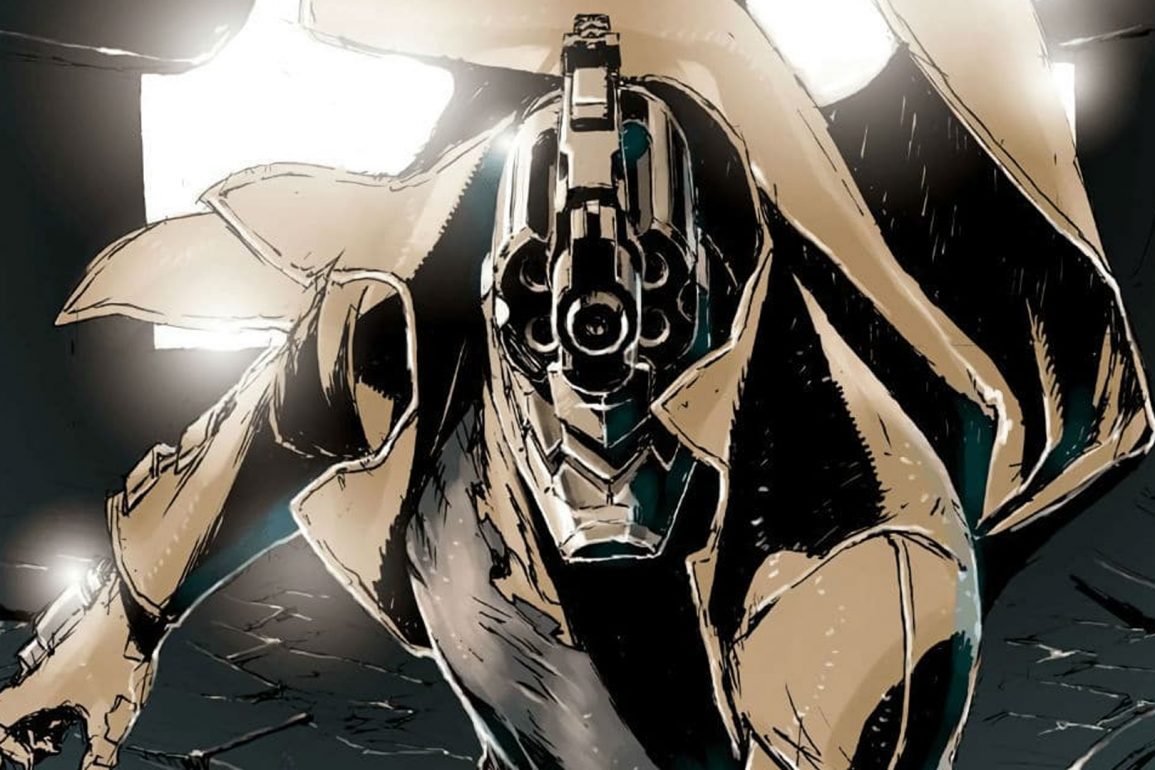 I have to admit, No Guns Life was an intriguing find. I first stumbled upon its Cyberpunk setting five years ago, reading through the first few chapters of the Seinen’s serialisation. I was mesmerised by its stunning imagery, and its unique portrayal on an action filled cybernetic post-war story. Delivering a strange take on war heroes gone rogue, the Manga has garnered some commercial success within Japan, however gained momentum when Madhouse (One Punch Man, No Game No Life) were appointed to release the Japanese Animated adaptation, with Director Naoyuki Itō (Overlord) taking the lead. There’s no doubt there were major plans for this franchise and its hopes of boosting its popularity, but it seemed that it needed a necessary kick to get the international audience noticing its uncommon themes.

Announced in the March 2019 Issue of Ultra Jump Magazine, the series would be backed by Egg Firm, with Yukie Sugawara handling composition, and Masanori Shino translating characters from their Manga to Animated form. The series began to take aim at a different group of animators and designers, with Unreal Engine 4 implemented in overall background and terrain sculpture. With the industry standard 12 episodes commissioned, the series was a critical success in its international debut. Running from October to December 2019, No Guns Life was ranked the 4th most watched Anime of the Winter season, and was fast-tracked for renewal the following year. Season 2 originally slated for April 9, 2020 was delayed due to the ongoing COVID-19 pandemic, but is now simulcasting on AnimeLab. The entire first season is available in Sub and Dub.

For the unacquainted, No Guns Life follows Juuzou Inui, a genetically enhanced cyborg ex-militant transformed after the great war to survive his critical injuries. A renowned “amnesiac”, Inui’s trademark feature is his giant revolver in place of his cranium which functions as both a weapon and his head. With no memory of his previous life, he is labeled an “Extend”; the cybernetic species who were modified into deadly weapons. Regarded a chain smoker, he does his best in keeping his body protected from any moisture as his parts could easily rust, deeming them defunct and irreparable. Inui works as a “Resolver”, a private investigator that looks to not only sought out culprits but eliminate them in the process. While it may have been safe to assume that the militant could self-utilise his threatening feature by simply firing it, he in fact needs the assistance of a third party in initiating its use.

While smoking may be regarded a bad habit, his cigarette’s are formulated to cater his nerve damage sustained during the war. He lives by a simple decree of cleaning your mess without relying on others; “wipe your own ass”, I love it. In its inaugural season, Inui is tasked with helping a fellow Extend after he is accused of kidnapping his son, Tetsuro Arahabaki. After pleading for his son’s safety, Juuzou reluctantly accepts the job and proceeds to lead the boy to safety. The two hightail through the city but are confronted by an inconspicuous nun that riddles the detective with suspicion. After questioning the nun, she reveals herself to be Karen, a notorious Extend agent employed by the Beruhren Corporation, tasked with retrieving Tetsuro. Inui comes to the realisation that not only are major corporations behind the matter but are tied to the town’s mafia, leading to major twists and turns behind corruption, conglomeration and conspiracy.

After a lethal confrontation, the renegade Extend appears and defends Inui and his son. Fatally wounded by Karen, she blasts the renegade with her shotgun right before she attacks Inui, retrieving Tetsuro then fleeing. After surviving the onslaught, Inui thanks the renegade in which he reveals to the detective that he is an empty shell that is controlled by “Harmony”, a remote control device implanted within the Extend by Tetsuro. With Inui in tow, Karen boards a train packed with security that surrounds her with the boy held captive. Inui blasts through the carriage annihilating all Beruhren Guards, saving Testuro, and destroying the corrupt cyborg. The incident is reported on the city’s news network with the blame placed on the Spitzebergen terrorist group. A bounty is put on Tetsuro, with reports falsifying his kidnapping and labeling the boy the offspring of Beruhren CEO Soichiro Arahabaki.

Finding the entire narrative hard to believe, Inui accompanies Tetsuro to Mary Steinberg, a black market mechanic to all Extends. After sustaining injuries, Tetsuro is given some basic extensions to repair his body, but won’t be able to utilise any of his newfound capabilities unless he recovers. The trio are hunted down by a Buruhren representative known as Cunningham. The sleezy rep tries his best to coerce Juuzou in giving up Tetsuro in return for a pack of his favourite brand of cigarettes. However, with Mary’s kinship the duo obliterate Cunningham’s back-up forcing him to vanish. As Mary helps a weakened Inui back to her workshop, Tetsuro regains conciousness.

I’ve never really been so encapsulated by such abstract. The abnormalities of our protagonist and the Extends through this dark and dreary setting truly connect with the series overall tone. No Guns Life narrative sets a  precipitate of an impending war between good and evil. The distinction of where the two notions lie, is truly intriguing. With the city’s leaders connected to the crooked and corrupt, it does really make for an alluring tale. The series’ compelling characters elevate every scene with their beguiling vendetta’s and personal quests for redemption, all the while you follow the lead with his own pursuit in just living his life, and finishing the job. Admittedly, there are some comedic moments within this dark tale that do a great job breaking the monotony of a continuous Noire-like potboiler.

The mix between extends and humans are quite an interesting sub-plot that has yet to be addressed, but am curious to see whether we are introduced to descendants of the cyborgs. Supposedly with one already apparent, we may very well see this plot-chain continue and could lead to the story’s climax. The entire series aesthetic of a dreary cyberpunk backdrop translates itself with an interesting ambience that certainly sets the tone for what is being told. The incredibly designed sights and surroundings that are accompanied by some awesome action sequences with some of the smoothest animation seen this year; it’s most definitely a delightful display. I won’t lie, the first two episodes are a little convoluted however, don’t let this disparage you from continuing this action-packed epic.

I compare the series overall design to a modernised Akira. The legacy attached to the 1991 Japanese Animated Feature, has truly inspired many an anime, and you could certainly see the connections made here. There’s a charismatic charm carried by our ensemble cast within this audacious series, and is establishing a solid estate in its own right. Viewing the first couple of episodes in both Japanese and English, I can say that I enjoyed both the original and localised portrayal of Juuzou. Chris Ryan’s range is unquestionably profound, with the ability to change Inui from deep, dark and mysterious to a comically bewildered buffoon. With an array of quirks and characteristics attached to our ex-militant mammoth, he sure does make for an interesting protagonist. No Guns Life is assured to be an incredible deep dive, and one I’m excited to continue. 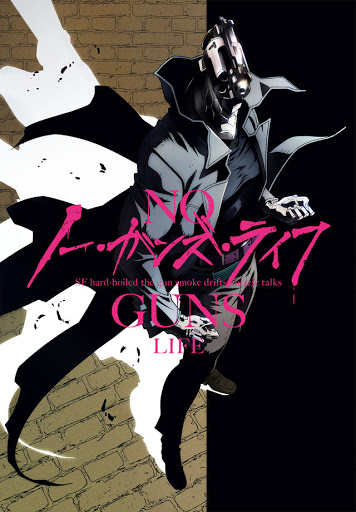 No Guns Life (ノー・ガンズ・ライフ, Nō Ganzu Raifu) is a Japanese manga series by Tasuku Karasuma and has been published in Shueisha’s seinen manga magazine Ultra Jump since August 2014. An anime television series adaptation by Madhouse aired from October 10 to December 26, 2019. The first season was a split-cour anime, with the second half being scheduled for April 2020, before being delayed to July 9, 2020 due to the COVID-19 pandemic. 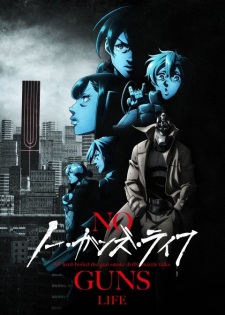 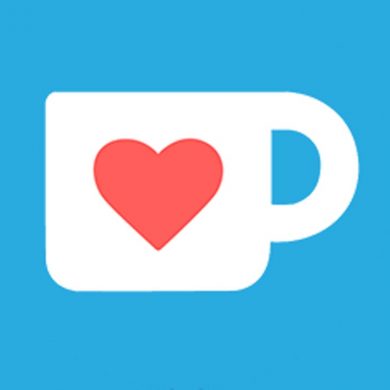