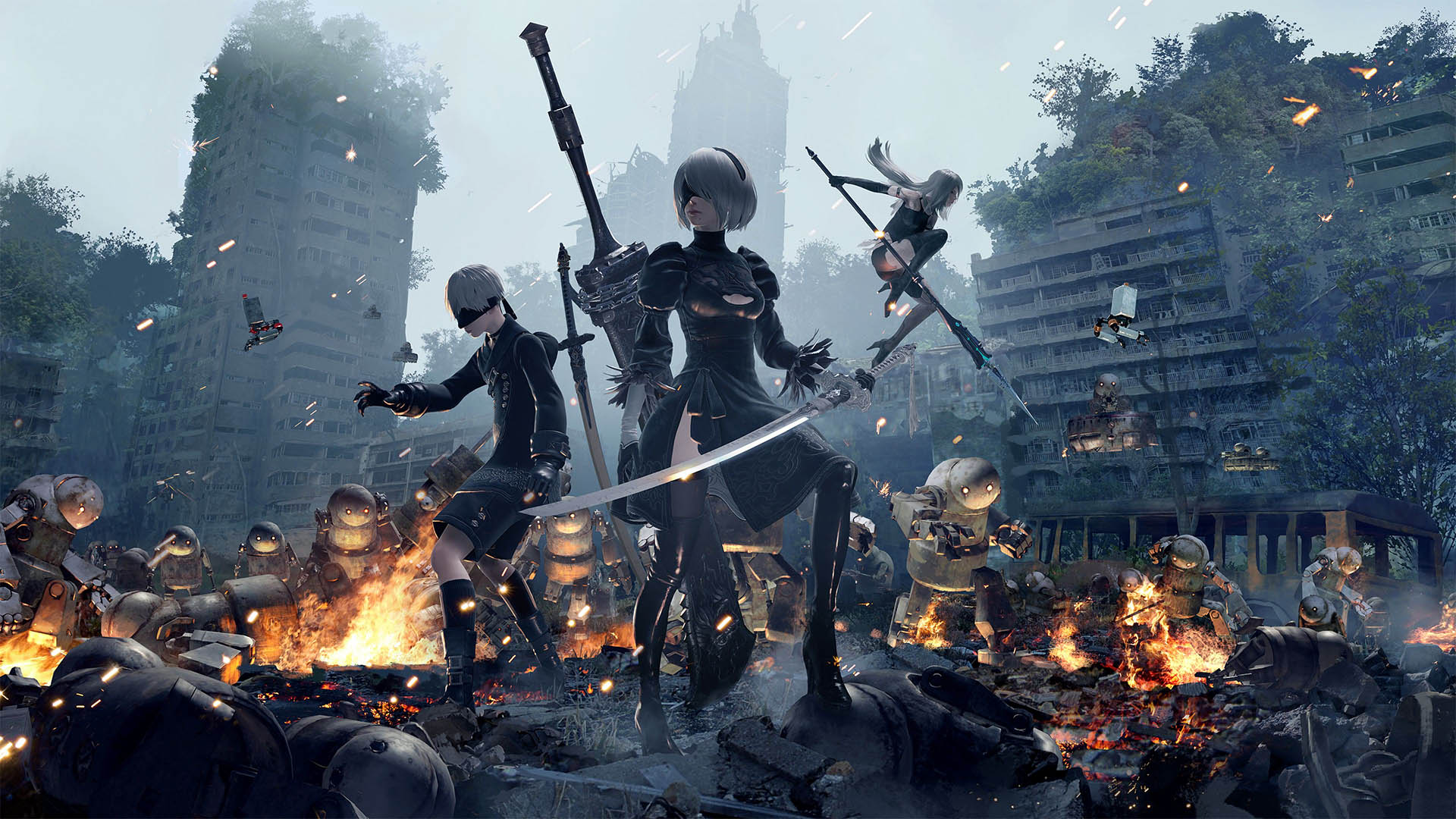 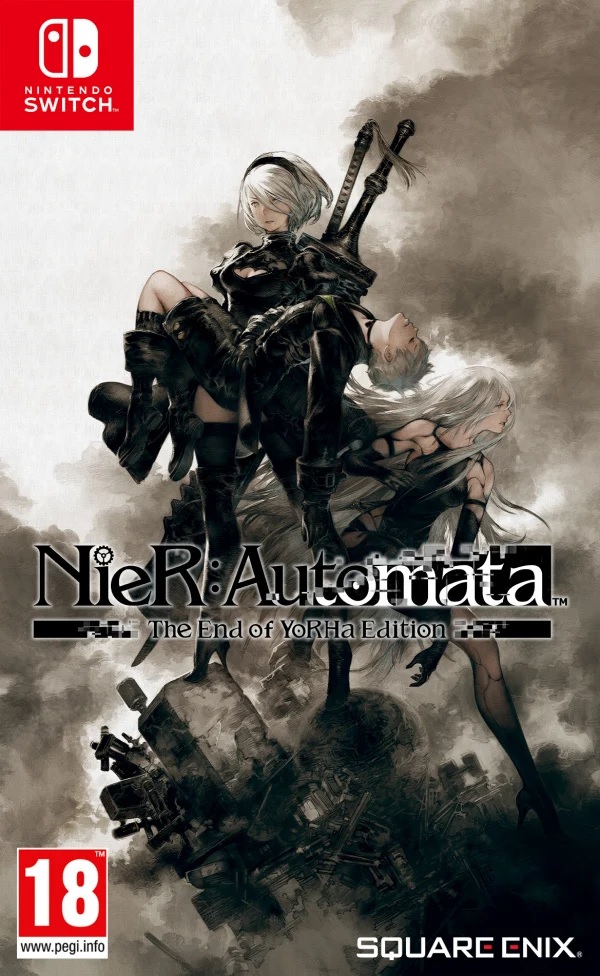 NieR, Far, Wherever you are...

NieR: Automata has been been a cornerstone of Japanese Role-Playing titles since its release back in 2017. One of the greatest archetypes of modern RPG’s, given its extensive design and freeform battle style and expeditious pacing that could only be compared to PlatinumGames’ hack ‘n slasher, Bayonetta. A flavourful form of style and sexy brings flair to fruition through its symbolism of triumph and fear. It certainly has defined an entire generation of its ilk, bringing forward many role-players and introducing the world to its true predecessor in NieR Replicant – the reprised and revived Japanese version of NIER (2010), localised for western audiences. NieR: Automata changed the landscape in marvellous fashion by presenting a null, almost void universe yet gave it life with its war-torn front, and a protagonist and cohort with personalities to match.

It’s apropos that both playable characters in the title’s campaign shield their eyes, for what hopeless intent lies behind them may tell an entire tale with them exposed. NieR: Automata is a masterpiece, reeling in an onslaught of action, drama, suspense and cinematic story telling that outclasses many action-adventures. One that’s perilous narrative could only be told through such an antagonising yet wondrous world, overflowing with utter beauty. You know those moments where your emotions catch up to you? Where your spine tingles, and goose bumps raise the hairs on your arms? Where you unexpectedly tear up from sheer elation or sorrow? NieR: Automata expels these sensations, be it human like but ironic that the character you play is less-than. That, is art. Now, the question here is, did developer Virtuos pull this off the same sort of presentation with their port of the title to Nintendo Switch?

I mean, you already know the score of this review so of course it’s Yes. But how? How did Virtuos – the studio responsible for successfully porting The Witcher 3: The Wild Hunt, DOOM, Dying Light, Bioshock: The Collection and a myriad of other titles – pull off porting this incredible feat for the underpowered portable handheld? The amount of polish needed to have NieR: Automata perform at optimal standard would have been immense, yet the title runs quite stable. Granted, it’s locked at 30fps, NieR: Automata’s presentation isn’t affected by framerate. It’s how the title performs, and is demonstrated overall and is quite possibly one of the greatest examples in how to one; water down detail without noticeable sacrifice, and two; leave enough of its foundation that its perceived as untouched and outclassing a myriad of other ports to the hybrid platform.

Granted, we’ve seen a plethora of ports that have more-or-less taken a huge bump in favour of cramming as much as possible, yet taking a hit to its reputation on commercialising its handheld version for the worst. NieR: Automata has proven that it’s most definitely possible to clean and craft a perfectly playable, and presentable port without any compromise. Devil’s advocate, it of course displays some unattractive jaggeds while docked but I’ve seen worse. It’s surprisingly stable across its entire experience, without any stutters or lag which I honestly went in expecting from a title as rich and lofty as this one. As mentioned, there are some takeaways from it that are noticed only if looking with a keen eye, such as downgraded shadowing, and some stripped lighting artefacts that are insufficient enough that it’s minimal impact on presentation is unobserved.

Queries such as these would usually be noted as qualms, yet for some reason NieR: Automata’s everlasting beauty outshines these erasures, by only highlighting more of its underlying presentation and incredible performance. A desolate landmass, full of ruins and sandy runes that are clustered with enemy bases and uninhabitable enclosures that are shaped to be arenas, forthcoming of our hero’s respective attributes. 2B and 9S are simply amazing to control, and handling them in handheld mode was nothing short of exciting. Experiencing the campaign in its entirety on my OLED Nintendo Switch was an aesthetic eye-opener that made me appreciate the campaign more than I had on other platforms. I don’t know if it was feeling up-close and personal with each character, or just having the convenience of playing the game on the go, but it was nothing short of smooth from beginning to end.

NieR: Automata The End of YoRHa Edition is an immaculate port that should be placed as the bar for what is a prime example in how to bring Triple-A, third party titles of a grand scale to a smaller platform.

NieR: Automata’s contrast between freeform role-playing, to platforming puzzle, then sci-fi aerial shooter breaks any form of tediousness that can set in quickly by simply traversing its lifeless space. But changing it up helps avert any chance of cumbersome gameplay, and rapidly skews its pace to either thinking fast on your feet, or be inquisitive toward clues on the screen. What’s funny here is after playing hours upon hours of Astral Chain for Nintendo Switch, I began to see many facets lifted from NieR: Automata, that made the action RPG an essential and amazing exclusive to the platform. Taking out swarms of enemy androids with the aid of 9S to back up our heroine is just an insanely insidious delight, with a variety of ways to literally carve out an encounter. Through traditional hack ‘n slash means, sporadically sprinting across the battle field or grinding along the rusty rails of corroding architecture, it’s cinematic flamboyance is unequivocally unmatched.

✔️ Quite possible the best port to the Nintendo Switch, I’ve ever seen.

✔️ Maintains the beauty and charm of its original iteration for other platforms.

❌ Minor – if anything, insignificant bugs that can be patched.

Perspective shifts within the title are welcome additions to how a freeform to fixed camera works, and cultivates an expectancy in from 3D to 2D, then top-down moments or third-person perspective while piloting a ship. A myriad of visual experiences that are easy to adapt with, keeping much of its gameplay loop similar enough to retain an offensive combat arsenal right throughout the title. Keeping the experience crisp and clean on a smaller screen was important here, retaining a minimalist UI to navigate without cluttering. The mini-map will accompany 2B on her journey while signalling spotted enemies or landmarks without much detail.

Side quests or other objectives will be placed on the map with an icon signalling an interactive quest or dialogue that will aid 2B in her journey, or could also show a vendor for which you can purchase numerous items, weapons or collectables. The title does its best to not break the immersion of cutting between pre-rendered cutscene to in-game experience, granted it won’t do it seamlessly, it does have moments where in-game cinematics are attached to the end of something prepared prior to presenting in real time. I noticed that motion controls were an option, but I decided not to play in this mode, as I believe the gimmick is passé, and unconventional for NieR’s style of gameplay.

In docked mode there are apparent downgrades made to textures, flattening their look on the big screen to a smudged, poorly rendered perception to its gorgeous overlay perceived on a smaller screen thanks to pixel density. Don’t get me wrong, with some creative shadow-play, it’s barely noticeable but I would be remiss if I hadn’t note it. The post-cataclysmic properties of a dystopian world that strives on hope is easily translated through bland, and brown palettes that are brightened by depth of field and lens flares. It’s an artform that is abused in cinema and modern gaming, but can be carefully adjusted to make even the simplest overlay look a million bucks. A helping hand to newcomers of the genre is an automatic mode that allows 2B to have weaponry cycle her and collide with enemies while she lays in her own hand to hand combat; or hand to … heel? It streamlines a gateway for the novice without any difficulty spike, lending a hand for those that just in it for the story.

Then we have NieR: Automata’s outstanding overture. A soundtrack that’s fit for a journey of massive magnitude. The eerie aura experienced through an echoing, unpromising society is enhanced by Japanese composer Keiichi Okabe, who’s workings throughout the Drakengard franchise have been heralded as some of the greatest in gaming, period. From solemn and sombre, to intense and exciting, a rush filled with differentiating tempo’s and genres in music are arranged and composed with unquestionable integrity throughout each piece of scenery. Keigo Hoashi and Kuniyuki Takahashi co-produce coinciding musical pieces for the title, alongside Okabe’s orchestral masterpieces. I would place NieR: Automata atop some of the best in gaming arrangements like Persona 5, Hellblade: Senua’s Sacrifice, Horizon: Zero Dawn or The Legend of Zelda: Breath of the Wild – all incredible 2017 calendar releases.

NieR: Automata The End of YoRHa Edition is an immaculate port that should be placed as the bar for what is a prime example in how to bring Triple-A, third party titles of a grand scale to a smaller platform. It’s the cleanest experience I’ve had in any port from a powerhouse like the PS4, XBOX or PC to the Nintendo Switch, that makes it a must experience or ultimately an essential to your existing Switch library. From story, to gameplay, to presentation and design. Audio-Visual cues, to soundtrack and just its sheer joy in overall delivery does this re-release incredible justice, even giving fans that have yet to pick up this prime tale the perfect excuse not to miss it. Sure, its optimal performance would be behind the rig of a massive tower that may house a RTX 3090 or higher with 60FPS at 4K, but for the Nintendo Switch this is the most impressive experience I’ve had with the title on a smaller scale. NieR: Automata The End of YoRHa is without question, the greatest port for Nintendo Switch, ever.

Nier: Automata is a 2017 action role-playing game developed by PlatinumGames and published by Square Enix. It is a sequel to the 2010 video game Nier, itself a spin-off and sequel of the Drakengard series.

Story
10
Gameplay
10
Presentation
10
Sound
10
10
Supplied by the publisher, for our review. 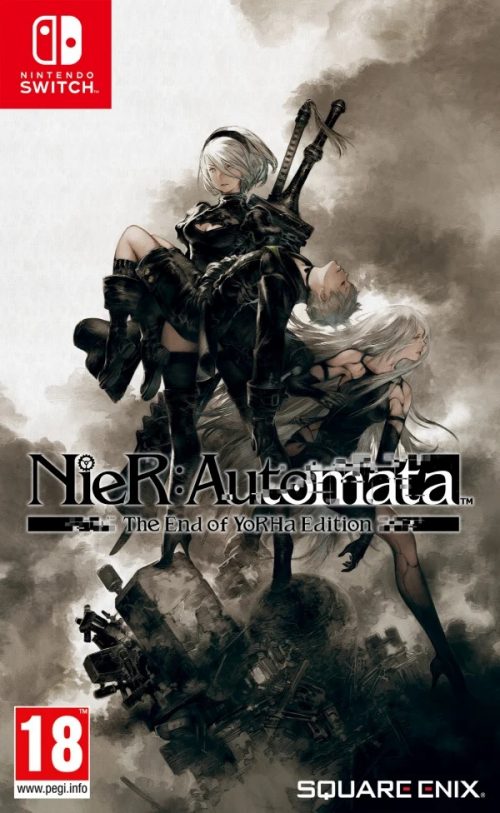 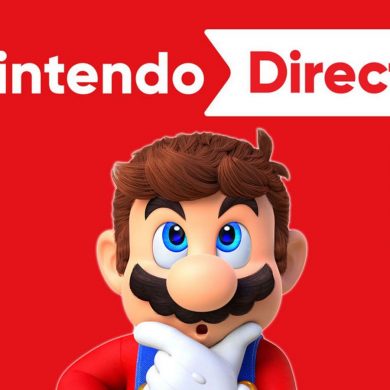