One of the best JRPG's ever

Ni No Kuni: Wrath of the White Witch is one of the best JPRG’s ever. I could simply give this review it’s score, and end it on that statement alone. However, let me elaborate. After all, you’re here wanting to know why, Right? While many may remember Ni no Kuni’s initial release as a PlayStation 3 title, it was actually a NintendoDS title released back in December of 2010. Ni No Kuni: Dominion of the Dark Djinn, developed and published by Level-5 was an exclusive to Japan, which dominated the handheld market just behind the Monster Hunter franchise, within it’s initial month of release. The title garnered praise for it’s use of animated sequences which were produced by the legendary Studio Ghibli, a rare occurrence and technical feat that challenged the NintendoDS’ hardware. After 6 months of charting best-sellers, the studio decided to start development on rebuilding the title from the ground up for release on home console. Heavily inspired by the original entry’s plot, Wrath of the White Witch saw it’s PlayStation 3 release in November, 2011. After again charting the best-sellers that month, the company saught localising the title for a western release.

After two years of translation, Ni no Kuni hit Western and European shores in January, 2013 and became an acclaimed hit world wide, with critics labeling the title as Japanese Role-Playing perfection. The title’s legacy has been upheld as one of the most poignant and inspirational game’s to hit the JRPG market, with other games taking note of it’s unique presentation, compelling tale, vibrant design, and lovable characters. Legendary Animator Yoshiyuki Momose (Spirited Away, Mary and the Witches Flower) was heavily involved with the title’s design. Once tasked with the title’s initial concept, Momose served as the game’s director of animation, and helped develop not only it’s Animated sequences, but it’s in-game rendered cutscenes. The Ni no Kuni franchise still holds it’s legacy as one of the first and only JRPG series to collaborate with the legendary Japanese Animation Studio. The success of the first entry led to it’s sequel in 2018, with Ni no Kuni II: Revenant Kingdom, released in March of 2018. Despite “White Witch’s” popularity, total sales only reached a little over a million units sold world-wide, due to unexpected manufacturing costs. It is one of the rarest title’s to find on the PlayStation 3, to this date. With the release of the sequel, many JRPG fans were not familiar with the series initial plot, and had not experienced the title’s first entry. Thus, this incredible remaster of this timeless classic that is now available for everyone to experience, before heading right into it’s magical sequel. If you have played the sequel before experiencing it’s predecessor, I can tell you, that you are going to feel the exact same magic heading right into “Wrath of the White Witch”.

To give some context to it’s plot without any major spoilers, meet Oliver or Ollie for short. A young, and happy child living in the small town of Motorville. While running some errands, Olllie meets with his best friend, Philip. A brash, yet aspiring mechanic and car enthusiast who is designing a small buzz cart for the two to eventually race with. Phil encourages Ollie to sneak out later that night, and come by his garage to see the results of his build. While initially reluctant to sneak out, Ollie agree’s to meet with Phil to check out the new ride. Ollie heads home to meet with his mother Alice, or Allie for short. Ollie starts to conspire his plan by asking his mother about her “busy day” and how she will need to get an early night’s rest. His mother agree’s as she will need to get as much rest due to her concert rehearsal, the following day. Later that night, Ollie covertly sneaks out after his mother heads to sleep, meeting with Phil at the garage for the grand reveal of his latest project. The two stake out their path, however Ollie runs into a young girl who warns him “not to go” as it will only lead to bad things. Philip catches up with Ollie after taking too long to report back, only for Ollie to claim that the two had been caught by the girl who disappears out of existence. After looking completely dumbfounded by Ollie’s “imagination”, Phil claims that Ollie may be “goin’ screwy” but also claimed that it could have been “Starey Mary”, an introvert who shyly stares out her window at other kids in the neighbourhood. The two head back to the garage to retrieve the vehicle, with Ollie pondering who the young girl could have been.

It’s at this moment, we’re introduced to the antagonist of the title “The White Witch”, who claims that Oliver is “The boy who will save the world” amidst a long told prophecy. While Ollie may only be a child, her belief is humans present a strength that is disturbingly powerful. She instructs her loyal subject, and pet to use his powers to kill Oliver, in a “supposed” accident loosening one of the wheels on the car. Allie suddenly wakes up from a nightmare hearing echo’s of Ollie screaming for her, she runs to find that he is not at home. Meanwhile, Ollie and Phil are preparing for take off while his mother is in search for him, nearby. Being warned by Phil, not to take off too fast, Ollie speeds off in the vehicle, only for the loosened wheel to come off. Oliver crashes the car in the nearby lake, while his mother runs by spotting Ollie drowning. Allie saves Ollie and while everything seemed fine, she suddenly clutches her chest in pain with a nearby local claiming that “she always had a weak heart”. Due to these events, Allie passes away with Oliver at her bedside, asking her son to be strong. Three days later, Ollie remains locked away in his room refusing to come out. He clutches a toy that was given to him by his mother, that suddenly comes to life after his teardrops mysteriously awaken him. Enter Mr. Drippy, the MVP of the title no doubt. Mr. Drippy’s cocky yet direct attitude towards Ollie, helps the young boy realise that there is hope and the two may be able to bring Allie back. Drippy explains that there are parallel worlds that exist alongside one another, but are also controlled by spiritual connections.

In his world, his version of Alice is trapped by the White Witch and convinces Ollie that she could be saved, and could potentially bring his mother back. After an initial refusal, this inspires Ollie to take Mr. Drippy up on his offer to help him save his mother, in-turn to help save his world. With a little magic and imagination, the two head off the other world and land in the first small town of the game’s campaign, Ding Dong Dell. Drippy convinces Ollie that he should look the part and change into an attire suited for a traveler or hero. It’s from this point  where the main campaign and gameplay truly begins. While Wrath of the White Witch’s gameplay style may seem unique, it foregoes the traditional JPRG turn-based style with a familiar battle style seen in the later entries of the Dragon Quest series. Being able to roam around the vast and vibrant world of Ni no Kuni, you will encounter unique battles with numerous enemies, that will land you in an arena type battle that will entail elements of turn-based combat, but will also allow players to make smaller free-style attacks against each other. Traditional character buffs, and leveling systems are present, along with character assists from different cast members you will meet on your adventure. Collecting different items scattered across the world, and looting hoards of enemies after each encounter are a breeze. Using the in-game’s UI to sort your inventory is as sleek and streamlined as you would want in any JRPG.

While vast and open, the campaign itself presents a more linear path to the endgame. It’s dynamic whereabouts yields itself from it’s dark tones the main story initiates. Ni no Kuni’s design inspired a generation of JPRG’s with it’s fundamental concept and demonstration, that could only be placed side-by-side with something as bold and risk taking as the Persona franchise. The unique blend of campaign, on-screen delivery, animated cut scenes, and an amazing soundtrack make for an exhilarating experience, that is hard to replicate. It’s impactful story writing delivers an enriching environment with an original cast of characters and design that rings true to Studio Ghibli’s magnificence, in the same vein we see in the studio’s best feature film presentations. After working on Ponyo (2008), legendary Studio Ghibli musician Naoya Fujimaki, was appointed lead composer for the game and presented an original concept for the title that only fortified the title’s reality, with his unique blend of regal yet mystifying tones that set you forth on this incredible quest. The music really does speak volumes on how beautiful the entire presentation of this incredible journey really is. The voice acting in the title is superb, showing incredible passion and range between different characters. Ni no Kuni’s Remaster enhances the original presentation, taking the title’s in-game models and terrain presenting a cleaner, crisper display in stunning 4K, along with the title’s re-rendered animated cut scenes.

Ni no Kuni: Wrath of the White Witch is unmissable. It’s one of the most magical adventures you will ever experience. While it presents a unique taste that may not be for everyone, Japanese Role-Playing lovers will be absolutely enthralled with it’s presence. Anime fans, you will not get enough of this and guess what? There’s an entire sequel that’s just as magical once you complete this enthralling remaster. It’s the RPG that inspired a whole new generation of teh genre. It’s vibrancy that offsets it’s darkness, it’s mystical quest that brings you an incredible cast of lovable characters, it’s heroic protagonist and brash sidekick will make you fall in love, instantly. It’s lush environments, along with it’s impactful offsets that will make your jaw hit the floor. It’s story that will absolutely tug at your heart strings, not going to lie… cried a little playing this again. It’s inspiring, it’s daring, it’s courageous, and completely captivating. Ni No Kuni: Wrath of the White Witch is one of the best JPRG’s ever. 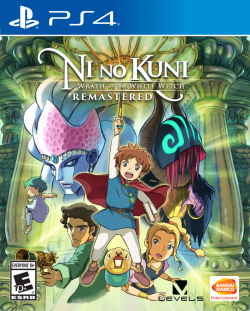 Ni no Kuni: Wrath of the White Witch is a role-playing video game, developed by Level-5. It was released for the PlayStation 3 in Japan in November 2011, and published in Western regions by Namco Bandai Games in January 2013.