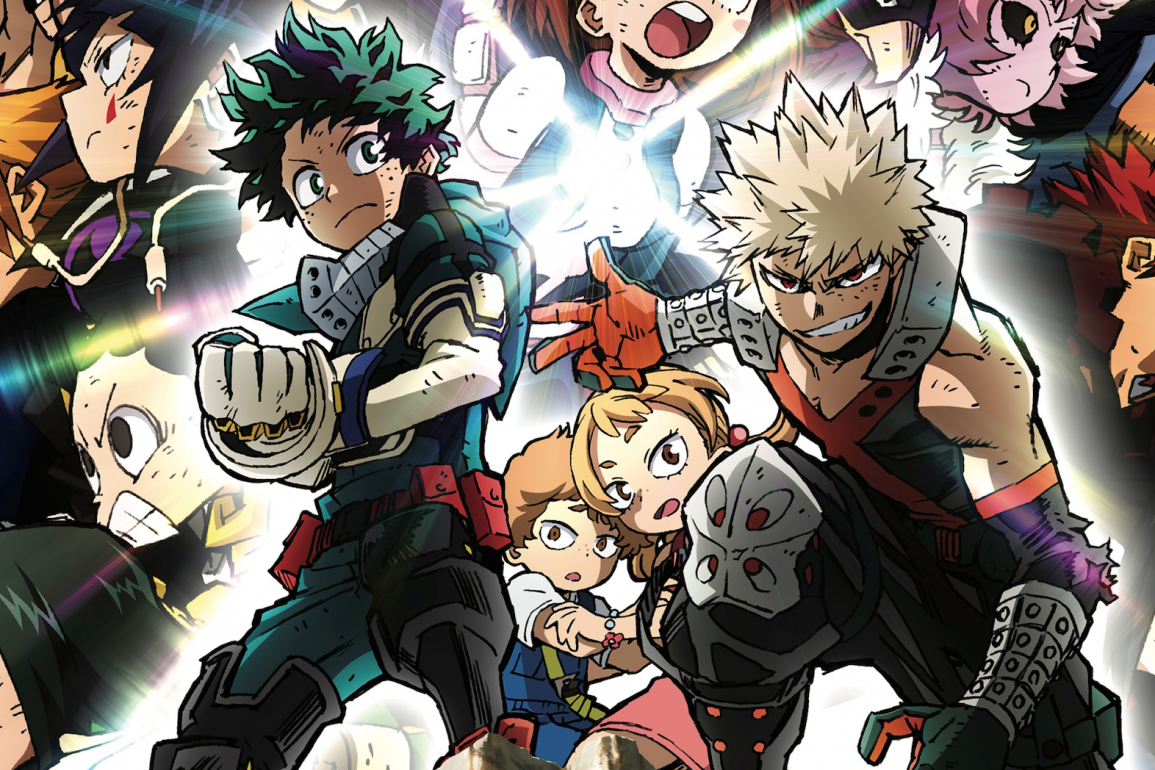 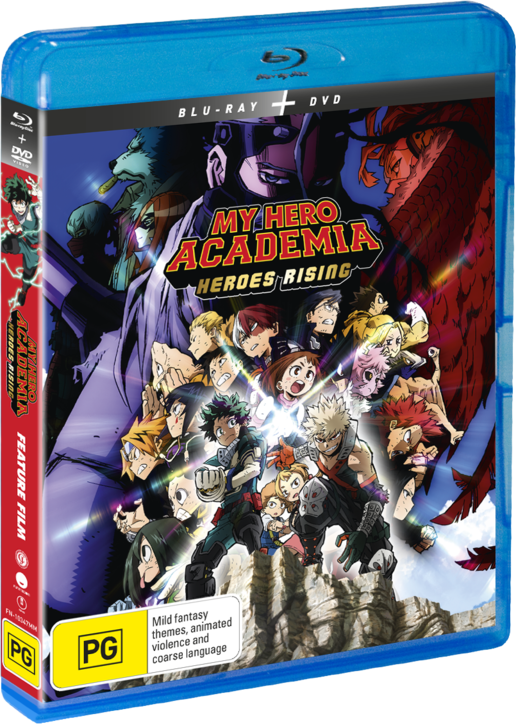 Earlier this year, I was privileged with an invite to view My Hero Academia: Heroes Rising in Cinemas, thanks to the kind folk at Madman Entertainment. Upon initial viewing of this animated epic, I was astounded by My Hero’s bridge between seasons that had progressed its narrative beyond the unexpected. There was a good week where I had to mentally dissect the entire plot. Every scenario, our heroes and their resolve, and how it may impact the much anticipated fourth season. There’s a reason why My Hero Academia (Boku no Hero Academia) has become the benchmark; the industry standard within Japanese animation. It boldly tells a tale of determination to overcome on personal levels that may be unattainable in reality. But one fact remains from this feature, its overwhelming ambition intoxicates and inspires many. Its palpable pacing delivers a rush of excitement, joy, sadness, frustration and charm. An exemplary demonstration in creative writing.

Announced back at AnimeJapan in March 2019, the untitled “Two Heroes” Sequel was slated for Christmas/Fall that year, and was said to be the last feature length movie adaptation of the franchise. Studio Bones would be leading production on the animation, along with Kenji Nagaski returning to the director’s chair, along with Yosuke Kuroda (Trigun, Sword Art Online) as lead screenwriter. The legendary Yoshihiko Umakoshi (Dragonball, Fullmetal Alchemist) would return as head artist, leading the team for his wondrous work in character design for the serialised television series, along with Yuki Hayashi (Erased, One Piece) as musical composer for the film’s incredible soundtrack. Premiering in Japan on December 20, the movie garnered an insurmountable reception from critics noting it to be Japanese Animation’s biggest theatrical release in the last five years. The film was so big a 4D adaptation was unveiled in January.

After a tumultuous turn of events involving The League of Villians, Class 1-A are relocated to a the remote location of Nabu Island, as part of U.A.’s scholar safety program. Isolated from society, the team are protected from the nefarious acts of escaped villain Nine, and his devious quest to harvest an evil society of the supernaturally gifted. Detained and confined, the masked mercenary had been rescued by a convoy carrying the pod that had kept the brute at bay. After Enji and Takami had destroyed the vehicle carrying the miscreant, the duo discover the support capsule containing Nine, was empty. Determined to establish his new world, Nine reconvenes with the League, and lays out his plans to absorb the quirks of Earth’s mightiest. While roaming the island and acquainting himself with its residents, Deku (Izuku Midoriya) meets a pair of siblings, Mahoro Shimano and her younger brother Katsuma.

After meddlesome duo cry wolf, Deku discovers the two had only been testing the hero. Mahoro deems Midoriya unworthy, while her younger brother thanks Emerald clad leader for his assistance. Grabbing Katsuma by the hand and making a whiskful retreat, Deku regroups with Uraraka and Jiro. The pair of heroines find Midoriya kneeling and apologising to the escaping siblings, wondering what had just happened. Deku explains the childish situation, but was glad that the kids were safe and that’s all that mattered. Angered by the hero’s untimely response, Mahoro begins plot a dastardly plan to prove to her younger brother why Class 1-A are unworthy of protecting the people of Nabu Island. Meanwhile back in Tokyo, Toshinori Yagi, the former All Might was concerned for his former student’s well-being.

Shota Aizawa, also known as Eraser Head, details the quiet life lead by locals on Nabu Island, and that there was little to no threat for them there. It was time for the students to understand that being a hero is not all about the glitz and glamour of extreme battle, but to serve and protect those in need. Yagi agrees with Aizawa’s sentiment, knowing full well that his former students were well prepared under the guidance of their leader, and the current holder of One for All, Deku. After a long day meeting the townsfolk, and assisting them with simple handed tasks, the Mayor of Nabu is accompanied by residents who cook up a feast for the students as a thank you. Labelled the laziest member of the crew, Bakugo is placed on night watch as Class 1-A turn in for the night. While the entire team are fast asleep, Deku continues to train outdoors in hopes of building his strength to utilise One for All at its greatest potential.

A canonical joyride that will have you wiping the sweat from your brow, and tears from your eyes. My Hero Academia: Heroes Rising is an essential for action fans. Cannot wait to dive into Season four.

While on night patrol, Bakugo confronts Deku about his inherited ability and motivates the naturally quirkless hero in making the power his own so they could finally have their showdown. Meanwhile, Hawks had been gathering intel on Nine’s quirk, and how the villain may be able to steal other hero’s abilities for his own use. He explains that there may be a chance that Nine’s threat is indeed catastrophic. With Shigaraki goons identified, it is presumed that the S-Rank leader has a hand (see what I did there?) in the evildoer’s escape. While back in Tokyo, the Shimano children held a video conference with their father who had suddenly been attacked by Nine’s henchmen while working his night job in the city.

Nine promised to spare his life, in favour of stealing his quirk. Upon absorbing the power, Nine unleashes complete destruction throughout metropolis using telekinesis to destroy high rise towers, and weather manipulation brewing a large lightning storm, striking buildings and setting them ablaze. The horde of horrendous deviants celebrate their attack, but only for a short period after Nine had suddenly had the powers stripped due to the Father’s Blood type. Angered by these developments, the villain squad believe their efforts were completely for nothing until they discover Shimano-San’s Phone playing a recording of his two children. With quirks being hereditary, Nine sets a course for Nabu Island in search for the siblings in hopes of either inheriting their father’s powerful quirk.

In what could be Class 1-A’s finest moment thus far, Heroes Rising provides viewers preparation for My Hero’s fast approaching climax. It’s been teased for quite some time that the television series is set to wrap up soon. With various displays of emotional sequences and set pieces, along with the narrative’s tedious push towards Deku’s ultimate triumph in becoming Earth’s mightiest hero, My Hero Academia: Heroes Rising is surely Studio Bones’ magnum opus. There have been epic sagas that have spawn from the anime adaptation that have taken life of its own, deviating from Boku no Hero’s source material. The mangaka is lightyears ahead of the animation, but only in terms of progression. My Hero Academia the anime series has developed a prosperous, if anything booming renaissance for the medium we love.

Heroes Rising envelopes the re-inviting sensation once held by the esteemed legacy that had been established by animation of significant magnitude within the Shonen; DragonBall Z, The Irresponsible Captain Tylor, Evangelion and of course, Akira. A masterclass of high calibre storytelling, accompanied by incredibly captivating animation, and an encroaching cast of lovable characters. The allure of Heroes Rising is riveting, almost overwhelming in which it manages to bring out the best of your emotions. Deku’s inspiring successes, Bakugo’s bawdy personality, Nine’s tone deaf, stone faced demeanour and All Might’s encouragement play an important role in this feature, and its future. The meddlesome Shimano kids gift a testimony to our protagonist and his will to continue his fight. The struggle to achieve, as Midoriya edges closer towards his personal goal.

From opening to close, My Hero Academia: Heroes Rising will have you on the edge of your seat. There are a ton of ‘spoilerific’ moments that I have omitted from this analysis just because of how insane they are. The immense pressure put on our class of Earth’s mightiest heroes, and the task they’re set to undertake within this feature will blow My Hero’s devout fanbase completely away. A thrillride that forces friendly rivals to work cohesively in unison to take on their greatest threat. Nine’s unique ability sets a precipice for a monumental occasion that’s sure to tear the universe apart. The impact of this story, and how it cascades is refreshing; A canonical joyride that will have you wiping the sweat from your brow, and tears from your eyes. My Hero Academia: Heroes Rising is an essential for action fans. Cannot wait to dive into Season four. 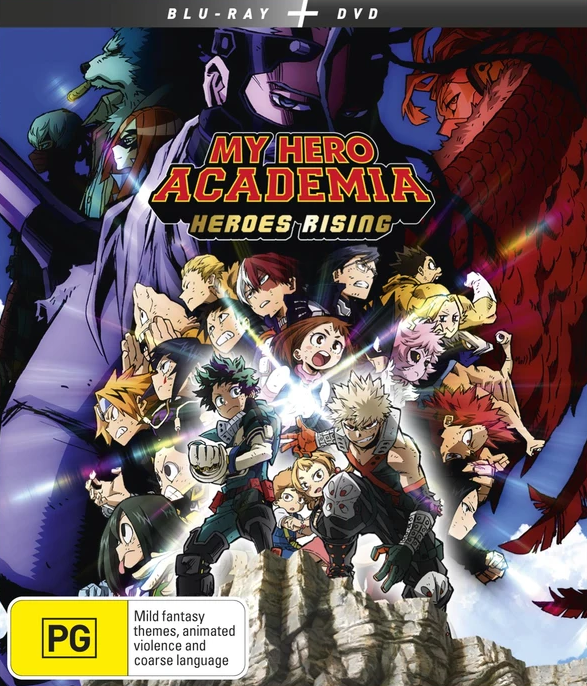 The League of Villains is being pursued by Endeavor and Hawks, while driving off in a truck carrying mysterious cargo. After destroying the truck, despite failing to apprehend the League members, the heroes find an empty life support capsule. The man inside, Nine, a villain, has escaped and regroups with his team of villains, planning to create a society where those with strong Quirks rule over those with weak ones. U.A. High’s Class 1-A has been sent to the remote Nabu Island as part of a safety program. Izuku Midoriya, the holder of One for All, meets Mahoro Shimano, and her brother Katsuma, residents of the island. Bonding with them along with his rival Katsuki Bakugo, they discover that Katsuma wishes to become a hero, but Mahoro seeks to dissuade him, believing his Quirk to be unsuited for that line of work. 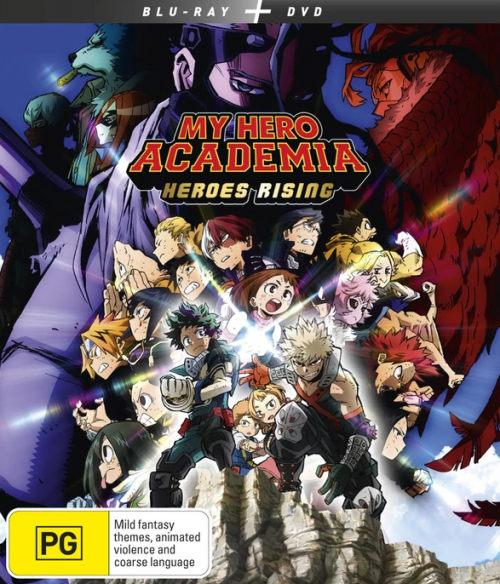