Platforming and puzzle elements halt momentum later in the game

Above me is a small room that has a number of gun toting enemies surrounding each side of a narrow one way entrance. The only way in is to wall kick my way up, possibly to my death. Never fear, one of video games most recent deadly weapons, the frying pan is here to assist. Kicking it up through the entrance way, slowing down time, then raining bullets into the mid-air frying pan ricochet kills the unsuspecting enemies above, clearing the way. This, along with shooting drum barrels to fall onto enemies, launching skateboards into faces, kicking chef knives into chests and doing your best Billy Elliott impression by pirouetting across the surface firing dual wielded pistols are just some of the crazy scenarios you can find yourself in My Friend Pedro.

My Friend Pedro is developed by DeadToast Entertainment, an independent developer made up of one person, Victor Agren. Working for Media Molecule for six years as a level designer on titles such as Little Big Planet 1, Little Big Planet 2 and Tearaway, Victor went out on his own, creating flash games Nunchuck Charlie: A Love Story and the original My Friend Pedro for Adult Swim Games. Released in 2014, My Friend Pedro was wildly popular and has a total of over 25 million plays in its lifetime. With overwhelming success and demand, DeadToast teamed up with publisher Devolver Digital for a fully-fledged game that built off its already successful formula.

My Friend Pedro is a 2D side scroller shoot ‘em up that draws heavy influence and inspiration from Max Payne and The Matrix, which in turn were inspired by John Woo movies that first emphasised slow-motion gunplay. Although John Woo was one of the first, it was The Matrix that helped explode and popularise the term and use of bullet time, even to the degree where Warner Bros trademarked the term. My Friend Pedro is built on this slow-motion mechanic, coining it ‘focus’. You play as an unnamed masked character that awakens from being knocked unconscious to a homicidal banana named Pedro that is willing you on a vengeful criminal mass murdering spree. The motive and actions aren’t totally clear until later on in the game and the stories hook isn’t really as important as the addictive gameplay loop that keeps you fixated and propelling you through levels.

Each level has you taking down a bunch of criminal goons with your dual wielding pistols. As you progress you unlock various weapons such as shotguns, uzis and sniper rifles that each have their own strengths and weaknesses that have you evaluating the best weapon and approach before each conflict. Every kill adds to your combo and the idea for each level is to chain as many kills together whilst maintaining your combo and multiplying your score. The best way to do this is by using the aforementioned focus mode. Clicking L3 on the left stick toggles slow motion, allowing you to dodge bullets, or aim at multiple enemies at once with each outstretched arm, chaining same time split kills together. It’s an awesome sight seeing enemies blasted away or your own character flailing through the air with the games rag doll physics. The focus mode is quite generous and I found I was in slow motion for most of the time, trying to chain kills together. At normal pace the game is quite fast and alternating between real and slow motion was the key to gaining momentum and flow to quickly power through levels.

The levels are roughly 5-10 minutes long depending on your play style and skill level. I played in Normal (Hard and Bananas were available) and found it a reasonable challenge without being overwhelming. Each level grades you on points score that equates to C, B, A or S rank. Although the game is only 40 levels across 3-4 hours, the difficulties, level grades and leaderboards offer great replay value to completionists or high score chasers. Aside from one level I won’t mention due to spoilers, My Friend Pedro has a very neon cyber punk visual to it and looks great. Lots of purple and green blended with dark industrial settings create a very gritty futuristic setting. Couple that with a heavy bass synth powered score and I love the tone it strives for. Juxtapose that with the main characters mask and yellow banana friend and the game visually pops. Even in handheld mode.

Speaking of handheld mode, I played half the game docked with a pro controller and the other half handheld. The way the controls are mapped, the pro controller felt infinitely more comfortable and less cramped jumping from weapon to weapon (D pad) and using multiple shoulder buttons at once to split aim and dodge oncoming fire at the same time. Despite being more comfortable, handheld mode still didn’t detract from my experience and is perfect for short pick up and play stints. The level design felt a lot like Hotline Miami in the sense that each room felt like a puzzle and who to target first and how to approach and when to use or not use focus was crucial. The later levels involved more platforming and shooting and pressing of levers to activate platforms that normally wouldn’t be a negative, but it killed the fast paced flow from some of the earlier levels.

That momentum and state of flow is the games strength and when it started to slow things down later and spread out the various enemy encounters with puzzle solving, it had me salivating and wondering when my next ridiculous slow motion kill highlights package was coming. Of all the levels, I loved the obscure ones that transitioned between each new setting. There were also some creative boss battles and mini boss battles, but not nearly enough. Drones, enemy activating lasers, lasers that killed on impact and heavy armoured enemies near the end offered good variation to normal melee and firing enemies from earlier but I would have loved them in some of the more obscure levels we are given a small taste of.

Overall I had an absolute blast playing My Friend Pedro. It did enough to hold my attention and kept me wanting to see what the next level had in store. Zip lining upside down in slow motion, pumping rounds in to multiple enemies whilst planning my dismount through a glass window into another enemy filled room is the closest I’ll get to playing as Neo in the ultra-cool and violent lobby scene from The Matrix. Visually impressive, a synth heavy score and an addictive gameplay loop makes this a must play for Switch owners and shoot ‘em up fans. 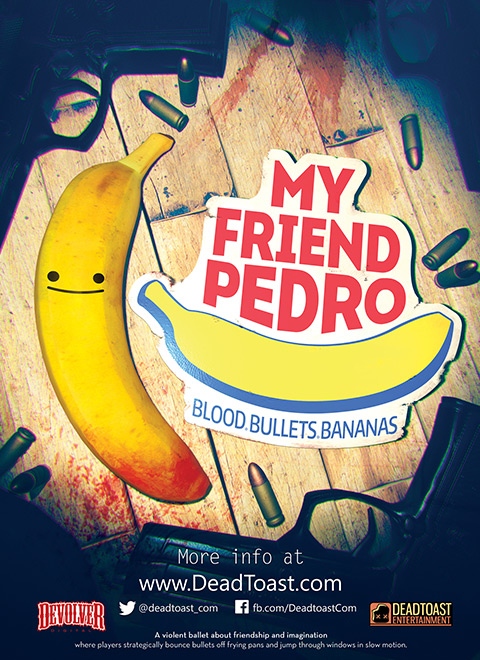 A Review code was supplied by Devolver Digital, for this review.