Sir Dan is a hilarious hero that I absolutely love

Faithful to it's original gameplay, but outdated

Combat is certainly outdated, and feels like a quick button mash

Remakes are risky business. There’s something kindred to revisiting a title from the early-to-late 90’s that just basks perfectly in nostalgia’s purview. We have seen it recently with the Crash N. Sane Trilogy, Crash Team Racing Nitro Fueled, and just a year ago with the Spyro Reignited Trilogy from Activision. While all three titles delivered on a promise that we would experience the golden age of gaming once again, the onset of it’s longevity started to become an issue with these classics. While some title’s from the late 80’s to early 90’s remain timeless, we enter the realm of 3D classic titles and come to the realisation that revisiting them in an era where we’re totally spoiled with incredible 3D gaming and cinematic experiences, they certainly aren’t as great as they used to be. Yes, of course gaming harbored on technological restrictions that we have surpassed incredibly with each generation passing us by, but the insatiable need to revisit these titles on a current generation console has me questioning whether we want to lift the exact framework of a title from yesteryear? Or resurrect a franchise, have it play similarly to what we experienced as a youngster, and polish the gameplay just enough to make it feel like a modern day gaming experience. I will give credit, where credit is due, Medievil tries it’s best to accomplish this feat, but certainly tries to blanket it’s janky mechanics with stunning visuals.

Having a remaster so faithful to it’s original release, Medievil plays like a title from 1998. Whether this is a good thing, or a bad thing solely lies within the player who is either a devotee to it’s original PlayStation release, or someone that is looking for their nostalgia bone to be tickled. It’s truly somewhat mesmerising to re-experience a title from a past-generation, having seen what gaming was really like and how restrictive gameplay really was. Trying to sell this nowadays, may be somewhat an accomplishment, given that a younger audience is now been exposed and spoiled by the freedom of online gaming, refined presentation, and a multitude of newer genre’s to choose from. I always refer to the scene from Back to the Future Part II, where Marty plays “The Wild Gunman” arcade machine with two kids referring it to a “Baby’s Toy”. I always fear a younger audience would not understand a true nostalgic experience, but I do believe that given a plethora of indie titles that have been presented within the past few years, have done their best to show off true old school gaming, with a new spin.

MediEvil however, does nothing different from what it’s original release presented, and that may be it’s issue. For a puzzle-platformer that still remains today a true classic, may have a problem with bypassing it’s initial flaws the game presented two decades ago. While the game released in a period where 3D titles where all the rave, we were still spoiled for choice by many other franchises in that era, that had seemingly polished the category in many ways, above what was presented here. Challenging players with great puzzles, some light-hearted action, simple hack-and-slash combat mechanics certainly personified what was presented to us with MediEvil. Revisiting Gallowmere is a treat, especially at this time of year with Halloween upon us. It’s spooky vibrancy plays well with it’s range of locale within the town. With a cast of quirky characters and spooky monsters to boot, MediEvil stood out from other title’s that were approaching more of an adventurous design in their protagonists, and concept design. While exploration presented more a fetch-quest style, rather than a looter, it depicted what would be revolutionary for many titles within the genre for years to come.

MediEvil’s combat system does gradually get better as you play, with multiple weaponry becoming available throughout your time in-game. A choice from Melee to ranged attacks deciphers each monsters design in rough AI, and develops your skill-range quite well. While the title’s aged gameplay may not quite fit the mold for the current generation, this certainly fits the mold of it’s niche audience that was intended here. However, lifting directly from the framework bough over quite a few flaws here that was inexplicably unavoidable. Shoddy camera work instantly kills the vibe that this game was intending to reintroduce, and spoils most of what was trying to be displayed. It’s frustating trying knowing that I was heading back into this title, and hoping that this key problem would have been attended to before being re-released. However, it seemed like not only did they want to bring what was great about the title, but also what was questionable too. It’s the little things that could spoil it for the entire experience, such as a non-existent checkpoint system, that could have been a nice feature in place of this revisit. I understand that these features may have never existed back in ’98, but it’s definitely commonplace now for a society that’s moving on faster, and who lose interest in title’s quicker.

Character health is also an issue. Completing a level will not replenish your health what so ever. Instead, you will have to rely on what you have. And if you lose? No checkpoints, it’s back to the beginning of the level. It’s incredible to know that other titles from the same generation, in the exact same year have all these features in place. Croc: Legend of the Gobbos released a year prior to this title, with a development team even smaller than this one, yet had every single feature that this title has, but includes a checkpoint system, and a health system that relies on looting and collecting. While there may have been some similarities in place such as shoddy camera mechanics, and a simple hack-and-slash combat style that kills enemies with one foul swoop, the terrain and presentation within the title seemed much more polished than what we were given with MediEvil, it’s mind-boggling. And to even experience the exact same flaws within it’s remaster, lays even more confusion to how something that really did not age that gracefully, could be considered for a remaster.

However, MediEvil’s charm and nostalgia certainly does deserve your attention. Just note that you’re not entering something that was completely revolutionary for it’s time. There were certainly title’s from that period that mastered it’s craft beyond anything that was expected. The Crash N. Sane Trilogy was most definitely deserving of it’s remaster, a franchise that birthed the idea of some of the greatest gaming experiences we have come to love and adore in our current climate of gaming, from the exact same studio. MediEvil no doubt, is Niche’. It’s core audience loves it’s casual appeal that brings it’s spooky vibe across from it’s simplistic presentation that was stunningly remastered quite well here with incredible character and world design that I absolutely adored here. However, gathering it’s issues that was laden across it’s original release and plastering them into this supposed “polished” experience, was truly unwelcome in some circumstances. My definite thought of what was trying to be translated here was, an initial footprint of how gaming truly was for a generation older, to make a younger generation understand how tough we all truly had it.

Would I recommend anyone give MediEvil (2019) a crack? Yes, of course. MediEvil presents all the trials and tribulations that went into developing a title back in the golden age of 3D gaming. It’s not terrible in the slightest, it’s actually great. Listing a title’s flaws is easier than nit-picking what is truly a nostalgic experience. Would I say that it’s a title that most people would move on from quickly? Probably. It’s certainly meant for it’s Niche market who adore the original, and would love to re-experience their childhood. Would it be recommended to a younger audience? Probably not. Once again, it’s hard to re-adjust anyone who has been exposed to anything greater than they have already been given. It’s weird one really. I liked my time playing this title, it bought back everything that was quirky and crazy about the late 90’s and “cheap” 3D platforming that would be critically panned nowadays for “lazy development”. It’s certainly a juxtaposition in what would and could be for gaming. MediEvil translates what gaming was for golden-era of gaming, smaller development teams with an audience that had a bigger tolerance for a certain standard of gaming, and that’s something I can definitely appreciate when revisiting this title. 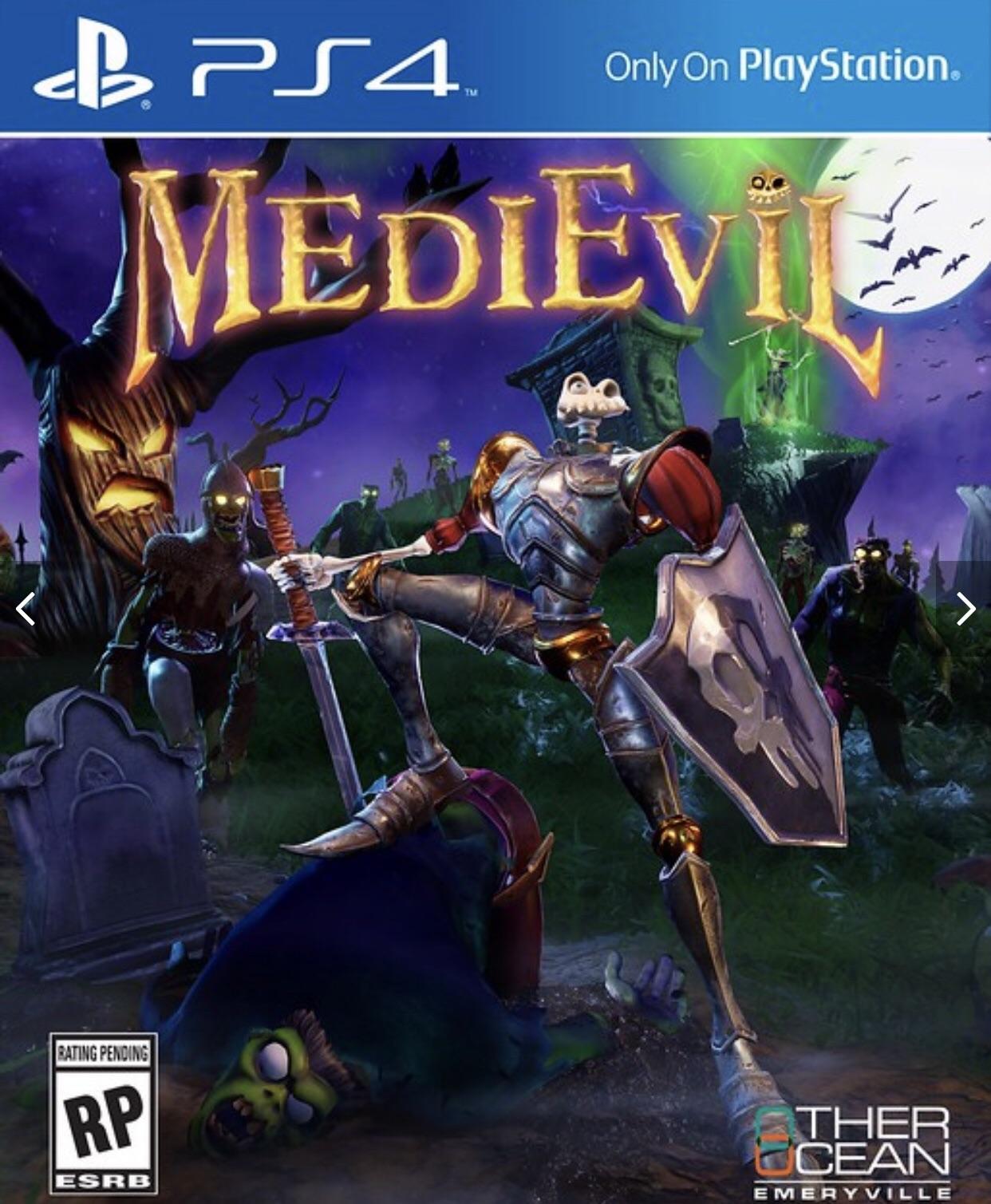 MediEvil is an action-adventure hack and slash video game developed by Other Ocean Emeryville and published by Sony Interactive Entertainment for the PlayStation 4. It is a remake of the 1998 PlayStation game MediEvil. It was released on 25 October 2019

Take My Tone #37 - THE DEREK TRUCKS BAND vs SLEEPMAKESWAVES