Cases and Puzzles are quite intriguing

Cutscenes are incredibly animated and presented

Some Minor Convolution that is easy to miss

I love how we’re seeing remasters or re-releases of some the best titles to grace Nintendo’s last generation handheld, for the Nintendo Switch. While some may be questionable, others quite deserving for a the newer generation of gamers to experience. The Layton Series will always be one of the best franchises to grace the puzzle-adventure genre. Laying the foundation upon it’s inception on the NintendoDS, and inspiring an entire generation of titles that we have been so lucky to experience. While many comparisons were thrown around between the Professor Layton and Phoenix Wright Series, the Layton franchise mastered it’s craft by implementing incredible “brain training” excercises, rather than a standard “who dunnit?” puzzle format. Maintaining it’s stance, the series has a certain diligence presented within itself as it would come to be known as Nintendo’s most charming puzzle adventure series. Bringing the adventure over the Nintendo Switch was a no-brainer, with the hybrid console showing it’s true potential within the handheld market. The Layton series potentially finds itself quite at home on Switch, and shows it has an even brighter future presenting itself in glorious HD, stunningly remastered cutscenes, a cast of relatable and lovable characters and of course it’s ever incredible puzzle-play which will have players ultimately engrossed for hours.

Releasing first for the Nintendo3DS in 2017, Layton’s Mystery Journey: Katrielle and the Millionaires’ Conspiracy saw players take control of Katrielle “Kat” Layton, the daughter of Professor Layton who has seemingly vanished, and gone missing for a while. Affected by this, Kat seems to suffer from night terrors of her father’s whereabouts, but has decided to take it upon herself to fulfill her father’s wishes and open her own detective agency. We’re then introduced to Ernest Greeves, an young, anxious and easily flustered gentleman, who seemingly has a crush on Kat. Ernest takes the role of Kat’s personal assistant, and decides to help on her inquest to find her father, and solve cases while they are at it. Beginning their story, Kat and Ernest meet a talking dog, which was one of the oddest and most randomly placed plot points of the entire series to date, but I digress, who explains to the duo that he has amnesia and doesn’t know who he is. Disregarding and absolutely glossing over the fact that the duo can understand the dog, Kat “John Doe’s” the dog as Sherl O.C Kholmes (an obvious play on the famous Sherlock Holmes). And it is with this first enquiry that the team set off on their adventure.

The gameplay loop plays out similarly to an episodic adventure that allows you the freedom to playthrough multiple cases at one time, which is great for players who need to track back to any past tense altercations that may intertwine with cases that relate with one-another. Certain events do take place between each case that have immediate callbacks that will in turn affect how you investigate each case and the path you choose to take to solve each one. Being able to pause a case, and continue another allows a certain freedom that implements a unique presentation that is barely seen within the puzzle genre. I cannot honestly recall a puzzle adventure title, allowing players to completely put a case on hold, to playthrough an ongoing or experience a new puzzle while another is still active. Incredible development design. It’s almost implementing a formula seen in standard platformers, where you are given a choice of multiple paths to take, while seemingly having to return to it’s inquisition and complete the entire narrative in whole. The intermissions between puzzle-play are mostly of the visual novel variety, mainly interacting with different characters, and enquiring about the events surrounding cases, and taking notes of different clues. You will be presented with different areas to investigate (ala Phoenix Wright) with the standard point-and-click style gameplay that allows the player to pick up on certain clues.

The puzzles will put players to the test, ultimately making sure you are observant with every single detail that has been placed in front of you, but also every clue that has been previously relayed to you. There will be moments that will absolutely have you stumped, but that will also lead the player to retrace their steps, and find either more clues between dialogue, or other hidden puzzles. The title’s ingenuity knows no bounds in implementing said clues, as it will be easy to forget most of these, you may jot these down in your notebook. This feature was certainly helpful, but I would suggest either having a physical notebook, or laptop to write down your clues with, as using the Nintendo Switch’s touch screen was not the easiest feature here. The Deluxe edition of the title included a plethora of extra content that includes, brand new daily puzzles, mini games that separates itself from the usual puzzle play, giving players a break from their daily brain training, and brand new outfits for your characters. The Layton series has forever been praised for it’s incredible animation and unique character design. Returning to the anime inspired surroundings of London, always possesses a certain aura of charm that could only be seen in this series. Interacting with each character and exposing their quirks, is what makes the title incredibly fascinating and delightful.

Like most visual novel titles, we’re presented with some scenarios that have full dialogue presented, while other times are completely text on screen, which in this case is not a bad thing, as it is vital for players to concentrate on each dialogue piece presented. There will be clues that you will not pick-up immediately, but will indeed remember. Presentation is key here, while each scenario on screen between characters are certainly presented similarly each time, there will be changes within the surrounding area to suit the narrative’s progression. Puzzle pieces are well structured, presented with unique ways of solving them. A clue is given with a distinct and detailed description, helping players to easily solve each one. There will be times that you will seem flummoxed by what is presented, so don’t be ashamed to use your hint points that will be made available to you throughout your time in-game. I did find myself using hit points from time to time, as some puzzle hints seemed to be a little less descriptive than others. While some puzzles are presented with an almost “educational” like feel to them, there are others that are quite fun, and vibrant within the experience, that gives the brain a rest from feeling certain pressures. It’s great brain training, and I certainly enjoyed it.

Layton’s Mystery Journey: Katrielle and the Millionaires’ Conspiracy is certainly a must have for puzzle players, and gamers who absolutely love a great story. While some of it will seem a little off-base, and convoluted at moments, it’s all about solving the cases and having fun while doing it. A little brain-training and some animated fun that elevates the experience, while all presented with this adorable design in it’s characters, and delivery. The franchise certainly has a bright future, and a new home on the Nintendo Switch, remembering that it’s initial release was for the Nintendo3DS only excites me further to see what Level-5 could potentially develop for the hybrid handheld-home console. We could possibly see a revamp and brand new engine laid upon us for future installments, and that on it’s own certainly thrills me. The Professor Layton franchise will forever be one of the best puzzle-adventure franchises, and I certainly cannot recommend Layton’s Mystery Journey enough. 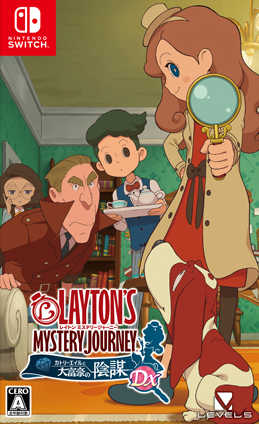 Layton’s Mystery Journey: Katrielle and the Millionaires’ Conspiracy is a puzzle video game developed and published by Level-5. It is the seventh main entry in the Professor Layton series and follows a new protagonist, Katrielle Layton.

Take My Tone #40 – CROSBY & NASH vs CASUALTIES OF COOL