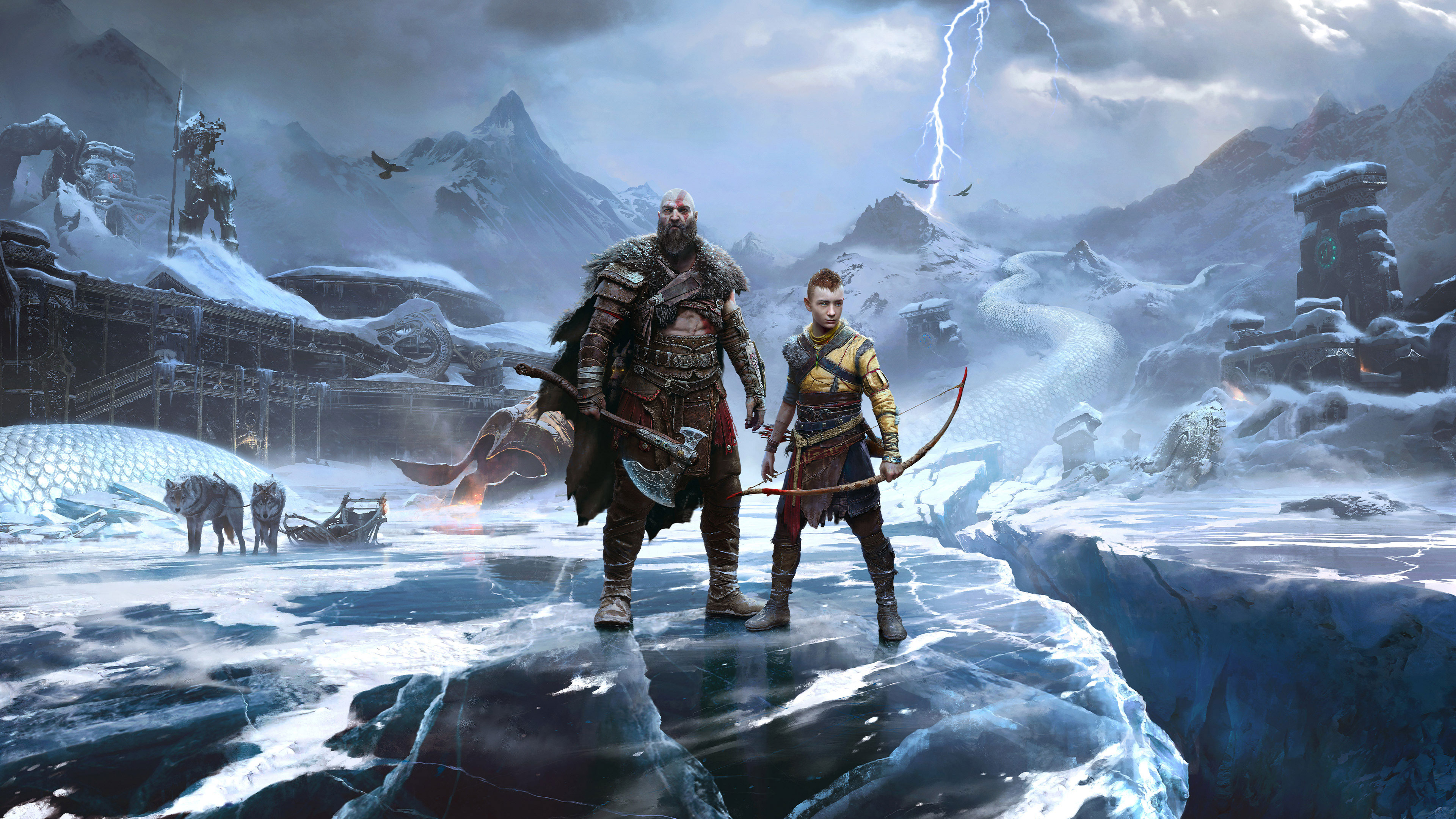 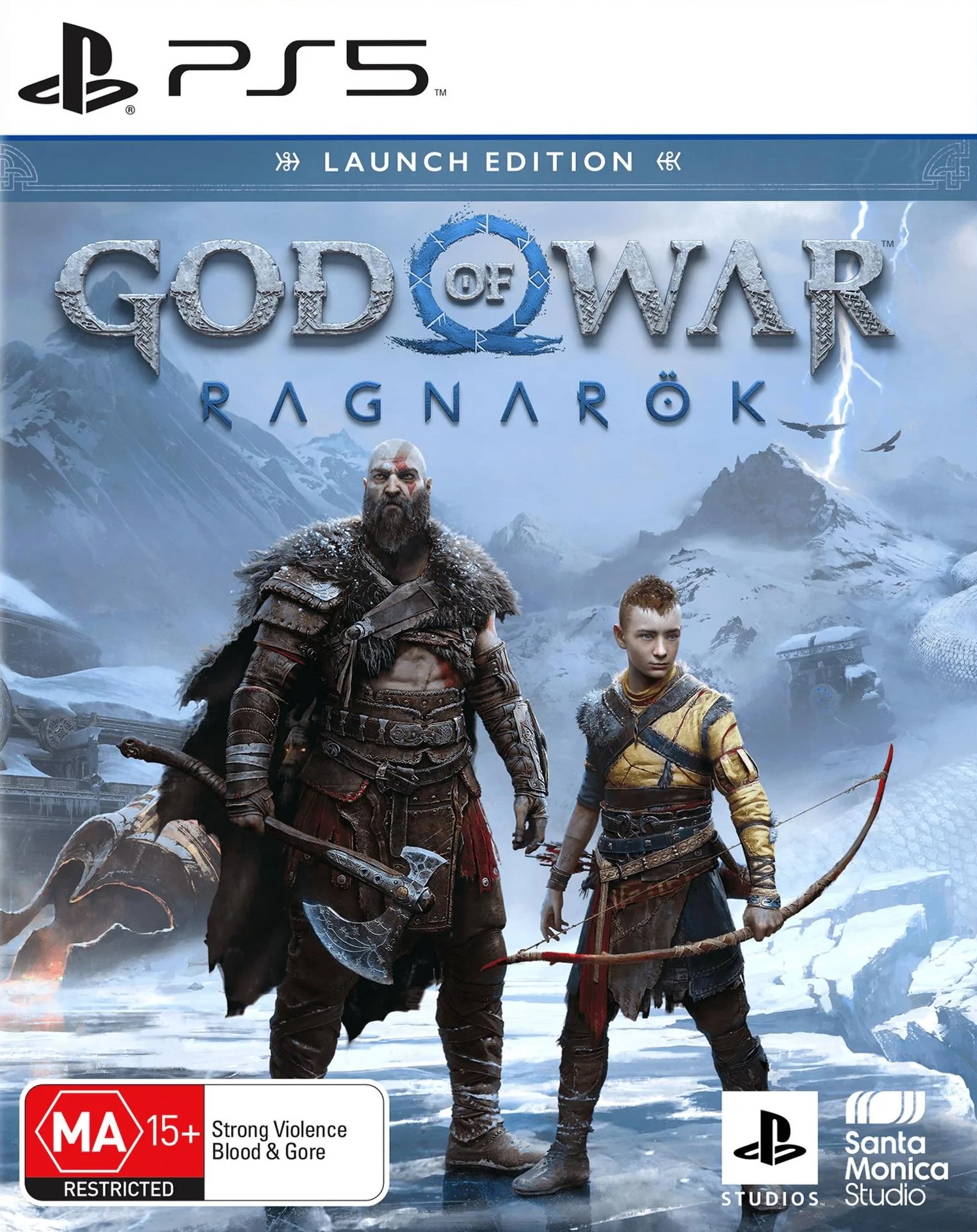 The following review contains minor spoilers for both God of War (2018) and God of War Ragnarök.

There comes a time in everyone’s life where we have to let go and accept that our lives are – in what would be an unconventional definition – a spoke on the wheel, and it keeps on turning with or without us. Whether we control that narrative or not, it’s what we make of it that binds us together or breaks us apart, but only we as individuals have that responsibility to ascertain such knowledge to eventually pass down to generations beyond us. The point is, regardless of how we perceive things now they won’t be the same for long and time will pass us by, as hard as it is for some of us to accept it. This is where we’re definitively are in Kratos’ timeline. The retired God of War is slowly beginning to accept that fact that his offspring is no longer a ‘BOY’, with Atreus’ curiosity beginning to lead his own path in hopes to make his father proud. Admittingly a tried task, it’s one that Atreus seems willing to reach unimaginable lengths to prove to dear ol’ Dad, that he’s not just some mindless kid anymore.

Three years post-mortem, the passing of Faye still has lingering effects on both Kratos and Atreus, with the God struggling to overcome the fact that he’s now left a single father, looking to raise his offspring. The widower continues to mourn without emotion, which could ultimately be explained as scared to show his son any weakness? But I’m no psychologist. Despite this, there’s a bigger threat looming toward their very existence for which the prophecy defines as Ragnarök; In Norse mythology, a tale that foretells the battle and death of many warriors and the destruction of Earth after it’s ultimately submerged in floods following the deaths of Thor, Odin, Tyr and Loki. Kratos’ stance on the prophecy remains unchanged in ignorance, while leading to some form of trepidation that takes he, Mimir and Atreus on their quest to discover the truth and hopefully halt the apocalyptic prediction, and seek some unanswered questions Faye may have left behind without the knowledge of either her husband or son.

God of War Ragnarök begins in the dying days of Fimbulwinter, an arduous cold snap that lasts three summers long. While Atreus is somewhat confounded by the occurrence that resonates what’s stated in the prophecy, Kratos remains resistant and unfazed. The death of Baldur continues to haunt them with Frigg, the mother of the deceased God of Light, persistent in her hunt to avenge her son’s death at the hands of Kratos as seen in God of War (2018). While Frigg’s attempts remain fruitless, things begin to take a menacing turn when the God of Thunder himself, Thor, shows up on the God of War’s doorstep. Upon inviting himself into Kratos’ abode, the pair share a pint to utter silence. The pair stare down until the Allfather, the God of Sky, Death Poetry, Magic and War, Odin makes his presence known.

Looking to make peace for the death of his son, Odin informs Kratos that he will reveal to Atreus his Norse roots and the identity of Loki, the God of Mischief. The discussion is cut short after Thor attacks Kratos with Mjölnir, the hammer the lightning God wields in battle. The pair are whisked off through the ceiling of Kratos’ house and are guided by the hammer’s momentum to an area outside of Midgard, where to two battle it out only for it to be the ultimate distraction while Odin fills Atreus in on Loki and his connection to the prophecy. Upon his return, Kratos is confronted by Atreus, with the teen begging his father to stop treating him like a child and begin his true training to become a warrior for which the God ultimately denies. Atreus deceptively begins his quest to seek out the truth with the aid of Sindri, who guides him through multiple shrines that contain clues to what Ragnarök is and what it could spell for their existence.

While still hesitant to discover the true meaning behind it all, Mimir advises Kratos into listening to his son for once and not to be so quick to shut him down. The Boy was quickly becoming a Man, for which Kratos would have to eventually accept. In one of the most badass moments I’ve had in gaming this year, Kratos informs Atreus that the pair would venture off to potentially halt Ragnarök from occurring not before equipping the Blades of Chaos from retirement, reviving a prolific God of War origins moment that will forever be etched in this title’s legacy. Now, I will preface before jumping into gameplay detail that there is some narrative points that have been omitted to avoid major spoilers, but this is essentially the premise to what is the campaign’s core narrative. For those that have played its predecessor, God of War Ragnarök’s gameplay loop is almost identical with only few tweaks to accommodate some additional features instilled in the Blades of Chaos.

God of War Ragnarök is without question, this year's greatest gaming experience

The Guardian Shield has been revamped for use in battle, not just to parry but in offense. You can upgrade and modify the shield through your inventory upon visiting Sindri or Brok, both whom are also responsible for forging Thor’s hammer which also explains Kratos’ ability to recall the Leviathian Axe akin to the way Thor reclaims Mjölnir. Holding down Triangle will charge the Axe of the Blades with Ice or fire magic respectively for use against enemy hoards which you will encounter in multiple waves throughout the campaign. Finishing moves are executed upon on-screen notification which is assigned to R3. Pressing down on the analogue stick will play out a bloody manoeuvre that will finish off an opponent in gory fashion, to the pleasure of blood-thirsty fans. Kratos may pit himself in battle going hand-to-hand with enemies rather than relying on weaponry by pressing down on L2 or R2, which is accentuated by the God’s rage meter which can be executed by pressing down both L3 and R3 simultaneously to unleash an all out attack, which makes Kratos literally see red.

✔️Excellence from writing, story, gameplay and music. The execution is immaculate on all fronts without question.

Much like God of War (2018), Ragnarok contains a plethora of puzzles and impediments to overcome. This is all shaped in the way you manipulate each hurdle and path, making for inquisitive traversal mechanics, and ingenuity crafted by the great minds at Santa Monica Studios. The all-impressive feats of strength are on display, with Kratos literally moving mountains with his bare hands for himself and his son to walk through. Need to get past a blocked stairway? No worries. Just whip out those Blades of Chaos, move that idle statue right out of the way and head on up, but wait… a tree is in the way? Chop that down with an axe first before you do any of that. Perfection. This is just a sample, a brief synopsis to opening puzzles that get trickier as the campaign unfolds further.

As mentioned, you will encounter swarms of reanimated dead that will mindlessly attack you, and while it can be fun to button mash your way through each frenzy, it can get quite overwhelming; a God is just one man after all. Controlling Atreus, you may command the Boy to unleash a rain of arrows upon enemies within the vicinity by pressing down on Square. Atreus also gets his hands dirty, by aiding his father in close ranged combat, with the pair executing combos on enemies which looks absolutely marvellous. The pair in tandem work like a dream team in Ragnarok, rather than having Atreus lurk to the side while avoiding any major confrontations. To each their own, Both Atreus and Kratos are skilled up after each encounter, and awarded XP, levelling them up for future contests but are also met with currency that can be spent to upgrade their artillery and arsenal.

I will note that the Skill tree will seem familiar, but its overwhelming navigation is can be deceptively difficult for those unacquainted to navigate. Once you get the hang of things, you’ll find yourself skimming through your inventory, re-equipping armour and other assorted carriables throughout your journey. Interactions between Atreus and Kratos prove to be an emotional ride from the onset, with some characteristics shining through some acceptance in the God, for his son’s relatable, human side. Colloquy and anecdotes come in many forms, including sadness, anger, mournful and jocular. There are primitive moments that will be taken away from the campaign with people tearing up, or laughing out loud from things said toward Kratos, and unexpected reactions aplenty; some I’d never thought I would see Kratos ever having to address. Just hilarious.

Aesthetically speaking, the title is a remarkable achievement. A technical marvel that will undoubtedly speak to an entire generation of fans, gamers and developers alike. This is the powerhouse statement that the PlayStation 5 has desperately needed since its inception. Titles have displayed some of the greatest in graphical quips, but God of War Ragnarok takes ultra-realism to a whole new level. From emphatic detail in attire, to the crows feet in Kratos’ aging eyes. The blustering winds that blow snowy environments and carve snowy fields in Midgard, to the sunny mountains in Alfheim, your jaw will hit the floor in mesmerising amazement. A literal masterpiece comes to life in this campaign, and can only be equated or akin to what Uncharted 2: Among Thieves was in technical sense to the PlayStation 3, that is what God of War Ragnarok is to the PlayStation 5; an eye opening escapade that personifies what Norse cinematic action-adventure.

An audio-visual tour de’ force. It’s unequivocally backed by the untouchable performances in our leading pair reprising their respective roles, with Christopher Judge returning as Kratos, and Sunny Suljic in his primary role as Atreus. The pair graft their footprints alongside the excellent compositions from established musician and video game composer Bear McCreary. The engaging score rings out a symbolising tribute to the title’s tribalism roots along with some semblance of darkness and triumph. Just an amazing compilation of tunes to listen to and take note of while even experiencing each cinematic. Honestly one of the greatest marriages in gaming that pours emotion and heart into each pivotal moment within the campaign.

God of War Ragnarök is without question, this year’s greatest gaming experience. Arguably one of the best stories ever told is set to be unleashed into our great medium. From aesthetical design, to technically speaking a gaming gargantuan that’s proven bountiful in not just gameplay, but delivering the ultimate adventure. An emotional rollercoaster that will withstand generations of gamers. One of PlayStation’s crowning achievements is here and its set to raise the bar, wholeheartedly. God of War Ragnarök is an unmissable feat that will surely have fans demanding more from the illustrious Santa Monica Studio. However, the climb to the top may be a steep one, but the God of War and his son have proven that it’s no task for one man alone but a regale of warriors to accomplish.

God of War Ragnarök is an upcoming action-adventure video game developed by Santa Monica Studio and published by Sony Interactive Entertainment. It is scheduled to be released worldwide on November 9, 2022, for the PlayStation 4 and PlayStation 5.

Story
10
Gameplay
10
Presentation
10
Sound
10
10
Supplied by the publisher, for our review. 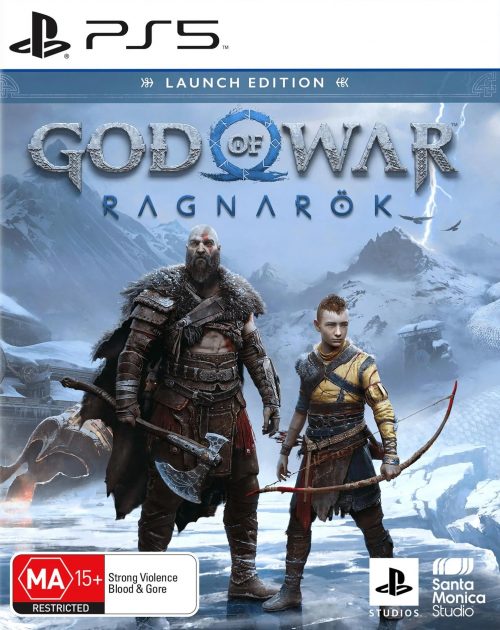