Co-Op does not hold your hand

The Soundtrack is godly

Sidequest grinding can bring motivation to a halt

Being a huge Monster Hunter dork, I was definitely excited to jump into God Eater 3. While I believe imitation can be the sincerest form of flattery, I believe the word inspiration rings quite boldly through your time playing God Eater 3. Yes, there are quite the comparisons that could be made between the two franchises here, with a plethora of enemies or “monsters” to hack and slash your way through, a familiar upgrade system that fans of both franchises could easily skim through with ease, and a co-op mode that allows you to hunt monsters with friends much like recent entries into the Monster Hunter franchise. God Eater definitely takes what is successful in it’s previous entries in it’s own franchise, and up the ante here with some incredible gameplay, an interesting backstory, incredible visuals that are great to look at on the Nintendo Switch, and a soundtrack that honestly sounds amazing and fits each and every environment and action set-piece within the title, and relates itself to telling a great story. However, this is not to say that the game does not contain some gripes, which we will go through here, but I can definitely say that the positives outweigh the negatives with this title, as my 35+ hours with this title were nothing but a joy to play through.

God Eater’s has had a tumultuous history with it’s fanbase, with the first title launching back in 2011 for the PlayStation Portable, much to the dismay of many Monster Hunter elitists, but to fans who were trying to find a fresh JRPG to sink their teeth into. The series has had major success, that of course an Anime adaption to the franchise was produced in 2015, which garnered critical acclaim from gamer’s as a fantastic adaption to the God Eater universe. So now, in 2019 we receive the series third installment to the franchise with God Eater 3, originally released February 8, 2019 on PS4 and PC, and now available on Nintendo Switch, which is the version of the title we’re looking at here in this review. So while we return to the universe, returning players will already be acclimated with much of it’s history jumping right in, being equipped with God Arc weaponry, which all transforms into fire-arms. You will jump right into action, tasked to take down the massive monsters known as the Aragami. Your Character is known as a God Eater, or AGE (Adaptive God Eater), a biologically enhanced human, that can take energy from enemies and build up Special attacks, known as “Burst moves” to deal insane amounts of damage. Your sidekicks, or co-players will also assist you here in building up “burst moves” to deal more damage through out your time hacking and slashing here.

Throughout your time in-game, you will discover eight melee tactics that will help you through your adventure. Each will come with it’s unique traits, but adaptive to it’s reason in nature. Much like many open world JRPG’s, you will have the choice to go fourth with your Story, or explore side quests, and God Eater 3 has side quests a-plenty here. Completing these quests will help increase your rank, to unlock further quests down the line. Taking down Aragami here is so gratifying, it’s cliche “silky smooth” hack and slashing just satisfies every instinct you have to kill your prey here. Co-op gameplay, where it is with a friend or in-game A.I. lands perfectly, once you learn the ropes with your weaponry, making for some fun action sequences. Clearly, animation developed in this game lifts direct Anime tropes that are seen in many television action set-pieces, but make for stunning transitions for your ongoing story. Playing through the game solo will make for a longer experience, but I found it somewhat enjoyable to sink my time into this title, and give my full attention to it’s story which is worth your time.

Now with this being a port of a pre-existing title already developed for other platforms, it did raise some concern on my part going in, as history tells us, 85% of titles that get ported from PS4 to Nintendo Switch, don’t really hold up to par with something as powerful as a fully fledged home console. That is farther from the truth here, as God Eater 3 can defiantly, (Yes defiant. Not definitely, defiantly) stand alone on the Nintendo Switch, with it’s head held high as an amazing port. Now while framerate may be locked at 30fps on the Switch, not once did I experience slow-down, lag, clipping, resolution issues, none of that. I borrowed a copy of the PS4 version off a friend to make some comparison’s between the two, and sure there are some that can be made graphically, but unless you go in with a pessimistic outlook, you’re definitely going to have a hard time finding any problems, or concerns here with it’s portable counterpart. I was astonished by how polished this title really was on the Nintendo Switch, and how it had sunk me for over 35 hours of gameplay.

The official soundtrack of God Eater 3, is incredble. Headed by Legendary Video Game and Anime Composer Go Shiina, currently the lead composer for Demon Slayer, but has composed over 60 Video games, since the mid-90’s and some of the most popular Action-Anime series of all time. The music in this title speaks volumes to it’s action set-pieces, and it’s story. You can tell that the music is not muddled in for the sake of lazy action music for the sake of serious moments being serious moments. It’s hard to believe that a JRPG hack-and-slash title could elate such emotion through it’s background theme’s, but Shiina shines truly with God Eater 3’s incredible soundtrack. Experience is obviously key, and with Shiina heading Code Vein later this year, it’s obvious why he was chosen here to lead this now incredibly popular title.

So, in conclusion. God Eater 3 is incredible. I could easily end with that statement, and be done. Because it is. From it’s awesome combat system, it’s streamlined upgrades, it’s unique weaponry, it’s silky smooth combat that will have Anime fans overjoyed with what is delivered here, it’s rich history injected here, only makes for a an incredible formula of success. Yes, it’s a re-release of a title that has been on the market for months now, but for hardcore fans who are looking for the grind-on-the-go, this is it. This is the one. I can definitely say that my hours with this title are not over just yet, and will probably be looking to hit completion on a game for the first time since Persona 5. God Eater 3, is incredible. 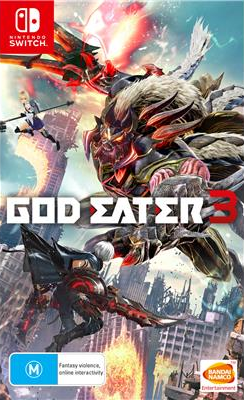 God Eater 3 is an action role-playing game developed by Marvelous and published by Bandai Namco Entertainment. The third main entry in the God Eater series, the game was released for PlayStation 4 in Japan in December 2018, and worldwide in February 2019 for PlayStation and Microsoft Windows, with a Nintendo Switch version released in July 2019.

DASH Gamer Playlist #10 - Korn, System of a Down, Killswitch Engage, The Used & MORE