Welcome addition to the Switch Library

Can come off sluggish at times

Framerate dips can stop the game at times

Devil May Cry, is timeless. I could easily write those five word, give this review a score, and be done with it. It’s self explanatory. But I have to admit, revisiting PlayStation 2 titles are a hard task. Some titles from the PS2 era are totally rough to go back to once you have lept through generation entirely. While still experiencing that era in it’s infancy, it was incredible to play it’s freshest titles as it was so new. Leaping forward another two generations and it becomes almost like a task to even play an hour’s worth. While this may not apply to every single PlayStation 2, or Gamecube title out there, this definitely resonates through a good chunk of games from the past. It’s weird, because we’ve now established that 8-bit and 16-bit titles are absolutely timeless. Super Mario Maker points this out perfectly, and even titles such as Celeste echo this. But if we go back to some of the greatest hits of the PlayStation 2 era, it’s a rough trot. Some of the supposed classics we remember playing, weren’t as polished as we remember them to be. Obviously, working with obsolete technology is something to take into question here, as simply put, Devil May Cry’s re-release for the Nintendo Switch is a straight-up port of the title from the sixth generation of home console gaming. Does that make Devil May Cry a bad game? No. Does it make it a bad game in today’s standards? No. Would this attract a new market? It definitely could, for those who have not ever played the series, and have been somewhat interested in giving it a go.

Devil May Cry’s re-release is for the fan. The hardcore fan of the established franchise to play the title on the go. We’ve seen the original trilogy’s HD Remaster on current-gen platforms with a somewhat mixed response. PlayStation fans have had an outpouring of requests to see the trilogy hit their beloved PS VITA. But it’s understandable why the hesitation to publish this title on a system that was completely D.O.A. (Dead on arrival). Now with the success of Nintendo’s Handheld-Home Console hybrid, Devil May Cry see’s the opportunity to grind itself, right at home or on the go… pardon the pun. For myself, it was personally a homecoming that I felt very welcome to. Being a huge fan of this series, playing this at home, at work, or on the go was incredible. I never thought i’d see the day where I could take the original Devil May Cry with me. Now the game isn’t that long. Infact, completing Devil May Cry is only a 6-7 hour feat. If you’re a completionist like I was as a kid, It would take you around 16 hours. But for reviewing purposes, getting accustomed to how the game feeled on the Hybrid, I spent a good 10 hours playing the title.

For those who have not experienced the original, the plot is simple. Dante is the cocky and characteristic head bounty hunter, and owner of Devil May Cry. He is approached, or attacked, by Trish who informs him that she is in pursuit to hunt down demons who killed her family. She explains that her attack against Dante was nothing personal but to test his skill and to see if he could personally take on the demon emperor Mundus, the evil overlord that had wiped out Dante’s family. Dante is aware of Mundus’ return, which he and Trish now head to what looks to be an abandoned castle and here’s where the real fun begins. Exploring the castle, you will battle many different demons that come in various shape-shifting forms. Difficulty will seem a little unbalanced here, but that’s all part of fun, in revisiting older titles. Collecting orbs, to gain weapon, and health upgrades are vital to progressing through your tenure in the game. As you upgrade, you will also learn different styles of attacking various demons, as they will possess unique ways to attack you themselves. Tracking these is easily accessible via the inventory. Simple on-screen GUI for the game keeps tabs on each of your attacks made, with a systematic ranking scale of Dull (D) to Absolute (A).

Now obviously, this pales in comparison to what we now have as the standard combo system we see in current-gen Devil May Cry titles, where developers have now utterly mastered the way Dante ultimately flows through each attack. Rankings aren’t so much metered here, more or less, it’s counted by how many hits you make in a matter of time. Speaking of presentation, the only jarring thing coming from the title here, is how the GUI, Menu’s, cutscenes, and hubs are all still presented in 4:3 ratio. I can understand wanting to keep it as true to the classic release as possible, but having a remastered re-release with the gameplay in 16:9 ratio, then having the rest of the title in old school “four by three” can seem a little “lazy” in the porting department. None-the-less, it’s nothing too major, and doesn’t take away from the main experience of the title at all. The only major part of this port that seemed to be a let down was sudden frame-dips in the middle of heavy boss battles, that at times bought the game to a standstill. Whether that’s technical translation from the original hardware the game was released on, or the port itself being compatible for the Nintendo Switch console is up in the air, but hopefully can be patched.

Graphically, the game is dated for Television screens. This is solely for handheld. It’s evident by the way many of the textures in the game are completely lifted directly from it’s PS2 life-cycle and recycled here in this port. I mean, you are totally free to play the title however you like here, but for people who are now playing current-gen titles on the daily, on their big screen TV’s, it’s not the best look. The game is made to play in your hands now. Unless you do want to bust out an old CRT, and an HDMI converter, it’s genuinely jarring to play on anything larger than the 6.2″ inch screen given to you, directly on your console. Hearing the game’s soundtrack brings back so many memory’s of gaming as a kid becoming a teen. Hearing the cathartic themes that match the medieval tones of entering the castle for the first time, then slinging your sword at demons to heavy rock, which honestly made me fall in-love with the heavy metal/punk rock genre in the first place. (Yes, there are pictures of Jet Black-Spiky Haired, Disturbed/Weezer shirt wearing, baggy jeans attired Dash, somewhere.)

It’s easy to list a game’s faults in review form, rather than tell you how much fun I personally had playing Devil May Cry, and although many of the faults could be nitpicked, Devil May Cry on Nintendo Switch still gives us an undoubtedly solid experience which I thoroughly enjoyed. Being able to button mash my way through different portions, had me tense like I was fighting for my life, trying to get through hoards of these creatures. While difficulty may have been somewhat unbalanced, the game was so much fun to dive back into. It was wary about going into the very first title in the series almost two decades later, but it’s epic plot, amazing cast of characters, it’s incredible lead, and no doubt it’s fun in exploration just makes this game a classic that every gamer should experience. Devil May Cry, is timeless. 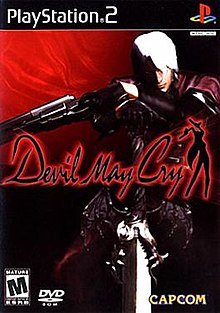 Devil May Cry is a hack and slash action-adventure video game developed and published by Capcom, released in 2001 for the PlayStation 2.