DMC's Combo System is so much fun

Has the full package; Gameplay, Story, and Music.

There is no other action series, that will have my undivided attention like Devil May Cry. For someone who will always be attached to it’s brazen mechanics, that hurl you into a whirlwind of virtual masochist intent, it’s unjust nature with it’s dark and gritty story will always touch that little dark place in my heart, for it’s amazing plot-line with a cast of deranged characters, and their dark humor that brings out the best side of this incredible franchise. Returning the series to it’s original continuity, Devil May Cry 5 resurrects it’s familiar side, that includes it’s masterful combo system, that a novice in a button mashing frenzy, would have a devilishly good time with. But for experienced gamer’s within the franchise, will be enamored with the franchise-title’s return to form, being able to re-master it’s deadly combo engine, with fresh and innovative styles that allows players to improve each character’s unique repertoire.

Devil May Cry is king in the hack-and-slash genre, there’s no question about it. Dante’s traditional cowboy gunslinging, warrior sword wielding, is in full force here, with Nero’s new look, complete with a brand new robotic arm known as a “Devil Breaker” that allows players to customise their attacks against demons, with each arm purchased through Nico’s inventory, using Red Orbs. However, the introduction of V, has set fourth an unorthodox style to the genre, which reinvigorates how we play DMC. V, wields his walking cane and poetry book, embedded with his initial (“V”) across the front. V’s unique style of attack can definitely come across confronting for players at first, almost confusing, but once getting a grasp on how to control Shadow and Griffon, V’s demonic acquaintances, the subtlety and grace in defeating demons, almost becomes poetry in motion. Landing a final blow with V’s cane is a some-what satisfying feat. Much like past titles, each character will have upgrades available to their skill-set, which will help pull off those sweet combo’s, that you may also learn in DMC 5’s training room “The Void”, which can be accessed from the game’s home menu.

Devil May Cry 5 has a task in selling it’s game to newcomers to the franchise, with an 11 year gap for gamer’s who have either never played an entry into the series, or have forgotten the original arc, but DMC 5 pulls it off quite well here, giving players an accessible backstory placed on the game’s home menu, allowing said newcomers to jump right into the series from it’s fifth iteration without having to backtrack on their own. The campaign starts you at a climactic part of the story, re-introducing you to your protagonists in the game fighting antagonist, Urizen. The opening scene leaves you with a great cliffhanger, and from there you’re following a timeline that sends you back and fourth between the aforementioned event, with all three protagonists set with different aims, but one common goal in mind. It wouldn’t be DMC, without massive ego, and it’s obvious, Dante and Nero would clash constantly throughout story, where as V’s character is so introverted, that even the melodramatic antics between the two brash silver haired hero’s, doesn’t seem to faze him. It’s what brings an amazing mystique to V’s character.

Presentation, is a sight to behold. Using Capcom’s RE Engine, Devil May Cry 5 is easily the prettiest looking game out right now. From the amazing design in character models, you will definitely understand why this game was in development for so long. Some of the close-ups leave you understanding the detail that really does go into making a character model in modern gaming, from Dante’s facial hair, Nero’s sparkling teeth, right to the pores in V’s face, it was quite obvious that there was love crafting each model, even to the disgusting and slimy exoskeletons of each demonic enemy. Not only does each character have amazing depth in their design, but the dark and gritty scenery around you is as immersive as you could imagine a post-apocalyptic demonic takeover would be. Mixing all this with the elegance and grace of slashing, shooting, and mauling each demon with their sharp assets in hand, each beautifully designed with malicious intent.

If there was one gripe I had, it would be each cut-scene ending with a pause, and fade-out. Something I believe that modern gaming has moved past. I found this quite strange giving the game’s incredible design, that having in-game engine cut-scenes simply whirl it’s in-game boom cam behind the antagonist, was the now the norm but was not present in this title. I believe this feature keeps gamer’s in the element, and does not take their focus away from what is happening on screen, giving our attention spans are getting shorter and shorter every year, an opportunity to look away from your TV screen, to your phone, is something that anyone in entertainment should not take lightly. Despite all that, Devil May Cry 5 deserves your undivided attention, as there is so much to take in, even the two seconds of darkness on screen, gives you a quick breather to soak everything in, and move onto your next objective.

I would be remiss to gloss over the amazing sound design and music. From the violent slashing of swords, to the bloody blasts of Ebony and Ivory, and now the unique style of reading poetry while electrocuting your enemies, it’s only natural to blast heavy metal while kicking demonic ass. The growls of demons, with “Devil Trigger” playing alongside your battle, as you slash them away to nothingness, make this unruly combination so satisfying. You may also customise this option in Nico’s Jukebox from the main menu, with a selection of music to swap out, and use for each protagonist. I would also like to mention, the voice acting in this title is absolutely marvelous, probably the best the series has ever had to offer. Voice acting in old school titles, always came across a little cheesy, and ineffective, due to technical limitations designers had on old hardware. Now with such life-like design, comes amazing performances from voice actors, that makes you emotionally connect with these characters on screen, that only amazing dialogue from dedicated writer’s from the DMC franchise could offer.

We have seen many a studio attempt to recreate the magic that Devil May Cry brings to the hack-and-slash genre, but nobody can pull it off like the king. Devil May Cry 5 delivers on all accounts. It’s the return to form that fans of this amazing franchise have been clamoring about, for over a decade now. It’s the ultimate love letter to those who absolutely adore this franchise. I speak for myself here when I say that I loved Ninja Theory’s ideal reboot to the franchise with DmC: Devil May Cry, but has nothing on the series original arc. It’s low risk-high reward accessibility that allows any gamer, casual to hardcore, to easily pick up and play. Fast paced, violence, with blood pumping action, an amazing storyline that ties up loose ends from previous entries, and amazing callbacks, that will have any hardcore DMC fan devilishly grinning from ear to ear. 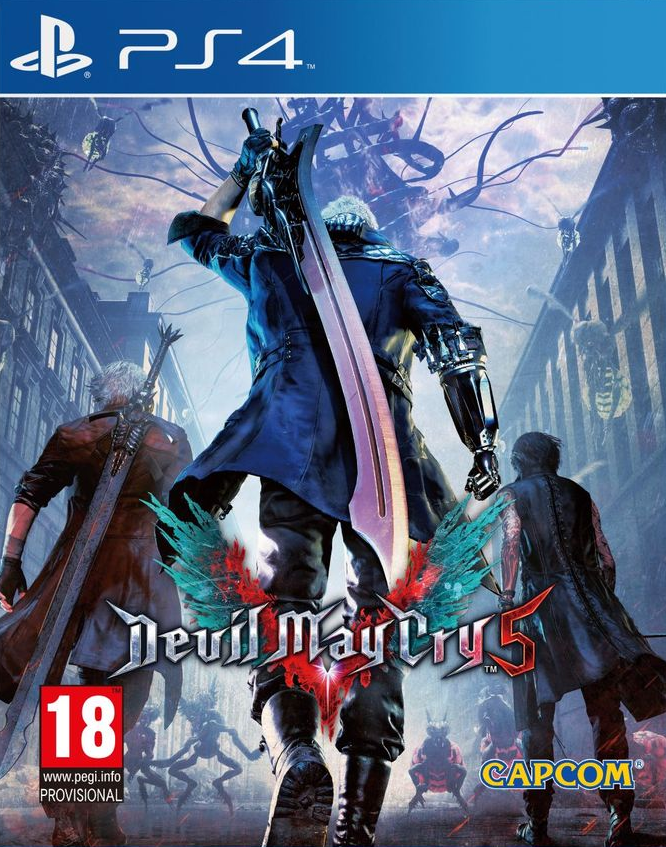 A Review code was supplied by Capcom on PlayStation 4, for this review.

Devil May Cry 5 is an action-adventure hack and slash video game developed and published by Capcom. It is the fifth installment of the mainline Devil May Cry series, and was released on 8 March 2019. Devil May Cry 5 received a positive reception from critics and fans alike.