Going off the rails, on a Crazy Train! 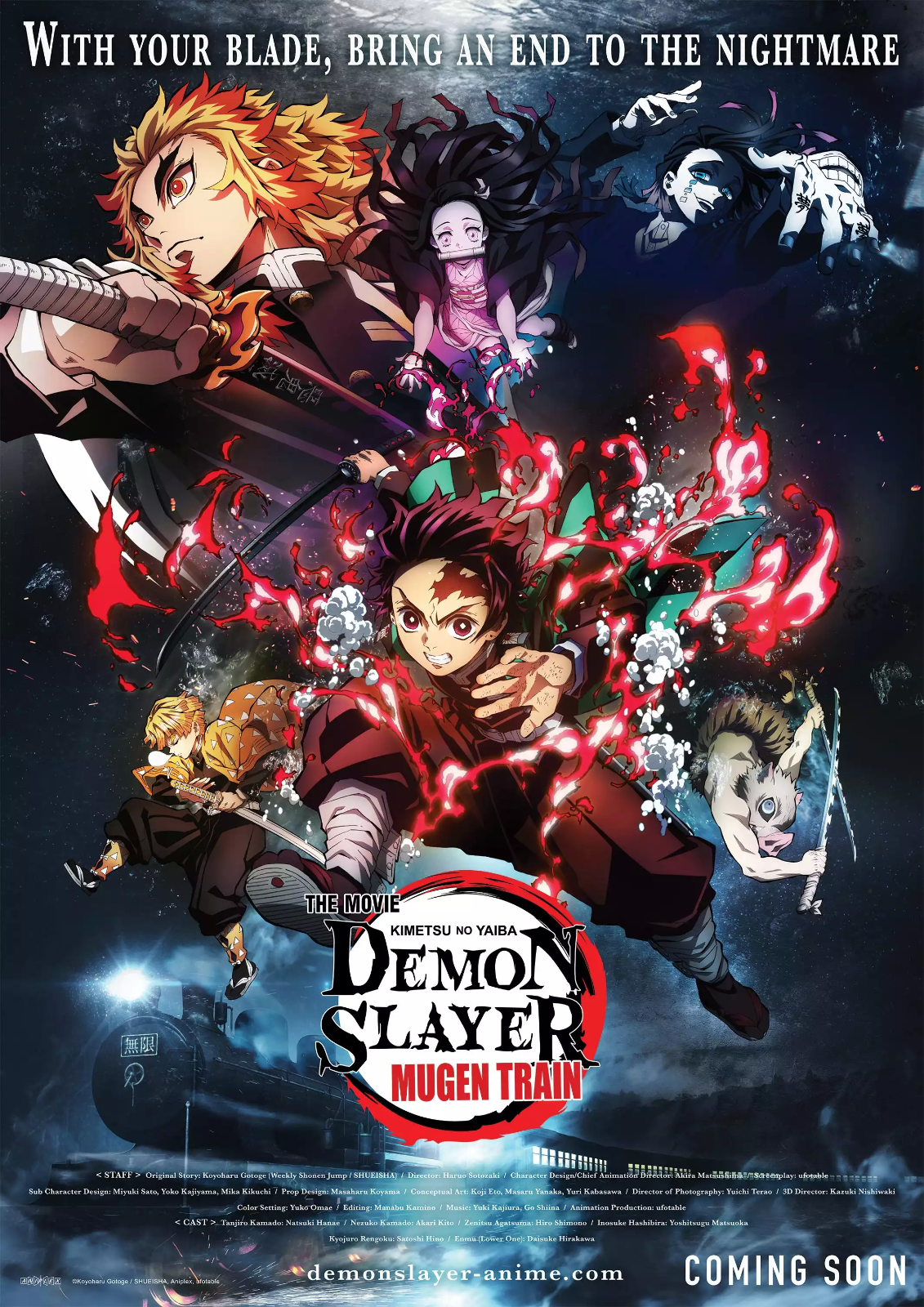 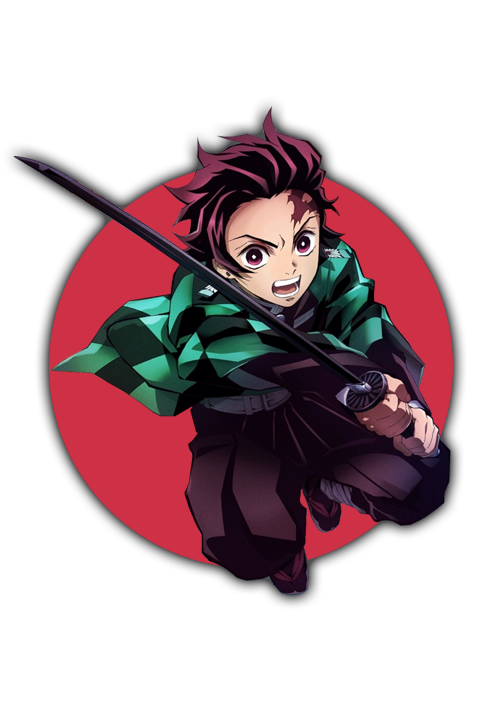 Demon Slayer continues its dominance within the anime space with a canonical follow-up to its second season. Kimetsu no Yaiba: The Movie - Mugen Train or Infinite Train depending on which translation you prefer, is a movie length anime adaptation to the long running Manga series, with events taking place between Chapters 54 to 69, otherwise known as The Mugen Train arc. Given the success of the television series, it was only a matter of time before Japanese animation studio Ufotable, attempted to bring forward the source material's most popular portion within its sequential narrative. Production of Mugen Train began in late 2019, with early stages suggesting the third season would open with its premise taking place on the haunted locomotive. The impact of the COVID-19 pandemic persuaded the production studio to deviate from this notion, and follow through with its initial concept of recreating the plot in one thrilling epic.

Immediately following the season finale of Demon Slayer's second series, the animation team wasted no time in attempting to begin the long process of the feature length's production, amidst the uncertainty of the global pandemic shutting the entire world down. Fundamentals of Mugen Train's development process were slow and steady, with safety of Ufotable, Toho and ANIPLEX staff at the forefront, while the entire team delicately worked on the title during the height of the Coronavirus. It was a race against the clock to finalise the film, just before April of 2020, where ANIPLEX were pleased to announce that Demon Slayer The Movie: Mugen Train would release in theatre's (in Japan) on October 16, 2020. Japan were seeing an ongoing success rate within the pandemic, which saw the film release nation wide to over 400+ theatre's. Breaking box office records, it grossed over 4.6 Billion Japanese Yen ($57m AUD) in the movie's opening week.

Tanjiro, Nezuko, Zenitsu and Inosuke infiltrate the infinity train in hopes of finding Renjoku Kyojuro, a Flame Hashira of the Demon Slayer Corps. Hoping to obtain information from the swordsman, the group are confronted by Enmu, one of the Twelve Kizuki. Using magic, the Demon forces the clan into a deep slumber in which he tries to keep them incapacitated by manifesting within their dreams and destroying their spiritual cores. This would in turn keep all four protagonists in a lifeless coma, leaving them brain dead. Enmu tries his best to strike a deal with them, allowing the group to live out an eternally peaceful dream state in exchange for their cores. Each dream would emphatically project longing desires for each hero, including Tanjiro reuniting with his family. Although rejecting the devious deity’s request, he indulges the teenager with apparitions of his late siblings, alive and well.

Sobbing with unequivocal grief, Tanjiro runs up to them and hugs them tight while apologising for not saving them. Meanwhile, the lusting ambitions of Zenitsu lead out his fantasy of dating Nezuko, while Inosuke bizarrely explores a cave and Rengoku dreams of meeting with his younger brother, Senjuro. Although this blissful state of paralysis could entice our heroes in staying in this imposed state, Tanjiro forces himself awake after a vision of his father instructed Tanjiro to kill himself within the dream. As he awakes, Nezuko burns the magic ropes that are tying all passengers down in this comatose state, but immediately attack Tanjiro. The young Demon Slayer does his best to fend off the persuaded passengers, while Nezuko wakes the others. Overcome with such emotional trauma, Tanjiro beheads Enmu.

Although decapitated, Enmu still lives forging his head with the infinite train itself taking on its mutant form. On Rengoku’s command, Tanjiro and Inosuke hunt down Enmu’s neck while the Flame Hashira and the Young Demon protect the carriage full of passengers. Enmu’s ability to penetrate through a person’s conscience is heightened only by his victim staying within the circumference of the aforementioned vision. The dead center is where their spiritual core harbours, and contains the strongest point of that person’s desire. The outer area of each dream is said to be an extension of the victim’s persona, with Enmu’s power to manipulate each false-reality. The dreamweaving demon directs his minions to invade each person’s dream via the group’s magic rope, hoping to confiscate their spiritual core following out the early stages of his plans to eradicate the Demon Slayers. 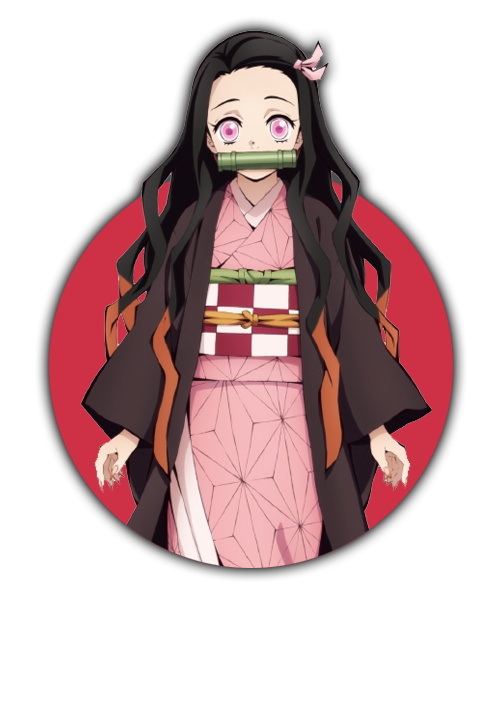 Boy, oh boy… what an epic joyride. This has to be my favourite Japanese feature length film in years. The palpable presentations and beauty bestowed within this art piece is unmissable. There was so much to dissect and connect between both series and the film itself. The beginning had me somewhat confused as to how it followed on from the events of the anime’s second series but began to slowly tie-in major plot points. There are subtle hints of where the series may be heading with Kimetsu no Yaiba – Yūkaku-hen (Demon Slayer Season 3), however nothing is explicitly stated among the obvious resolve in curing Nezuko of her Demon-like trance. The premise of the film is engrossing, if anything captivated by its setting. Surrounding sequences while encased within the confines of a speeding locomotive, fending off a demonic creature that emulates a person’s desires are trapped within the arms of Morpheus. The lust for an encroaching yearn within each protagonist is immeasurable, and satiated by their comatose state.

It’s scary to think that a perfect world would be moulded and manifested, purely to drive a stake in one’s heart and manipulate their ambitions all to destroy their livelihood. The chilling sight of Enmu was enough to send shivers down my spine; his pale complexion, stoic demeanour, and gratification for pain and suffering were just disturbing. An absurdly far-fetched yet marvellous hook that creates this incredibly creepy antagonist that carries this arc insanely well. After events that took place late in the second season it was great to see Rengoku make his return, as possibly the series most popular supporting character. With his trademark fiery mane, the Flame Hashira does his best to guide the crew. The façade he displays in being a clueless dork, contrasts his sharp skills and fearless personality. Each character’s juxtapose does strike comically, while Inosuke’s eagerness does nothing to help their situation. Nezuko’s role within a majority of the movie is quite minor, but imperative in certain set pieces.

The film features a perfectly paced plot, given that it’s predominately placed within a fixed setting. The idea of switching scenarios and environments through supernatural causes made for dramatic effect. Entrenched in its challenge of awareness, I questioned what was real and what had been created by the demon. My fascination for worldly manipulation was in full consideration, contemplating every possible outcome that could potentially lead to a successful adventure for both Tanjiro and Nezuko, as we head towards the next season. My mind is still racing, if anything digesting every single sequence that was carefully crafted. The animation in the movie is absolutely stunning, encapsulating everything that made the television series a sublime demonstration, with enriched vibrancy, the fluidity of each action scene and gleaming gorge that had me mesmerised through lighting and shading. An enthralling feat by Ufotable, that once again, sets the bar high for an industry standard that will be surely difficult to follow.

Demon Slayer: Mugen Train, quite magnanimously continues to credit creators of this illustrious franchise. The movie does everything right in terms of keeping things fresh throughout its ongoing saga, but entails the profound gesture in luring newcomers to the series itself. Connecting with the audience on a personal scale is important, and I believe when emotions run high, it gets the better of a person while viewing material that’s completely fictionalised. Demon Slayer is the only Japanese animated series to this day, that has made me well up – just a tad. A continuous trudge for finality purges through our protagonist; a resolve to save his little sister, no matter the cost. A passionate struggle with a mixture of personalities met along the way, whether they be friendly or foe. The anthesis of Demon Slayer unfolds its many segregated fragments and branches that allow original chapters such as Mugen Train, to take a life of its own. Salivating, I anticipate the series return later this year with a potential climax on the horizon.

A youth begins a quest to fight demons and save his sister after finding his family slaughtered and his sister turned into a demon.

A pass was provided by Madman, for this review.