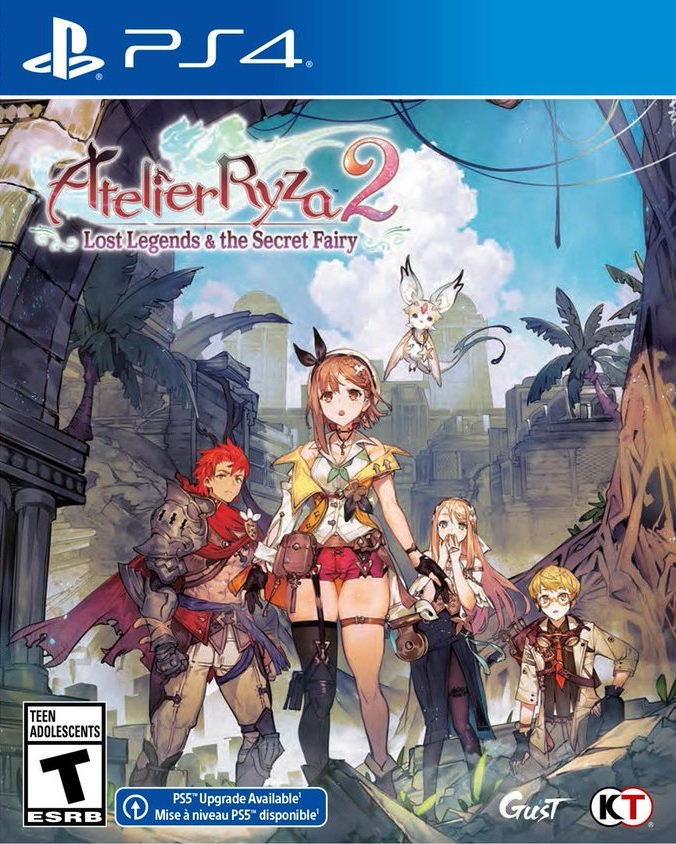 Atelier’s renaissance with the Ryza series has been nothing short of spectacular. Heightening its core narrative beyond its predecessor’s separate arcs, and shown growth through its bountiful deviations made from its variants prior to Ryza’s initial entry. While the Atelier franchise will always carry heavy elements of fantasy and alchemy behind its legacy, a dose of realism goes a long way for a series that aims to reinvigorate, and refocus. Sure, it may be a bold risk drastically changing the core fundamentals that have made the Atelier series a success, but the long-running JRPG may have needed this refresher after its quality of life was slowly diminishing through a monotonous litany of sequels that seemed to simply copy its tried and true formula, with a quick band-aid approach each time.

Devotee’s can turn a blind eye to a reproduced experience one or two times, but turning the other cheek to another entry entailing the exact same framework would have most certainly been disastrous. Luckily, Japanese development studio Koei Tecmo, were aware their keystone RPG series was in dire need of a new arc, with an all new protagonist that changing the dynamic in delivery and characteristics. After playing Atelier Ryza, and knowing which direction the franchise was heading, I was overcome with a sense of relief that I was able to reconnect with Atelier on a personal level, after a near decade of skipping the series entirely. Admittedly, I overlooked Atelier Ryza’s initial entry prior to any sign of its sequel appearing, but its campaign material had reignited an old flame from its glory days and lured me back into its warm embrace.

Continuing Ryza’s journey fresh off her initial escapade in Atelier Ryza: Ever Darkness & the Secret Hideout may have been one of the best ways to enjoy this astounding follow-up. Atelier Ryza 2: Lost Legends & the Secret Fairy see’s Reisalin “Ryza” Stout, the young aspiring alchemist, continue her wild adventures back on her home of Kurken Island, three years after the events that had transpired off the coast of the enclave. Now leading a quieter life as a teacher to the island’s youth, she begins to feel complacent as her expeditious side has taken a backseat for her subtle approach in career choice. Choosing a life of solitude, she had placed her aspirations of being a high class alchemist to the wayside in favour for her figurehead position. Feeling the anxieties of her newfound intimacy, Ryza plans to travel into the capital city of Ashra-am Baird in hopes of rediscovering her powers.

Atelier Ryza 2: Lost Legends & the Secret Fairy has the potential to be 2021's JRPG standout title. It encapsulates a boastful display in vibrancy sprinkled with moments of dull and tedious aesthetics for compelling notice, and the return of favourites

Along her journey in town, the young hopeful reunites with old friends Klaudia, Lent and Tao, after Ryza is gifted an old family heirloom from Moritz Brunnen. The Rainbow Jewel beings to glow unexpectedly, guiding Ryza to her next adventure. The premise itself was a little confounding, almost forced but its commonplace within anime tropes that tend to lead in its “perfect” narrative structure. While it would have been a little perplexing having Ryza gather an all new party for her latest expedition, her ragtag pack of characters from its prequel envelopes the heart behind this specific chapter, in her respective arc. The subtle call backs that are scattered within each member interactions make for some of the best moments in the story’s second chapter; omitting a key character from its prequel would have had dire consequences, not only for its narrative but the overall dynamic.

Understanding Ryza’s resolve, her journey becomes more of a conquest in hopes of regaining the confidence in becoming Kurken Island’s leading alchemist. Knowing her bubbly personality contrasts a deep slump that follows her throughout this tale, only motivates you to pursue this new adventure to help the overzealous, unequivocally ambitious adventurer. There are some deviations from Atelier Ryza’s initial foray that works in its sequels favour. Like Ryza herself, the gang are on their own life-journey to discover their own personal goals. A sign of growth within the once youthful group, now blooming adolescents with an agenda at hand. Personal struggles come to light within the evolving narrative with Lent showing misguided struggles that he tries his best to mask with his chiselled physique and charming wit, but it all comes to light after a flurry of fate further tries our friends, which ultimately puts their backs against the wall.

After the story slow boil, it takes off after meeting with Fi, the titular “Secret Fairy”. After acquainting itself to the globetrotter, Fi becomes quickly attached to her warmth and caring nature, tailing the heroine wherever she goes. Unable to communicate, the Fairy’s body language and reactions tend to give off a vibe, personality or simply guide Ryza throughout the campaign. Exploring the hazardous and deathly ruins on the outskirts of town, you come to discover the meaning behind the fairy’s existence after plundering its dark depths for clues. It can be a bit of a trawl, but upon completing this task you will find it open an assortment of possibilities in Ryza’s newest expedition. So there is one thing that I must mention here; its vital – if anything crucial that you play Atelier Ryza’s first entry, or you may not appreciate its sequels events. There’s a ton of continuity and inside jokes that would go completely unnoticed if you were to skip it, and head into Lost Legends & the Secret Fairy.

✔️An endearing follow-up that tries our heroes and their personal resolve.

✔️Once again, a touching story that will no doubt tug on heart-strings.

❌A slow boil that can be convoluted at times, but rapidly rises from the ashes for an incredible escapade.

Much of Atelier Ryza’s sequel is comparable to its predecessor in many ways. It’s once again, basing its core mechanics off its successful blueprint. There are some additions made but much of its gameplay loop stays the same. Along with returning items such as Scythe, Staff, Fishing Rod, Axe, Bomb Rod and Hammer; new tools such as the Emerald Band allows you to explore certain dungeons with a multi-style delivery that in turn helps with your objective’s overall progression. Linkage Synthesis has been overhauled, now allowing you to fill Material Loops with certain ingredients to create weaponry, tools and healing potions. The new Essence feature pushes you to alter an elemental feature within the Material Loop, unlocking a litany of unestablished potential in each item.

Other than the aforementioned resources, much of Ryza and her party’s proficiency and prowess remain identical from their previous adventure. The free-form turn based combat is a staple within the current climate of Japanese role-playing titles, but the option to switch out to traditional battle without the hassle of real-time strategy would certainly be appreciated here. It can be confronting and quite confusing to hand out specific orders while engaging in battle with the worry of certain members falling. Keeping track of HP and AP (Action Points) can be arduous, but is stabilised through the UI’s streamlined design. Utilising your AP to trigger skills, the Tactics meter increases with hopes to boost each skill.

There are some subtle improvements made in the sequels presentation and overall aesthetics. Water mechanics have been completely re-rendered to mimic more of a realistic fluid-like structure. Diving into the water and exploring certain secrets within Ryza 2’s vast terrain, makes traversing a lot of fun here. There are some challenging moments where I did find myself almost trapped in battle with zero hope of winning or escaping, so that “fun”. But idea of upfront challenging moments that pushes the envelope further than anticipated makes for such a captivating and compelling campaign. Adorned once again with Ryza’s cast of charming characters, and their welcoming personality, its hard not to fall in love with its story that completely parallel’s its prequel. While Atelier Ryza was whimsical, Ryza 2 delivers a steadfast intention to will our characters their conclusion. An alluring objective.

Atelier Ryza 2: Lost Legends & the Secret Fairy has the potential to be 2021’s JRPG standout title. It encapsulates a boastful display in vibrancy sprinkled with moments of dull and tedious aesthetics for compelling notice, and the return of favourites (including some easter eggs for the Atelier devout). Ryza’s grounded approach makes her arc an essential piece of the pie for gamers who appreciate trial by leadership. Its display of hope and courage within our strong female protagonist proliferates an urgency to pursue her escapade, not only for herself but her band of hopefuls. The once cheery group faces their personal challenges of growth in this latest chapter; a confronting spectacle that touches on a personal level for many and will undoubtedly tug on some heart-strings. Atelier Ryza 2 is essential gaming in 2021.

Atelier Ryza 2: Lost Legends & the Secret Fairy. This story takes place three years after the events of the previous game “Atelier Ryza: Ever Darkness & the Secret Hideout,” and depicts the reunion of Ryza and her friends.

Story
8
Gameplay
9
Presentation
10
Sound
9
9
Supplied by the publisher, for our review.
Steam Playstation 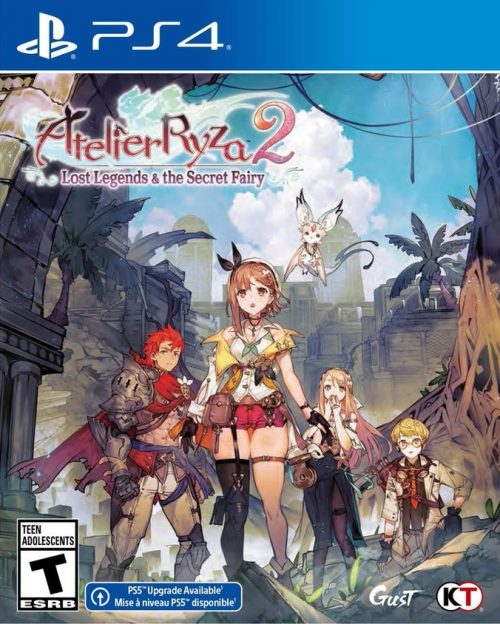