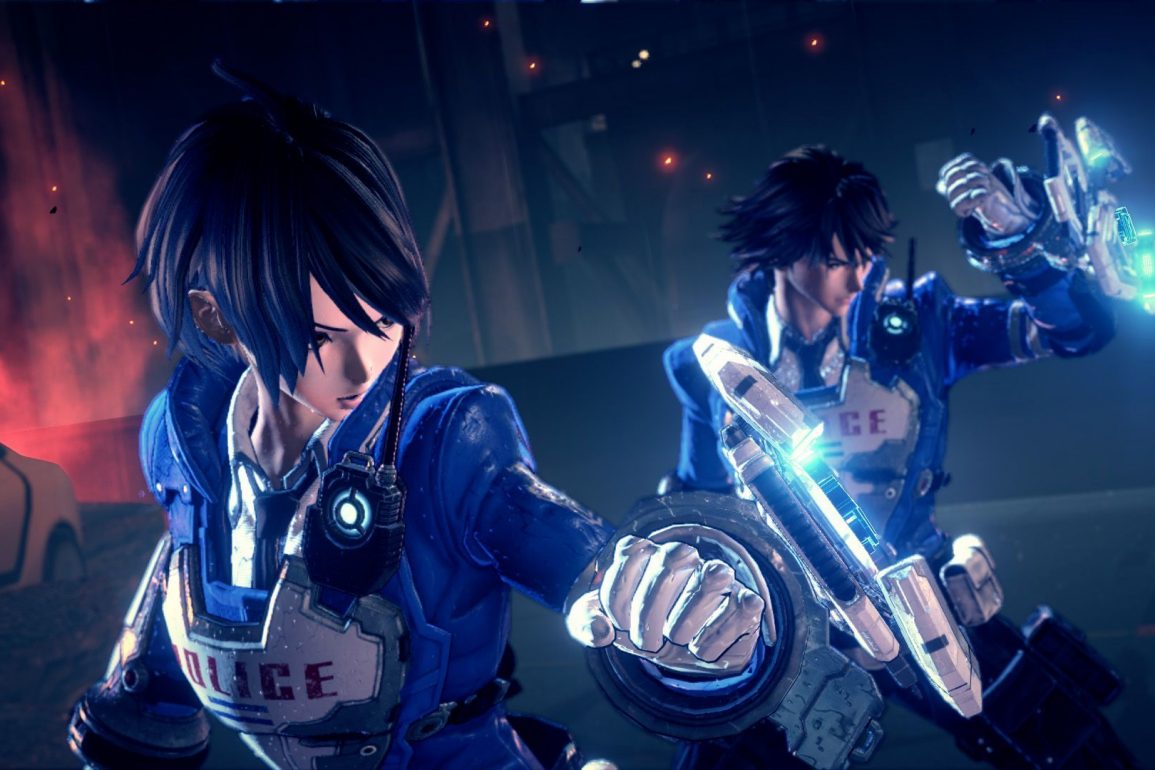 I’m stunned. I’ll be honest with you, when announced, Astral Chain looked incredible but was not on my radar. It was a title that I thought was going to get a passable grade, but would honestly fall short of some of the historic developer’s, classic hit titles. It comes off the back that PlatinumGames, while maintaining a strong reputation within the industry, fell into a somewhat slump after hitting a wall with Scalebound’s development back in 2017, after the project was unceremoniously canceled. The Japanese developer had given us some all-time classics such as MadWorld, Wonderful 101, NieR: Automata (published by SquareEnix) and of course the franchise “Platinum” is most renowned for, Bayonetta. But while those title’s may hold grandeur, Star Fox Zero, Star Fox Guard, and Teenage Mutant Ninja Turtles: Mutants in Manhattan were making lukewarm impressions on gamer’s and critics within the community. While opportunity to work exclusively with XBOX Game Studios, may have been ultimately passed up due to lack of true potential and a development time-frame (that lasted a near half-a-decade), Platinum once again sought refuge with Nintendo, turned a 180° on potential disaster, and have released what could very well be it’s pièce de résistance.

Astral Chain delivers an action-packed hack n’ slash cross third person shooter, that blends the magnificence of a desolate environment that’s packed to brim with mystique and mass visual appeal. Takahisa Taura bought his masterful design that earned him critical success from NieR: Automata, and placed it right into the contrived and futuristic realm of “The Ark”, a megacity which humanity have retreated to for it’s survival from a progressive war, and the brink of extinction. Set half a century from now, the 2078 see’s earth in an existential crisis with an inevitable takeover from inter-dimensional creatures that are code named “Chimeras”. Residing from the “Astral Plane”, the wreak mass havoc amongst the human race with the plan to corrupt humanity, poisoning them with “red matter”, a crystalised debris that is left across The Ark, in a Chimera’s path of destruction. It is from this point we are introduced to the Neuron Police. A specialised task force that is deployed to cleanse the city from red matter, and to stop any further destruction the Chimera’s may enforce. The force train, and utilise as submissive breed of the Chimera, in which they code name “Legions”, whom act alongside your protagonist when called upon.

Jumping into the game, you are given the choice of a male, or female protagonist with a flurry of customisables to choose from. This all hearkens back to such JRPG titles as the Sword Art Online RPG franchise, where you are absolutely spoiled for choice, however Astral Chain achieves a bountiful amount that exceeds expectations seen from this mechanic in other titles. Whether you do choose male, or female, just know that your main protagonist will stay mute for the entire duration of the game, while your unutilised gender-counterpart, who will be identified by default as “Akira Howard” will provide full dialogue, much like many other main characters throughout the campaign. The two main protagonists of the title, are twin siblings who are adopted by Neuron Police Captain, Maxamilian Howard. While the captain’s shows his stern side towards his children, he is described as a compassionate man with a sensitive side for the people he loves. He trains his two children to become Police Officers, and follow suit to be just as good as he is in hopes they will succeed him. Along the way, you will meet an assorted cast of characters across the board. Brenda, the Chief Medical Officer, Alicia and Jin who will assist you while in-game, Olivie Espenosa a former newscaster now sworn-in to protect alongside our hero’s, along with “Science Genius” and Commander of the Neuron Task Force, Yoseph Calvert.

The game starts you off, right in the midst of a mass attack from a hoard of Chimera’s who are looking to drag as many human’s back into the Astral Plane, as they possibly can. Our hero and sibling dive into the action to fend off as many of the creature’s as possible, only to be outmatched here. This essentially acts as our opening tutorial, giving us the basic rundown of our opening mission and how the gameplay will be throughout our time on The Ark. Given a choice of melee and ranged weaponry to choose, our combat will partner up with use of our tethered sidekicks, and systematic combo’s that ultimately takedown any oncoming enemies. “Legions” are summoned by command, and held upon by chain and are controlled by the player to either directly attack, wrap a Chimera in chains, or divert an enemy’s attention for any opportunity to open an offensive takedown. This plays in part with game’s incredible combo system, where essentially mashing the “ZR” button will allow your character to attack said enemy’s, but hitting the “B” Button on an oncoming attack will dodge your enemies leaving an opening for your protagonist to land a short spurt of physical combo’s that will ultimately leave an enemy incapacitated or completely flat. It’s such a satisfying feat to land one of these, that it almost feels like an accomplishment every time you nail it.

Astral Chain’s incredible control scheme takes complete advantage of the Nintendo Switch’s hardware. Every single button you press will activate an attack, or lead you to a UI choice that essentially could benefit you for future use or even stumble across something that will help you learn a new technique. It can be quite overwhelming at first, but once you get used to it, it’s no different than some of the more complex UI seen in some of the most popular Triple A title’s seen in the past. You will learn how to control your character better, and even teach your Legion new capabilities that will earn you skill points, which will in-turn help you level up while progressing throughout your time playing the game. The IRIS feature in the game proved to be a massive help in times of acquainting not only my surroundings, but learning different enemy types, Chimera traces/paths, and collectables. The RPG elements kick in with the Legions’ own skill tree. You will unlock a variety of Legions to use throughout your duration of the game, with their own unique abilities. Being able to swap out Legions through steadily based combat allowed for creative strategies to be put in motion. This in turn allows players to rethink their ongoing strategy, in moments of crisis.

If comparing Astral Chain to anything seen in the past, I would definitely say it fits with gameplay seen in Bayonetta, NieR: Automata, and the pacing of the current Devil May Cry franchise. It’s a true testament to the title’s Director Takahisa Taura, and key supervisor, and legendary developer Hideki Kamiya. The fast paced hack n’ slash action, truly melds well with the stylish shooting combinations seen in our protagonist, with the silky smooth animations that can only be adapted by all three titles mentioned above. While adapting, the game’s combat system gives it’s own unique take on many of the mechanics mentioned. The brilliance of the Legion mechanic sets a precipice unseen in any game on current generation platforms, ultimately leaving it unrivaled. A true experience you will only get in this game. While similarities will sprout, the boldness delivered here with it’s mix of gameplay, story, and art-style leave you in complete kinship. There are special abilities that your Legion will deliver over time  that will mesh with your base abilities leaving you in moments of complete awe.

The topography around the heavily inspired anime-style design, meets that of an Akira X Blade Runner territory. It is one of the most masterfully articulate designed world’s I’ve seen in recent gaming memory. The expression given to detail in every inch throughout my time on “The Ark” proved to be one that is ultimately visionary. The neon city lights, and true Anime aesthetic bring fourth it’s centered tropes around our cast, designed by artist Masakazu Katsura. The limitless designed harbours the terrain’s true nature. A world bleak of any future, trying to conform itself into it’s own survivalist instinct regardless of breathtaking surroundings. The Astral Plains rings true to a desolate area, conspired by the demonic creatures who are looking to take over. The title’s performance is absolutely flawless. I played the title for 20+ hours, and struggled to find a single fault, that is until near the end where the framerate dipped in a certain scenario, but could easily be patched out and remain unnoticed.

The soundtrack to this game, is utterly addictive. Truly, one of the best composed playlists from a video game, ever. Award Winning Composer, Satoshi Igarashi, brings his incredible talent to this title, and lays his foundation thoroughly throughout the game’s pacing quite perfectly. The soundtrack’s genre varies depending on scenario and situation, ranging from heavy metal, electronica, synth, and orchestral music. The OP, “Saviour” (Yes, this game has an Anime style OP, which stands for Opening) is performed by lead vocalist, William Aoyama of Beverly, who is known for performing in the OP of Fruits Basket 2019. As an Anime fan, my eyes were glued as the opening credits rolled to reveal the top tier talent that we are treated to in this awesome action-adventure. Brianna Knickerbocker (Catherine: Full Body, Sword Art Online), Cassandra Lee Morris (Persona 5, Fire Emblem: Three Houses), Elizabeth Maxwell (Persona 5, Sakura Quest), and Joe J. Thomas (Hunter X Hunter, Tales of Vesperia) are just the tip of the iceberg of talent across this title. Their performances shine through the story told, with real conviction towards each character they portray. Truly incredible.

Astral Chain brings one of the best action-adventure experiences ever. There is no doubt in my mind, we are looking at a potential Game of the Year candidate within this title. PlatinumGames have truly hit their stride here, and could very well have mastered their formula with this very game. Exhilarating action, intense pacing, fantastic writing, innovative gameplay, it’s challenging yet motivative, breathtaking in design, compelling and cool. This is what you want from a video game. Delivering it right in your hands, or your TV screen, Astral Chain proves to be one of Nintendo Switch’s best title’s ever delivered by Nintendo and Platinum. It proves we are entering a generation where developers are now ready to push the envelope in creativity, not only in gameplay, but in aesthetics and pure design. Where we’re treated to true cinematic experiences across all major platforms, that deliver some of the most expansive worldliness that can only be achieved by a plethora of untapped potential in gaming. This is it.
Astral Chain is one of the best video game’s of 2019. 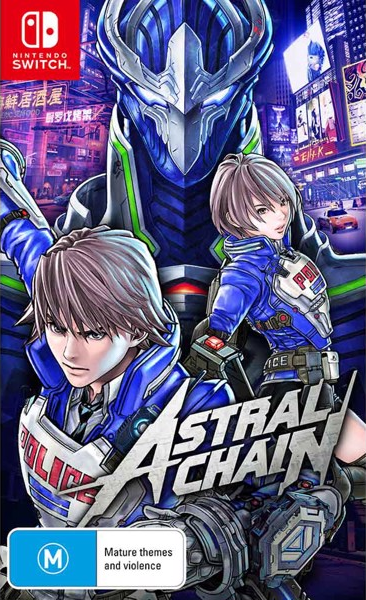 Humanity’s last chance against an interdimensional invasion is a special living weapon called the Legion. As a rookie officer in the elite police task force Neuron, you and your Legion will work together to solve cases and save humankind. ASTRAL CHAIN gives you full control over two characters at once for thrilling Synergetic Action, courtesy of PlatinumGames.