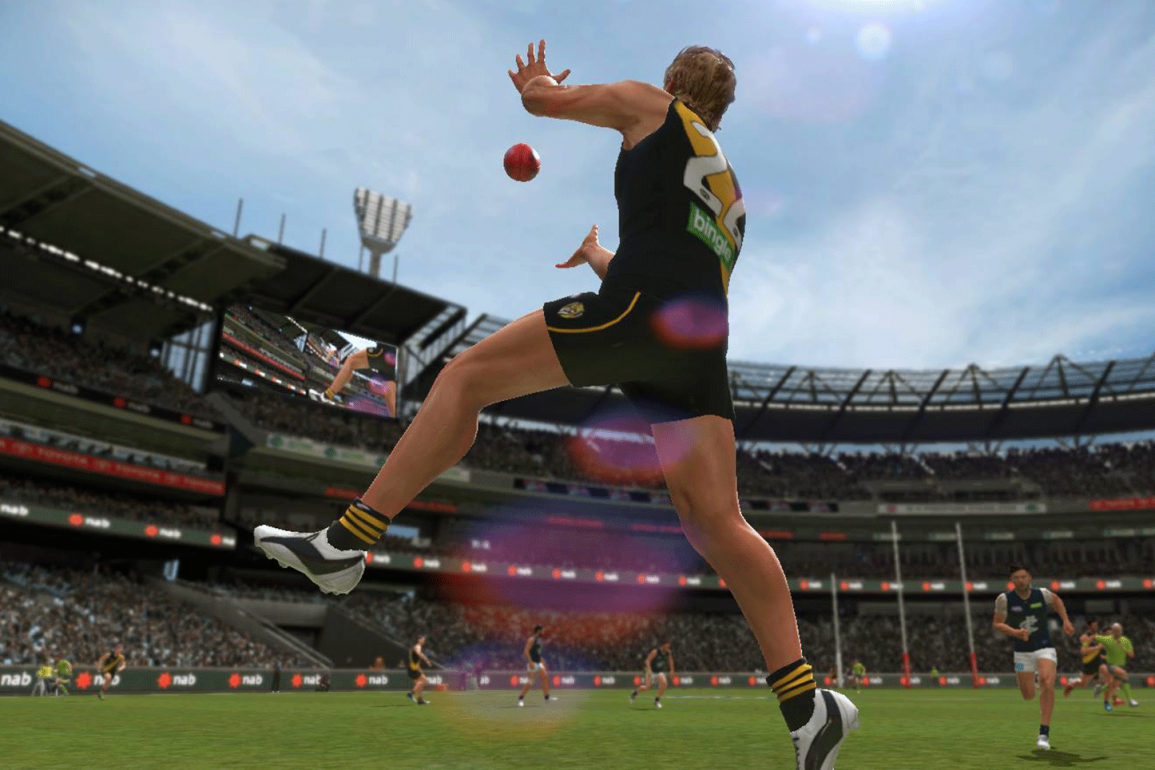 ✔️A playable handpass.
✔️Huge roster of players to choose from.

Oh boy, where do I begin with this? So I’ll be completely honest, I held off reviewing this title as much as possible before giving my final thoughts. While there is some level of expectancy to come from a sporting title I will note, AFL – in my mind – has always been questioned in how the sport itself would be translated into a fully fledged video game. Logically, it seemed inconceivable. It almost feels impossible to generate the exact ebb and flow the sport’s nuances produce in real-time. With the AFL being our country’s premiere league, it wasn’t a question of “IF?”, it was more a “WHEN?” will we see the definitive adaptation of a great footy game in our hands. Well, we’re still waiting. I will hand it to Melbourne based developer, Wicked Witch Software and their attempt at delivering our great game to us, while we await its grand return.

While it may scratch that itch many fans are desiring, it’s hard to label this title as an incredibly polished and true to nature, AFL experience. While the obvious comparisons are being made by gamers who quickly jump to EA’s legacy library, the numerous franchisee’s that the million dollar developer handle have a completely different level of expectancy than the smaller Aussie-based studio with a limited budget could cater to. With that said, sure there is some leeway given towards AFL Evolution 2. But make no mistake about it, while there may be some slight adjustments made within this sequel, labeling these as “improvements” are an overstatement. Yes, the title’s core gameplay mirror’s its last entry with some slight updates to its massive roster, but in-turn what you are given here is almost a replica of “Evolution’s” last entry.

Deeming the title somewhat playable, in my 30+ hours of game-time I experienced a number glitches and bugs that had me hard-resetting the title. In my first exhibition match, I was rewarded a free kick from the 50 meter line, but the title had other ideas and decided to soft-lock me from kicking the ball. My player had been completely frozen with the opposition standing face-to-face with me. It was an immediate cause for concern, and would ultimately set the stage of what I was to experience throughout my time with this title. There is nothing life-like about the title that grasps any natural mobility in it’s core mechanics. Controlling every player felt identical, with individual stats rendering themselves ultimately useless. I compare its robotic nature to that of playing checkers on a chessboard.

From pillar-to-post, it felt like a digital game of hot potato. Kicking and passing the ball from player to player felt cumbersome, and made me disengaged with what was happening on screen. Tackling animations remind me of the early 90’s PlayStation Pro-Wrestling titles; It’s tough to grasp how stiff the controls really are, with players on the field trekking the ground like they’re floating on air at times, rather than the seamless and smooth efforts that are seen in a franchises like FIFA. Yes, it really is hard to not throw that comparison out there, but it’s evident. The usage of one hard camera throughout each match is something that I still disagree with. Many moments and highlights that could be produced by the title are missed, but the negligible stance could be avoided by switching to a close-up shot, rather than looking on from afar. It’s almost like controlling a colony of ants, wearing AFL Guernsey’s.

Entering the Coach Career Mode, I expected an improvement from the title’s singular exhibition display, however upon playing the management based role, I came away feeling rather despondent. The thought of taking control of an entire team, and heading towards Grand Final season seems like an exciting task. Evolution tries its hand in giving gamers ultimate control over staff, the players, and monetary management in such a bare-bones approach. I compare this to SmackDown! Vs. RAW 2006 General Mode with the Coach seemingly working from home on his laptop, conversing with players through email. To be frank, I did not complete my season. In its effort to simulate what life is as an AFL Coach, the experience falls flat due the title’s limitations.

Be-a-Pro tries to re-establish a prominent career mode for created AFL players, but delivers a sub-par experience that will make gamers question the trivial hurdles that seem to be placed in the way of ultimately delivering a satisfying experience. While yes, becoming a star may be hard in the real world… This is a video game. The aim is to entertain and have fun, and due to the disparity that impairs any form of seamless progression, its quandaries stack-pile itself here. With many core mechanics at fault in full display, the judgement that had been misplaced on my character were unfair. To be demoted and promoted inconstantly had me questioning the title’s gameplay loop entirely, and how imbalanced it really was.

Gameday is a neat addition that works much like 2K’s “Today” or “Match day” feature, depending on which title you play. Following real-time scheduling of AFL Footy matches that are to be played, is a neat feature for the hardcore devotee’s that would love to simulate the experience before the game goes live. Given our current circumstances, I can’t fault Wicked Witch here. With the current season in lockdown, there are no matches scheduled at this point so I was unable to experience the mode first-hand. Regardless, having the option to jump right into a preset exhibition of two teams that ready to go head-to-head that exact day, makes for an exciting feat. I applaud Wicked Witch for engaging with such inspiration, and trying to apply this within our great game.

Now comes my initial cause for concern, Presentation. Right out of the gate, the title itself is far from anything that you could describe as “polished”. Gauging a “somewhat” comparison, I experienced the title on both PlayStation 4 and Nintendo Switch, however it seemed almost unfair to the developers themselves. Notwithstanding, anyone reading this review with intentions of purchasing the title for the Switch, in hopes of gauging a mirrored experience. So let me begin with Nintendo Switch. The game is unplayable. Dropping below 11fps is hurrendous QA, and should be rejected from even going gold. The fact that it was placed to market, with the exact same label would risk the title’s own tarnished reputation across other platforms. Not only this, but the reputation of Wicked Witch and the AFL themselves.

The PlayStation 4 version is playable. Once again, far from polished, but would certainly fill the gap left by the season’s current absence. Graphically speaking, AFL Evolution 2 looks like it was ported from the Nintendo GameCube. There’s nothing revolutionary about its aesthetic appeal, nor does it try to set any form of establishment. Once again, it would be unfair to compare this to anything else on the market due to the sports unique display and niche fanbase, yet judging the title on its own merits I would consider it tolerable. The overall design felt quite deadpan, with in-game models looking very template based and emotionless. I try not to judge sports games on crowds, due to technological limitations in rendering hundreds of models on screen, but to have every single person in the crowd motioning the exact same animation seemed passive.

AFL Evolution 2 is an admirable attempt. I respect any developer that would undergo taking up the tough task of translating our unique sport. It’s not like any other sport in the world, and the mechanics displayed here show that. AFL is hard to translate, even in words to people who have not experienced the game live. While I would love to say that this title is an authentic, Aussie Rules Footy experience in your hands, I just can’t approve of the numerous dilemma’s it carries. If there was anything positive to take from the title itself, it’s that AFL Evolution 2 is a playable experience, but one you would ultimately walk away from questioning its existence.

AFL Evolution is a video game based on the AFL developed by Wicked Witch Software and published by Tru Blu Entertainment in 2020. 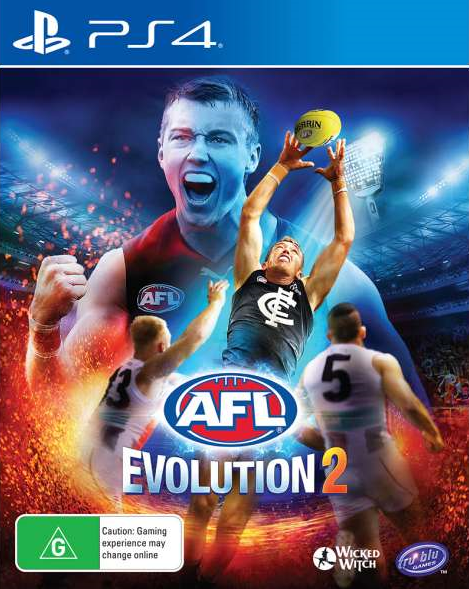 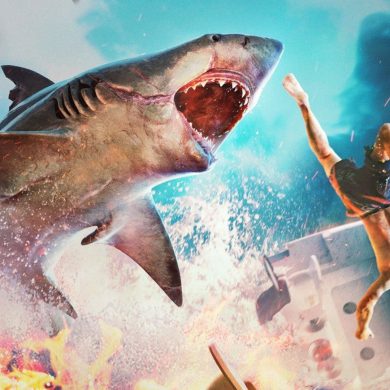